Durand Cup: The “EYELIT” and the “Apple of Indian Football” 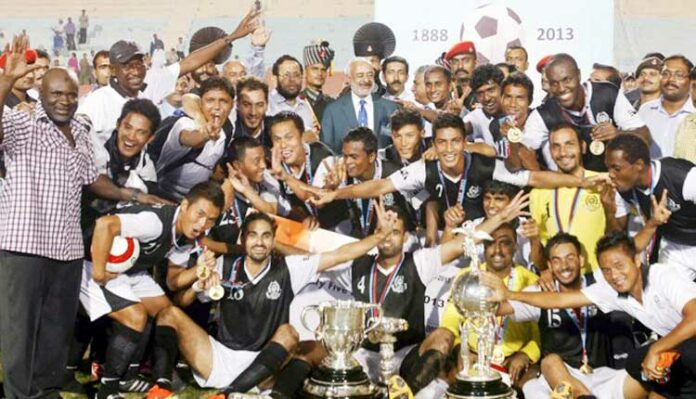 It was and it were the Britishers who were ruling India and they had brought a HELLUVA of British Soldiers posted here in India to serve them. These Soldiers were OK till the moment that they were up there for their duty and training, but once it got over the entertainment and the pastime that they enjoyed in Britain was something which was making them HOMESICK and a lot of them started feeling sick and were losing their mental strength to perform their duty.

It was at this point of time decided that to pump and to keep these Soldiers fit and fine Football, Athletics and Hockey tourneys will be played in between the British Soldiers and its different unit based at India and with this the football DURAND CUP came into being in existence.

The Durand Football Tournament or Durand Cup is a football competition in India, whichwas first held in 1888. The Tournament is named after its founder, Sir Mortimer Durand, Foreign Secretary in charge of India from 1884 to 1894. It was he who SOLELY and SINGLY found the money from his pocket and his salary to conduct the entire tourney, then. It was he who was responsible for this tourney to start at India and this was the FIRST Football tourney which got reeled on the pitch for the British Soldiers to fight it out here in India.

At first it was effectively an Army cup, where the permission was given only to the British Indian Army to participate and play in this tourney and largely the preserve of the British Indian Army troops in India, but over the years, it widened its appeal and opened up to civilian teams, until it became a more open and conventional sporting contest. It is now held at New Delhi in 1940 but from its inception till 1939 it was held in Shimla where the British Army HQ then was based and it was the British Army in India which use to organize the tourney. As said earlier only the British Army based at India at various places participated in this tournament, but for the FIRST time in the annals of the Indian FOOTBAAL relating to the Durand Cup BORDER REGIMENT which we now call it as BORDER SECURITY FORCE participated as an Indian British Army unit and they surprised one and sundry by reaching the finals and winning the finals by 3-1 by beating the British Scott Army by 3-1 in the finals. That Border Regiment had seven Gorkhas and two Muslims playing for them.However the credit was credited to the Britishers as that unit was completely under the British Army which was based at India.

Spurred by the success of the Border Regiment and looking into the state of football, which had beautifully developed at Calcutta, then the British Army HQ decided to open out this tourney for the Indian teams as well and the tourney was shifted to Delhi from Shimla as to make the travel arrangement easier and better for the Indian teams participating. The categorization was MILITARY TEAMS and INDIAN CIVILIAN TEAMS then.

Mohammedan Sporting Club of Kolkatta became the first Indian team to win this tourney as the CIVILIAN INDIAN SIDE in 1940 when they beat the ROYAL WARWICKSHIRE REGIMENT by 2-1 in an absorbing final.

Once the Britishers left the shores of this country this tourney went to the ARMY unit of Indian defense and the Army under the President of India every year hosted this tourney from 1947 to 2006 where it was decided that the CIVILIANS unit of the football body at India with the help of the Army would stage this tourney every year. Following India’s independence in 1947, the tournament was hosted by the Indian Army, with the Durand Football Tournament Society being headed by three Service Chiefs.

THE DURAND CUP IS THE ONLY CUP/TOURNEY IN THE WORLD WHICH WAS HELD FOR 59 YEARS UNDER THE AGESIS OF THE HON’BLE PRESIDENT OF INDIA.

This adage of Delhi-Jai was taken from the Pakistani lips by the followers of Indian football and as Delhi use to hoist the TWO very important Football tourney, the DURAND CUP and the D C M Trophy the wins in both the Trophy used to be described as the DELHI-JAI by the scribes if the teams won both the trophy in the same year They would refer it as the particular team has won Delhi by winning both the trophy in the single football calendar year.

It is ONLY East Bengal who on two different occasion won the DCM-DURAND Trophy twice in the single year The occasion were-:

1). 1952 East Bengal beat Hyderabad Police 1-0 to win the Durand Cup first and then beat the 5/8 Gorkha Brigade by 4-0 to win the trophy terming them as the FIRST Indian Team to achieve the DELHI-JAI

2). East Bengal shared the Durand Cup with Mohun Bagan in 1960 and then beat Mohammedan Sporting by 3-1 to win the DCM Trophy Thus it became the ONLY team to win the combo of this Trophy twice to label to have won the DELHI, ie DELHI JAI for two consecutive occasions.

3). In 1976 BSF Jullundur first shared the Durand Cup Trophy with JCT Mills Phagwara and then shared the DCM Trophy playing a goalless draw with the Hangyang University of South Korea thus becoming the second team in India to achieve the honour of being DELHI – JAI team

4). The youngest Indian player to have played this tourney was Peter Thangaraj He was only 15 years of age when he represented the Madras Regimental Centre to play his first game in the Durand Cup

5). Mohammed Habib is the Indian player who has the distinction of scoring 12 goals which is the highest number of goals scored by an Indian footballer in this tourney

6). Odafa Okelie is the foreigner who has scored the most number of goals by any foreigner in this tourney

Play the tournament on this line, on this set methods and principles, and see the wonderful change that this tourney could throw- both in terms of the players that could be the feeders for the future of the Indian team This will make the tournament very attractive.

Another suggestion is as this tourney is held by the committee that compromises of the officials of the defense personnel’s, it would rather be better if there are at least ONE Army team or at the most two invited from he foreign countries That would give this tourney a cutting edge that it requires This will make the tourney as well as the Indian football a world of good.

It is just that a change in the structural system in holding the tourney ought to be applied and the result that would come out would be really sparkling This is the need for the moment and for the future to make this tourney a cream of the football tourney held by India especially the Indian Defense committee that holds it.