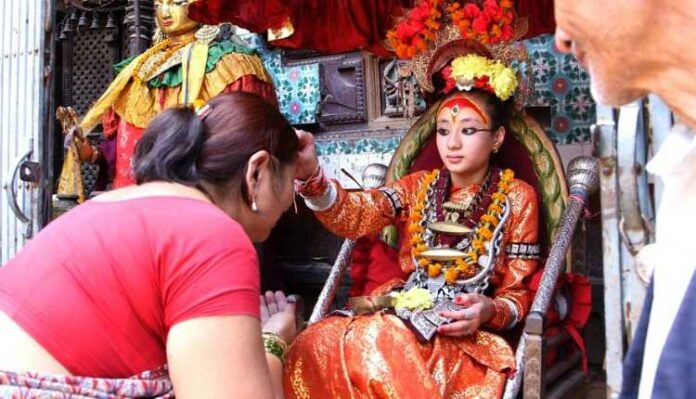 Nepal is a small bordering country of India near the foothills of Himalayan ranges. Nepal is popularly known as the home of the highest peak in the world, Mt Everest, but is also popularly known for its famous temples and monasteries. Nepal is a Hindu and Buddhist dominated country. In Nepal, there is also a very controversial tradition of the living Goddess, Kumari Goddess who holds a very significant honoured, religious position in the country. Nepal’s inhabitants take the Kumari Goddess as Goddess Durga’s living embodiment (Goddess with many different forms). Kumari Goddess is a small virgin girl who has not yet started with her menstrual cycles, and she is believed to perform miracles. Only girls from the Shakya caste of the Buddhist community comprise about 115 families only are eligible to be a Kumari. The Kumari Goddess lives in the Patan Darbar of the Katmandu valley and is believed to look after all the nation’s people, protecting them from any kind of danger or harm. There is a belief that she can forecast misfortune too. During the time of Nepal’s royal massacre in 2001 when the royal prince killed his parents, the king and Queen and all his siblings, that present Kumari would not stop crying for four days. People believe that she was predicting that lousy omen of the death of the royal members of Nepal.

The tradition of worshipping Kumari Goddess has been going on since generations and generations of time. Earlier in the 12th century, during the Malla Dynasty’s reign, there were three main cities of the Katmandu valley, and each town has its own Kumari Goddess. Many of the country’s leaders still seek the Kumari Goddess’ blessing to legitimise their rule. When the monarchy was present in Nepal, the Queen of the kingdom held the selection process to choose the girl who will be the next Kumari, but now the head priest of the temple does the selection process. When the time comes to select a new Kumari Goddess, the eligible families are invited to bring their daughters to the temple courtyard to audition the new Kumari post. The selection process is very rigid; they take the small girl inside a darkroom in Nepal and perform some prayer rituals that the public cannot see, including the little girl’s family members. After scrutinising and comparing the qualities and looking for the signs amongst the eligible small girls, finally, the suitable Kumari Goddess is chosen. This process of rigorous selection is known as ‘Battis Lakshanas’ (the 32 physical perfections). Once selected as a Kumari Goddess, the whole life of the little girl changes upside down. She is taken away from her family home and now has to live in the Kumari palace. She is no longer allowed to stay with her parents and is looked after by the temple priests and caretakers. She is carried everywhere she goes because she cannot let her feet touch the ground to preserve her purity and Godliness. Besides, she is not even allowed to talk to anyone in public except her immediate family. The little girls have no say in this, and even the families believe that it is their destiny and cannot deny it but accept it. The families also go through a lot of change. The families get financial support from the government, and the offerings offered to the Kumari Goddess is also given to them. The families are given much more respect after their daughter is chosen to be a Kumari. 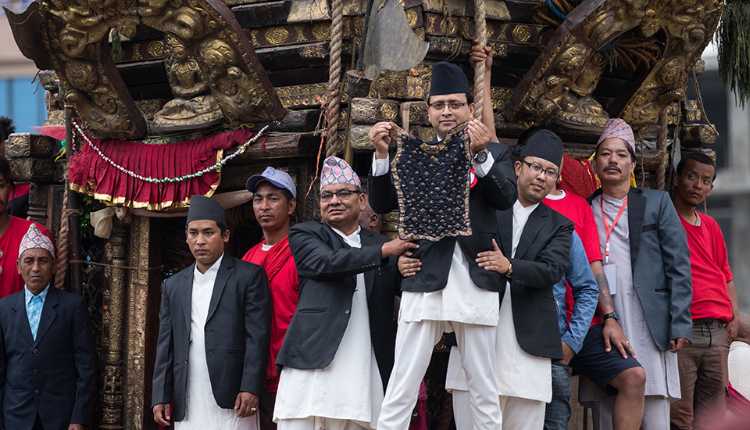 During the whole period of her as the Kumari Goddess, she is confined to the temple. She is not allowed to leave the premises of the Kumari palace except for watching certain religious festivities. One such festival is Bhoto Jatra. Hundreds and thousands of people gather to witness her when she comes from the temple premises so that they get a chance to worship her. She has to accept the offerings (prasad) given to her by her visitors. The Kumari is supposed to be the link between the ones who worship her and the Gods. They pray to her for all sorts of things, such as job opportunities, visa, passing an exam, prosperity, childbirth, etc.

She is only dismissed from her position when she gets her first periods, and after that, a new girl is chosen to be succeeded as the next Kumari Goddess. The former Kumari is given a royal farewell with a lot of respect. Even after she is brought back home, she is treated like a Kumari for the next four days. Only after the fifth day, she can start with her new normal life. In the Nepalese tradition, the period is seen as something impure. During the month when a girl or woman gets her period, she is made to stay in isolation. If she enters the kitchen and touches something, it is believed to turn impure. Some Kumari takes this dismissal positively with a lot of curiosity for starting a new life while some cannot cope with the sadness. One such Kumari remained to live her life as Kumari Goddess even after her dismissal. Her name is Dhana Kumari Bajracharya. She never started her menstrual cycle; however, due to the government’s pressure, public and temple priests, she was removed from her throne as a Kumari is supposed to be a young girl. This Kumari decided to lead her entire life as a Kumari and follow the rules as she believes that Goddess is still within her. People believe that she still has powers and come to worship her. However, when a great magnitude earthquake hit Nepal’s country in April 2015, this lifelong Kumari had to do something unthinkable to her, she had to leave the quarter of her house after three decades and on her foot for the first time.

The youngest Kumari ever chosen was only one and a half year old but was still expected to behave like a Goddess. She is expected to sit motionless for hours when people come to worship her, not expressing any kind of emotions. Thus, a Kumari Goddess should have calmness. With calm, she is expected to be humble and gentle. Kumari Goddesses must have a beautiful face and body too. During the selection process, the child’s body is inspected by the temple priest’s wife if she has any kind of scar in her body and if she stills has her baby teeth. A Kumari should be pure in every way.

The mental impact that these traditions have on these young Kumari Goddesses stays for their whole lifelong period. They do not have a normal childhood like every other kid of their age. For some of them, it appears to be like a trauma. After their role as a Kumari comes to an end, they now have to figure out how to adjust to a normal life. It becomes difficult for them as they have to learn making friends, socialising, going to school for the first time at such a late age. Human Rights Activists have been trying to remove Kumari Goddess’s practice for a long time because they are aware that it may harm young girls’ minds. However, they are declined.

With an interview with an old 60 years old former Kumari Goddess, Nani Maiya Shakya she said “I was chosen to be a Kumari when I was four and stayed as one for eight years. In the early days when I was really young, I did miss them (her parents and family), but later, no. When my parents came for a visit, they would worship me, stay for a while and then leave. The morning you were worshipped as a Goddess, and the next day it is nothing once you hit the puberty. “All the other former Kumari rarely have a get-together, but they all believe in having a special connection. They only have good things to say about their roles as Kumari Goddess and have not complained. They want this tradition to be preserved.

Fact about the Nepalese, Kumari Goddess: