Maltreatment Of The Women Folk: Is this Where our Modern Culture and Society is Heading Towards? 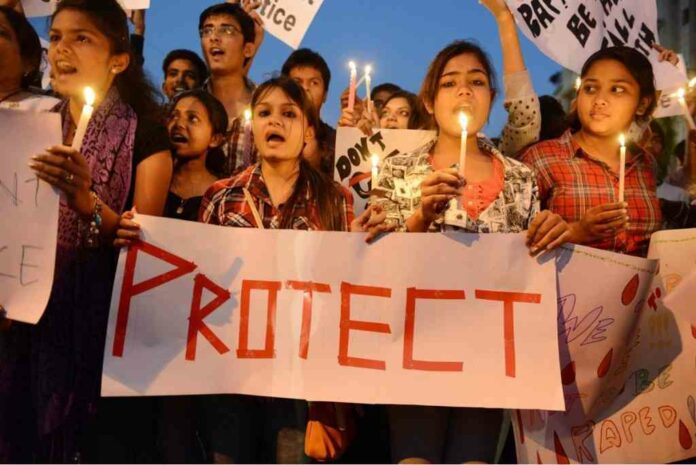 Oh! short skirts and midriff tops, women with such attire are stamped as ready to participate in the extant mindset of our commonality of taking the women folk as for granted and vulnerable . Some societal stereotypes seem to be unbreakable and this one tops such lists. The word ‘taken for granted’ in itself is disturbingly self descriptive, but when the ‘humankind’ joins it, it is an alarming reason to worry as of where we are heading as to being ‘Modern’.

Right from the womb a woman has to face all kinds of harassment in the name of societal traditions and rituals. Her strength has been and is being tested day after day in terms of the torture she can go through and why only talk of tortures, when she has to make scheduled sacrifices and serve without a word in the name of ‘duty’, till date, and further is expected to have neither of complains or demands (which is far sighted). People have forsaken that clothing sense determines the character of a woman, that whenever a woman wears a short dress it gives the passerby license to misbehave. Now, speaking of our very dear society, which calls women leading a life of dignity according to their own norms,’tedious-star’, why does it keep mum when a well dressed one (according to its norm) is molested and ripped off a midst it.

If attire was the only factor, then can anyone justify as to why little ‘Asifa’ and many more like her barely eight years of age has been gangraped. The thing is, its not in her clothes neither is it in her face, anomaly is inside us and our narrow mindedness. We shout telling men to learn to respect women, but have we ever thought that a society which does not know to treat her equally at the first place, how come we can expect that it will respect her overnight. And why only the society, each of us need to change individually and accept both, the way they are without trying to prove each one’s superiority over the other. It is to be realised that we need to treat both equally since nothing is different apart from the sexuality and the intuitions which come along with it, which has been decided by the universe for a purpose and we are not yet ready to question it.

Moreover, talking of the excuses, there is an answer to every excuse whether in the name of religion or revenge given behind every woman raped and molested. According to Swami Vivekananda “Religion is the manifestation of divinity already present in mankind” so one might question that, is this the divinity the great monk spoke of as in case of eight years old ‘Asifa’ or was it the same way of offering service to the almighty as stated by Swamiji when he said “to serve creatures, is to serve God” when ‘Nirbhaya’ and thousands like her, whose cries now forever remain buried under deep silence after the inhuman tortures by the devils and yet justice seem to peek from nowhere.

Now, leaving behind all such bigger issues there are  plenty of general, daily instances which are enough to portray their current condition. On the go with eve-teasing, where maybe no such girl exists who may not have faced it once in their lifetime and society found it rather easier to ignore than to protest, leaving protecting her at bay. Nextly, stands Body shamming which apart from physical terms has emotional significance as well and has taken a form of an epidemic blast where we have been made to believe that slim and a fair complexion is beautiful whereas the other half, commonality hardly cares off. Another major issue is drug abuse which has its roots even deeper in the population.

Yet another one, being, gender biased discrimination. How can one forget that off course! Till date at each and every field of the professional world women are subjected to objection and questionnaire​. Cause according to the society she is bound to have the sense to give a Roti it’s perfect shape, but she cannot run her own restaurant. The society is filled of hypocrites. At the political ground as well, they shout for equal rights, respect and empowerment. It even promises to give them right to education and most importantly the right to be born and live. Now this ‘living’, brings up another issue, even in the so called well educated part of the society, that is, female foeticide. Though, banished by law, the procedures behind these sorts of foeticides like amniocentesis, tends to grasp a major portion of society under it’s evil hug till date.

So, unless the humankind becomes consciously​ aware, no law can prevent it from causing a havoc. Majority of our kind has forgotten the contribution of it’s women folk towards the development of the society and the nation as a whole and for it’s well being. It tags it’s female folk ‘weak’ when they are even becoming fighter pilots today, and this list of ill treatment goes on and on and on…

So, humanity its high time to initiate your realisation of being ‘human’, dear nation its time for you too to revise that we symbolise motherhood and women — they have to realise their potential, that they are not just weak, meek and fragile delicacies. No great change has come about without turmoil, so, they are the ones who have to have train themselves to answer back the society, that too with a thrust, to fight back the prejudices which have been set against them. People have to change for this devastating scenario to change, yes its difficult but not impossible, cause rules and regulations of a country, its administrative procedures can be strictly implemented only when its citizens are sincere, so people have to change. Because if we don’t then the time is not very far when this whole civilisation will be at the verge of a recreation. Since the universe has never had mercy on factors which tried to disrupt its equilibrium, as after all men and women  are the two eyes of a creature, so if one is stressed and destroyed how far can it continue with just one?