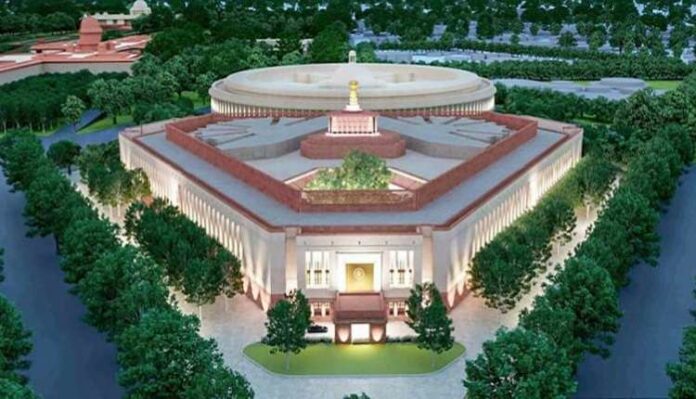 Everyone is familiar with the parliament house situated in the heart of India. This is basically the house where lower and higher houses, that is, Rajya Sabha and Lok Sabha, are situated. This is where the country’s fate is decided. This building has been here since the ’20s of the 20th century.

The Central Vista is an initiative of the Modi Government as a re-establishment project. Everything in this area will be re-developed. The main building here will be serving as the new parliamentary house for this country. Also, all the other infrastructure like PMO, North block, South block, basically everything in that area is going under redevelopment.

Now, of course, a project this vast will cost a fortune to be built.

But the expenditure can be justified if it is being done on a sensible asset.

Now there have been loads of questions regarding what is the Central Vista project and why India and its citizens need this.

First and foremost, let’s start with what is the issue with the old parliament house.

The Parliament House has been here for roughly 100 years now. It was constructed by the British and then was called the Viceroy’s House. Since it has been here for a century, it will naturally face some issues. In the British period, safety measures were not taken into account much. There are no such arrangements in the house in case a fire breaks out. Imagine the place where all the important ministers sit and work for the nation does not consist of a certified fire control system. Even the pathways to get away in case of fire are not clear. Most of them are obstructed. So only people from some particular section have the luxury to clear out. In such a place, escaping from fire should not be a luxury. This is just one of the safety issues faced around here.

Even the structure of the building has become weak and vulnerable. There was an incident when an enormous piece of the roof fell into the room. Fortunately, there were no ministers present at the moment. But these incidents make the staff of the house worrisome.

There are limited rooms and seats present in the house. When it was designed, the number of ministers was very much less than today’s count. And the British kept in mind that they could need more seats and rooms, so they constructed some extras according to future needs. But those are not enough today. The government has to add more seats and construct some rooms every now and then in order to give space to everyone. Even the Vigyan Bhawan, the conference room, does not have enough space to involve every entitled member of the house. Taking the covid-19 issue into account, there is no space for every member to sit. So when we think about social distancing, most of the members can not be working on the same day.

We simply can not expect a hundred-year-old building to be equipped with technologies that compete for today. But the basic things are also falling apart. The mics of speakers sometimes stop responding randomly. The wires of the building are decaying. There is no digital technology available. Even the water lines have been compromised. The sewage system is not functioning properly.

All these issues have been faced by the house for years. Now people might wonder why isn’t it just maintained from time to time. Why build a completely new building instead of simply renovating the existing one.

Well, that obvious solution has been implemented for decades now. But it is only a temporary way to handle the situation. The condition has been worsened by constant destruction and construction of sections of the building. 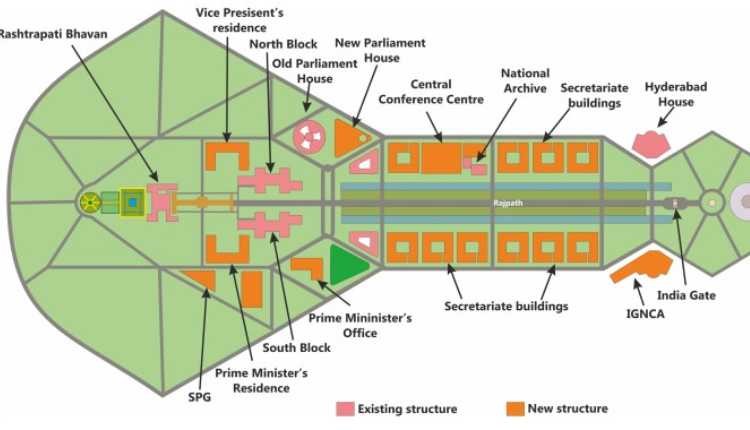 Now that we have cleared why this project is needed, let’s discuss what exactly the project is. The objective here will be to revamp the three-kilometer road known as the Rajpath, build a common secretariat, a new office for the Vice President of India at the north blocks, advanced office for the Prime Minister of India near the south blocks, and of course the Trikona Parliament House. This is because it’s not just the parliament whose conditions are bad.

There were bids by different companies for this massive work. The HCP Design, Planning, and Management Private Limited, which is led by Bimal Patel, has been given the Central Vista project. This company is known for its marvelous designs, like Sabarmati Riverfront situated in Gujarat, Mumbai Port Complex, and many more.

Tata Projects is the one selected for the construction of the Triangular Parliament House. This building will be 4 stories and around sixty-five thousand square feet vast in size. It is planned to finish this work before Next year’s month of March.

Features of the Central Vista Project

The New House will not just be safe from fire hazards but also from the earthquake. The design will be able to handle the pressure and shakes. It was brought to attention that the capital city has been facing earthquake issues in bulk for the past few years. This building will ensure the safety of the hundreds of people working here, all the media personnel, and the ministers during the calamity.

We talked a bit about the old house not having enough space for everyone to be present. This will be the last issue to be faced in the New House. The capacity of the Upper House will be 888 instead of 552. For the Lower House, the seat count will be increased by 139, making it a total of 384. These rooms will be thrice and twice the size respectively as compared to the old ones.

There will be provisions made if needed to increase the seats in the future. So there will not be any kind of problems in this section.

Old House did not even have all the mics and speakers working. So talking about having good quality acoustics and visual facilities was ridiculous then. But these will be present here. An audio/visual aid will help a lot in explaining the bills. In addition to this, it will make it interesting to watch for the citizens who get bored and do not listen to the House meetings. The seats will be made comfortable and advanced for the ministers. A multi-media display will be provided in front of every member of the House. This might increase the attendance of the ministers in the House now. Arrangements in the furniture will be made for shrewd presentations, and biometrics for simplicity of casting a ballot with an instinctive interface and graphs will be presented. Advanced language translation and recording foundation to deliver continuous metadata will also be featured in the project. Programmable amplifiers that can be commanded by the speaker will also be equipped here.

The then Viceroy’s House was designed according to the British cultures and designs. It still carries the essence of England in it. The New House will consist of designs that will portray the rich and diverse Indian culture related to every kind of religion and mythologies and beliefs too.

Peacock, Lotus, Banyan Tree are the national bird, flowers, and trees of India. These will be the theme of the Upper House, Lower House, and the Lounge in the center, respectively. Also, our great Indian constitution will be displayed in huge size on the wall. Even the matts and pathways will be designed in Indian traditional ways. The Three Lions will also be displayed on the top of the House. Texts from manuscripts in Sanskrit will be engraved on the walls of some rooms too. The roof will have fresco designs as well.

Along with the offices and room for committees, secretariats, facility to dine, there will be museums and archives present. This will also be presenting our culture and history. This section will be open for the citizens to visit. The Constitution will also be displayed here in large size for people to come and read. Most of the people have not read their constitution; this may develop some interest.

The new Parliament building will utilize green development materials as an eco-accommodating structure. Gadgets will be introduced, which will save 30% of the power. There will likewise be plans for water gathering and sun-based energy generators.

The Triangular House will likewise have extraordinary offices for the media personnel. An aggregate of 530 seats will be orchestrated for the journalists. The two houses will have displays for the overall population to observe parliamentary procedures. There will be an unmistakable perspective on the house from each seat. This has never happened before in this country. Also, it will be seen that no kind of disturbance is caused by the public during the proceedings.

Let’s divide the Vista into two parts to understand. Starting from the India Gate, on 1 side of the Rajpath, you will find IGNCA, Secretariat buildings, the PMO, old South block, home of the Prime Minister, and finally SPG quarters. On the other side of the road, there will be the National archives and the Conference room center followed by the New and the Old Parliament House with old North block and new Vice President’s home next to them and finally the Rashtrapati Bhawan.

The focal patio will incorporate an outdoor gathering space for MPs and, furthermore, a bistro. MPs’ loads will have VVIP access at underground levels, accordingly opening up ground floor access for government authorities and individuals from people in general. There will likewise be stately doorways for the President, the Prime Minister, the Speakers of the two Houses, and MPs.

Few citizens find it bizarre that this construction is being done during the Covid-19 pandemic. The capital involved here would be somewhere between 15 to 20K Crore Indian Rupees. Critics suggest that this money should rather be used in the health sector.

So let’s clear out the problem

First and foremost, every sector is appointed with a percent of GDP. If the finance ministry diverts the budget of every other sector towards heath, it will be disastrous for the Indian economy. In this epidemic, India has already lost a lot of capital, and its economy has been down for a while. Let’s try to understand what will happen once the construction begins. It is estimated that almost 2K people will be involved directly and around 9K indirectly. When they work, they will be paid wages. Once they receive the money, they will buy goods—the demand increases. So the supply chain is balanced, hence growing the economy.

Leave economics; let’s apply some maths. In the current Parliament House, India pays more than 1K Crore INR to pay rents and for sectarian rooms. Plus more for the maintenance of the falling apart structure of the building. So the money that would have been paid for 15 to 20 years, that is used to make a better House with much more capabilities. The New House will be paying a lot less for the power and yet be using advanced ways.

Atmanirbharta, this word is being heard a lot nowadays. This is because India is trying to become self-reliant. The Old Parliament is British-made and is filled with their culture and history. Only the name was changed; the rest was left as it is. It’s high time that the Indian Parliament House should consist of Indian culture and not one of its then oppressors. This will show our strength, and the building will help you connect with the actual Bharat by being a symbol.