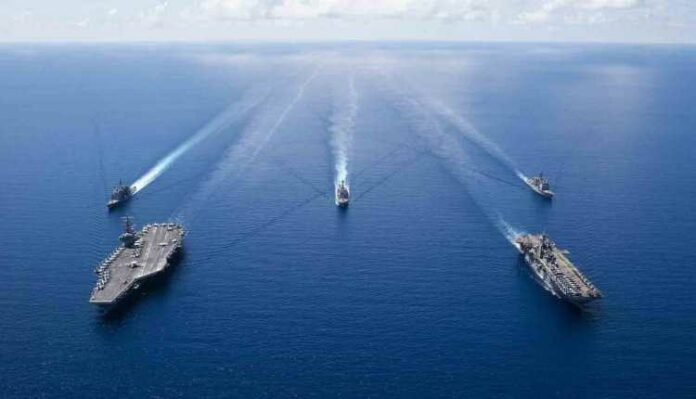 The South China Sea dispute is the dispute over the claims of the South China Sea among various States like China, Philippines, Vietnam, Brunei, Indonesia and Malaysia. The claim is mainly over the islands, banks, reefs and other features of the South China Sea. The States are seeking to acquire rights over the fishing stock, exploration and exploitation of crude oil and natural gas available in the various parts of the Sea. It is also the main point of trade and of immense importance for shipping lanes for it accounts for US$3.37 trillion worth of global trade.

The South China Sea was under no one’s control until the 1930s. Historical accounts show that France had control over some of the features in the territory during the 1930s. Japan was one of the first to assert a claim over the islands in 1939 when it occupied the Paracel and Spratly Islands in the territory. During World War II, Japan carried out various military activities in the islands. However, after the war, in 1951, Japan gave up its control in the South China Sea by signing the Treaty of San Francisco. However, the treaty did not specify the new status of the islands. Soon after, China claimed most of the territory of the South China Sea by using nine-dash lines to indicate the area under its control. It claimed that it had a history of such rights as there was no claim of sovereignty over the territory before the 1930s. Similar claims were also made by Philippines, Vietnam, Brunei, Indonesia and Malaysia. Thus, conflicts between such countries have emerged, with them taking claim over certain parts of the islands and initiation of military activities in the territory.

China has taken up most of the islands in the region since 2013. While China controls all the features in the Paracel, Vietnam controls the around 29 number of features in the Spratlys. Similarly, with respect to the Spratlys, the Philippines has control over about eight features, followed by Malaysia, which has control over just five. However, the balance of power in the Spratlys had greatly shifted since 2013, when China started its island-building activities in the region. It has been reported by the US government that since 2014, China has taken up more than 3000 acres of land in the South China Sea. These actions have led to a lot of ridicule, and following the same, the United States and other states like France and UK have taken up Freedom of Navigation Operations (FONOP) in the area since 2015.

China claims that its work on the islands has been done for military and civil needs. However, the US and its allies have claimed that the acts of China are unjust, and their main concern is over how China is spreading and militarising the islands too fast. The Freedom of Navigation Operations (FONOP) have been taken up by the US and other Countries for keeping a close eye on China’s operations. The US has also joined with the Philippines to conduct joint military exercises in the South China Sea. However, China has accused the US of causing tensions in the area by its interruption.

In 2013, the Philippines initiated an arbitration proceeding in the International Tribunal in Hague (the case of China v. Philippines (PCA Case No. 2013-19)) against China and its actions in the South China Sea, including its claim of the nine-dash line. However, China did not take part in the proceedings. In 2016, the tribunal passed a rule in favour of the Philippines. It ruled against the claims of China over the territory of the South China Sea and stated that China had no historical background to back up its claim over the territory based on the nine-dash line map. The claim was affected after Japan renounced its claims to the Islands in the Treaty of San Francisco and the Treaty of Peace with the Republic of China (Taiwan)in 1951. However, it is clear that these did not indicate the status of the territory or the successor states.

Subsequently, China refused to recognise the authority of the tribunal and wanted to solve the matter through bilateral negotiations with other claimants. However, the other States recognised the ruling of the tribunal.

In the rule, it was held the South China Sea to be a semi-enclosed sea, that is, a shared maritime space, as under the Law of the Sea Convention, which meant that the coastal states are expected to cooperate on every issue, from conservation to commercial exploitation. Under the convention of the Law of the Sea, the States have a right to exploit the resources of the Sea and seabed of the exclusive economic zone which extends to 200 nautical miles as measured from the land territories. In case of overlap of this zone with other countries, the claimants have to negotiate with each other. However, this negotiation or dispute is yet to be resolved in the case of the South China Sea. The main challenge faced right now is with respect to the ownership of the Paracel and Spratly islands. While China is using evidence from ancient times, the other States deny the validity of such evidence or are using similar evidence like Vietnam, which has similar credible evidence from before and during World War II.

On 20 July 2011, an agreement was signed by Brunei, China, Malaysia, Philippines, Taiwan and Vietnam for setting up of certain preliminary guidelines upon the implementation of the Declaration of Conduct of Parties in the South China Sea. The code of conduct mainly focuses on “marine environmental protection, scientific research, the safety of navigation and communication, search and rescue and combating transnational crime”. However, the issues on the reserves and drilling of oil and natural gas remain unaddressed. It is yet to be completed and implemented.