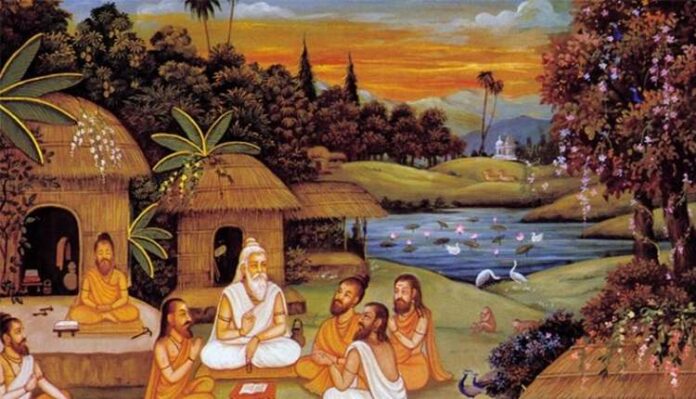 Before British rule, the ancient Indian education system was dominated by pristine ‘Gurukuls‘. These were sacred spaces of self-discovery, spirituality and holistic development situated in isolation wherein the much revered ‘Guru‘ or teacher employed the art of education to teach his ‘Shishyas’ or students the art of life.

Unfortunately, in the blink of a moment, the streams of knowledge and inspiration flowing in these schools dried out. The ever-burgeoning tree of wisdom was cut down by the English, who set up their own ‘modern’ education system. Such modernisation transformed our ancient schools into exam factories producing clerks for the Majesty’s service.

Even more unfortunate is that the same system has been favoured until now instead of putting efforts into the formulation of a fresh one.

The ‘Gurukul‘ system was the spiritual education system prevalent in ancient India. It was started in the 3rd CE BC and was South Asia’s primary education system. All the students, irrespective of their social standing, were supposed to reside together in the Gurukul until completing their education.

Throughout a child’s learning stage, known as the ‘Brahmacharya‘ phase, the Guru scrupulously ingrained significant lessons of life in him; this was done by engaging him in routine household chores as directing him to beg alms in the nearby villages, among other tasks. Also, they were taught the Vedas, the religious texts of the Sanatan Dharma, as well as grammar, astronomy, Tarka Shastra or logic and reasoning, arithmetic, performing arts, ethics and much more. High standards of learning outcomes were ensured through intricate and insightful teaching and learning methods. Such outcomes were evident in the bunch of self-aware, intellectual and dedicated scholars.

Degradation by the British:

Sadly, this well-thought-out model designed by some of the greatest geniuses of time was completely disregarded and replaced by so-called ‘modern’ teaching methods. The Britishers introduced a plethora of policies and laws, which lead to the proliferation of the modern system of education and the introduction of formal schools which focused primarily on teaching the English Language while

neglecting the vernacular ones. Rote-learning and memorisation became a pervasive method of teaching. The core objective of the Education Policy of the British was to create a class of Indians who would be “Indian in blood and colour, but English in taste” and would act as interpreters between the Government and the masses, i.e., a class of subordinates who would be subservient to the British. Schools became the hubs of indoctrination. Old lessons were forgotten while new, westernised ones were taught to the children. Who knew then that the community would be significantly harmed by such modernisation of thought and behaviour. Unfortunately, instead of persevering to revive the legacies of our education system, we have been continuing with the legacy of the British- glamorising the English Language while condescending to people who blatantly question instead of being obedient. 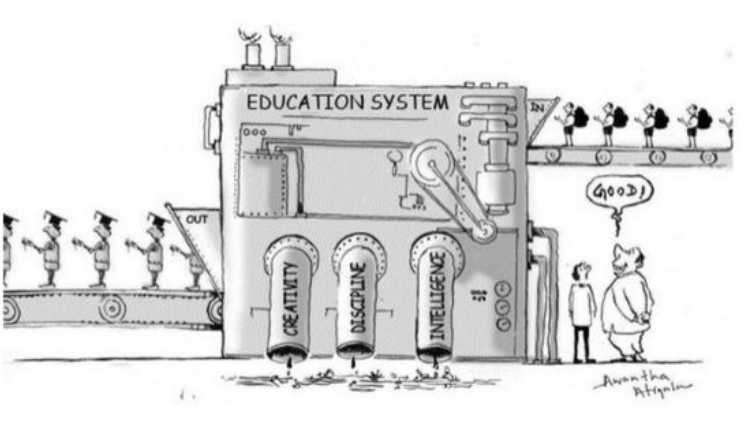 The present-day antiquated Indian education system, right since Independence, is demanding a complete reconstruction, but all it has got since then is a superficial refabrication. The development in education took place at a noticeable pace but was not in a successful correlation with the wholesome development.

The conspicuous evolution of education at the time of Independence was only momentary. Soon, the wheel of teaching and learning devolved into a rusted sphere making screeching sounds before coming to an absolute halt.

These screeching sounds till now distress those who cannot find the practical application of what they learn in theory, those who fail to identify their unique abilities as well as those who put in their heart and soul to fare well in this system, only to find themselves feeling disillusioned and disconnected at the end of the day.

The system has never changed at the grass-root level. Instead, owing to the lack of the sunshine of attention on the tree of education, it continues to be nothing more than a withered erection. In reality, teaching escapes the domains of school, and so does learning and unlearning. Hence, the main aim of academia must be to provide a conducive environment where teachers become true ‘intellectual midwives’, giving birth to ideas that spark the thinking capacities of the students.

As the world beholds the biggest and the most dramatic shift in all sectors during these unprecedented times, it is possible that with unusual enthusiasm, we can create an unreal disruption in our education system such that it no longer comprises of institutions endorsing holistic, cosmetic development but genuinely promotes all-encompassing progress of the child.

The National Education Policy 2020 carpet bombs a variety of academic solutions to the present educational loopholes. All that everyone awaits is the ground-level progress that is made over the years.

Our mission should be to revive the real essence of education so that the coming generations would joyously absorb its fragrance and stay grateful to those spirited creatures who made it possible.