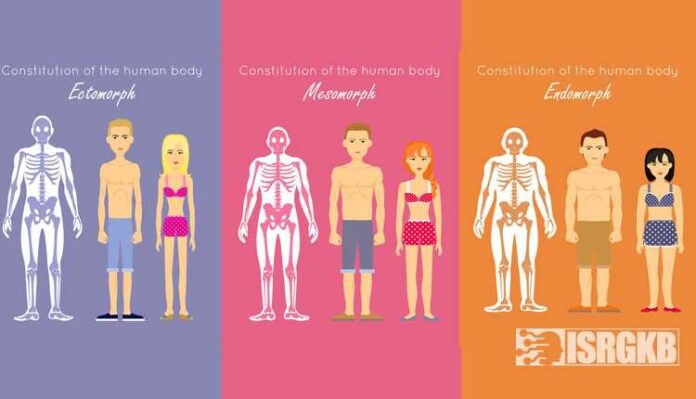 The FIRST IMPRESSION MATTERS THE MOST is the usual statement everyone has heard. This statement implies that an individual first impression in terms of their appearance, body type, expressions, clothing, dressing, and carrying sense can leave a long-lasting impact on the other person.

BEAUTY LIES WITHIN THE PERSON is another very prominent statement, implies that the appearance or body type of an individual does not deem their beauty. SO, which of the affirmation is correct? Do humans judge a personality by focusing on body type, appearance, or dressing sense? LET US TAKE A LOOK ON IT.

In the 1940s, William Herbert Sheldon, a prominent American Psychologist, come with a theory named William Sheldon Theory. This theory focus on the body type of people and how these body typologies with associated temperament are linked and can direct to a personality. He gave a premise to his theory by laying out SOMATOTYPES. These are the three categories of different body topologies that were later classified. He states that fat and chubby people are outgoing and loving, muscular body-typed people are aggressive, a slim person with fragile bones are quiet or cautious. He then later classified his statements about the body types into three different categories named somatotypes, mentioned above. He also gave similar body type personality traits that become a premise for judging personality or judging traits from their body types and built.

Ectomorphs are the complete opposite of mesomorphs and endomorphs on we will look at later on. Ectomorphs have thin and fine-boned, long, lean, have less body fat and muscles. They have a delicate frame are hard grainers that mean they find difficulty in building fat and muscles. Models, basketball players can lie under this category. They have narrow shoulders, less fat on every part of their body, narrow chest, and always remain skinny. They can have a fast metabolism and, their body can look like a fast marathon runner. Besides these physiological characteristics of the ectomorph body type, one tends to know some ectomorph personality traits with this body type. Through that one, one can also understand the other personality in varied situations.

Ectomorphs tend a cerebrotonic personality. These cerebrotonic personalities include being slim and lean even they eat so much, and they cannot put on weight that can make them self-conscious. They are more private, cautious, reserved, quiet, introverted, sensitive, and inhibited. They are totally in contrast to endomorphs as they are socially anxious, artistic, and intense, emotionally restrained, and can be very thoughtful of various things. These types of body types; people have personality traits of keeping to them and are afraid of being with others to branch out. According to researches, females are the ones who experience mostly this body type and personality traits. Female body shape and personality become very slim, thin, reserved, and socially anxious.

Endomorphs are the most relaxed and loved category by other people. Endomorphs are contrasted from ectomorphs as they are associated with a round, soft body. Mainly, the hips are wide, rounded, and narrow shoulders that give them a pear-shape. They have a lot of fat on their bodies, especially on their shoulders, thighs, and hips. They have a stocky build and a wider body than the ectomorphs. They have more muscles and a large amount of fat in the lower part of their body, legs, thighs, and hips. They may have the best strength from all the body types but have a low metabolism than the endomorphs. Body parts, as ankles and remain quite slim as all the fat moves to other areas of the body such as thighs, shoulders, upper arms, etc. They tend to gain weight without much effort. For example, football linemen can put on weight without effort.

Along with this body type, personality traits occur too, including being social, outgoing, thrill-seeking, gregarious, happy, relaxed, fun-loving, love for food, comfortable, tolerant, and humoured. They focus mostly on affection, love, and food. They are even-tempered and became anxious very rarely. They tend viscerotonic personality that consists of being relaxed, lovable, comfortable, and extraverted.

Mesomorphs lies somewhere between these two body types as endomorphs and ectomorphs body type and associated personality traits. Mesomorphs have an attractive body that is considered desirable. They are not very thin or fat and are somewhere between these two body typologies. They are athletic, solid built, and strong muscles. They are not underweight or overweight, they are totally on their normalized weight, and they can eat whatever they want, put or lose weight without effort depending upon the situation or the effort they had put in. They can be lean and muscular at the same time, have a normalized metabolism rate. For example, under this category, natural athletic can come who are build with well-defined muscles. They have a large head, broad shoulders, and a tapered waist with a muscular body with string thighs, arms, and forearms, and have very little body fat. They have a fragile body built, musculature.

Along with these body type physiological traits, mesomorphs have some associated body personality traits that include adventurous, thrill-seeking, gregarious, seeking dangerous adventures, courageous due to their long musculature built. They are not afraid to break out and, they can take up new things without being hesitant, are brave, and are assertive, have a strong sense of identity. They tend to have a somatotonic personality that includes being active, loving, dynamic, confident, and aggressive. They are competitive, have the zeal to try out new things, and even win in competitions. They have a desire to dominate and are willing to take a risk for love.

Below are some Real-Life examples, where one associate body type with Personality, Judge and behave with the Person accordingly-

Linking the body typology with personality can be advantageous many times, and it can be real while noted by many pieces of research. Sometimes it can be wrong that later can head up to discrimination and stereotypical practices.

Different researches and experiments are done by many psychologists and researchers who state that people in the middle of situations judge and understand others based on their body type and associated personality traits and act while being with them. But, this can be stereotypical for endomorphs (who are round, soft, and have wider hips, maybe obese) are tend towards viscerotonic personality where the personality traits of a person include relaxation, nurture, care. But the type of association can be very stereotypical as negative qualities like carelessness unpurposeful gets attached to ectomorphs. Some researchers also suggest that obese people do not get enough income like the other two categories of mesomorph and endomorph body types. Being non-athletic and away from sports activities are seen as some characteristics of ectomorphs. These assumptions can lead to discriminatory practices where children who are obese are not accepted in some sports activities and do not take part in these sports due to the pressure and stereotypes on them by society.

Another stereotype about mesomorphs (who have strong muscles and a rigid body built) is that there is a link to criminal activities, behaviour, and aggression because they are strong enough to fight people and indulge in delinquent acts.   Children who are musculature in their body built are aggressive with others, even if they are not real, and have contrasting personalities. According to others, the stereotype can lead to discriminatory practices like a punishment from teachers and parents, comparing them with others, and labelling them. Another discriminatory practice can be exhibit from the same age group children who tend to exclude these types of people from their social groups because of the assumption of being aggressive and harmful.

Another stereotype related to these body types includes discriminatory practices as putting more pressure on studying, ambitions, and jobs on endomorphs. There is an assumption that these people are more brainy and artistic, where others may have different strengths besides these intellectual traits. But these expectations by society can lead to discriminatory practices by teachers and parents that put more pressure on the child and expecting more from them. These types of discriminatory practices can even lead to anxiety, and in some chances, anxiety, and panic disorders. There is an assumption that heavier bodies are more careless, less determined that heads up to hindrance of the opportunities they come across, and there is a use of these body types while indulging in mate selection and can be different for both males and females.

There are other stereotypes and discriminatory practices associated with these body types but are more specific to gender. For example, females with endomorph body types are thought of as not attractive and worthy enough. They are considered in the last while indulging in mate selection as they are considered obese, lazy, careless, and less determined. Only those females are lovable by others who have ectomorphic body types. On the other hand, males with mesomorph body type are much more liked by others as they have a musculature body built that linked them with the predetermined gender role as being more masculine, strong. But, stereotypes lead to discriminatory practices as women who are strong than men are considered against their family and society and even considered not fit for marriage (These types of girls are termed, tomboys). Males who are not much string and have an ectomorph or endomorph bodies built are considered feminine and even termed as by different names from their peers as we have seen experiences of the LGBTQ+ community.