List of Extinct Animals You Do Not Want Science to Revive 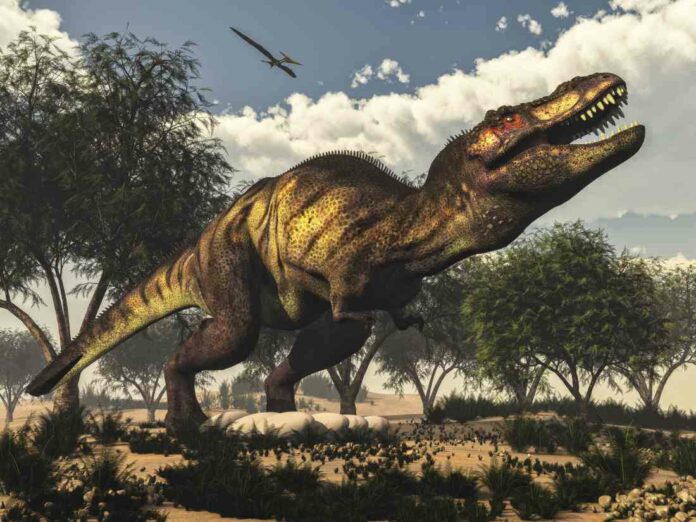 According to science, right now Earth is in the midst the sixth mass extinction. According to science, there might just be a way to de-extinct some species. Which really just means that we might be able to resurrect certain species that we have lost. Say Passenger Pigeon. New advances such as CRISPR-Cas9 revolution has researchers thinking if time bring back the extinct species has finally arrived. If so which one is good and which ones are a big NO!

The two animals which are being considered for de-extinction are Wooly Mammoth and Passenger Pigeon. The last mammoth went extinct approximately 4000 years ago while the Passenger Pigeons vanished about 1900 years ago. The reason to bring back animal is more related to ecological restoration and function. Every animal in the environment plays a role. Even mosquitoes. Bringing back the Wooly Mammoth would help convert Arctic Tundra back to grasslands or so George Church of Harvard University says.

When large herbivores disappeared, the ecosystem transformed into today’s mossy tundra and taiga which has now begin to melt and release Carbon dioxide. Reviving Wooly Mammoth would slow down the climate change. Passenger Pigeon played a role in shaping the forest they lived in. They are about 5 billion in number, their dropping flammable to the point they destroyed trees and increased the chances of forest fire. After their extinction white oaks lost their primary mode of seed dispersal and forest no longer remained the same.

But these are the animals which need to be de-extinct-ed. What about those who should not be revived? 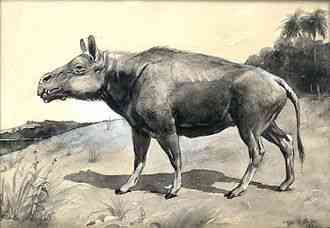 It is an extinct genus of Entelodont artiodactyl endemic to Eurasia. Fossils of these species are found in Paleogene strata ranging in age from 37.2-33.9 million years ago until Rupelian epoch of early Oligocene (33.9-28.4 million years ago). They are primarily known from Europe although one specimen was found as far as Northern China. Entelodon had complete eutherian dentition (3 incisors, 1 canine, 3 premolars and 3 molars per quadrant). It had two toes on each foot. And its legs were built for fast running. Its long, wide head was supported by a robust, short neck, and its cheekbones were greatly enlarged and protruded noticeably from the sides of the head. It was more closely related to hippos and whales than pigs, its skull is more like a pig. It is presumed to have been an omnivore. It was around 1.35 meters tall at the shoulders with 65-centimeter skull. Entelodont magnus populated a broad swath of Europe with remains found in Spain, Germany, France, Romania and Caucasus. Extensive remains of Entelodon deguilhemi were uncovered in Vayres-sur-Essonne in France. The Chinese Entelodon dirus is known from a single tooth discovered in Nei Mongol. 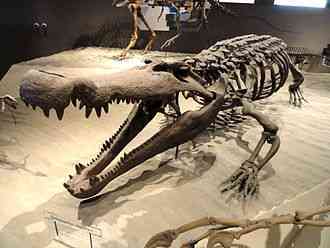 It is an extinct genus related to the alligator that lived 80 to 73 million years ago during the late Cretaceous period. Although Deinosuchus was far larger than the modern crocodile or alligator with the largest adult measuring up to 10.6 m in length, its overall appearance was fairly similar to modern alligator and crocodile. It had large, robust teeth built for crushing and the back was covered with thick hemispherical osteoderms. They may live for up to 50 years, growing at a rate similar to modern crocodiles but maintaining their growth over a long period of time. They were capable of killing and eating large dinosaurs and may have also fed upon sea turtles, fish and other aquatic and terrestrial preys. The distribution of Deinosuchus indicates their preference for estuarine environment. In Aguja formation of Texas, these predators inhabited brackish waters bays. It is not clear if they ventured into ocean like modern saltwater crocodiles. They used their robust, flat teeth near the back to crush turtle shells. They are believed to have employed similar tactics to those of modern crocodiles, ambushing dinosaurs at water’s edge and then submerging them until drowned. 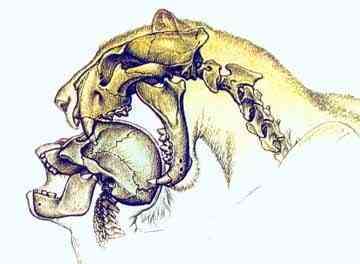 It is a genus of extinct saber-toothed cats belonging to tribe Metailurini. They were widespread in Europe, Asia, Africa and North America at least 5 million years to ago about 1.2 million years ago. That is from Early Pliocene to Early Pleistocene. In size they were similar to Leopard and lion, with most about the size of a Jaguar. They were medium sized but powerful cats with a pair of prominent saber teeth. The front limbs were particularly robust compared to modern cats. The canine teeth of theirs are longer and more flattened than those of modern cats but less than those of saber toothed cat. Hence, the designation of Dinofelis as false saber tooth cats. While the lower canines are robust, the cheek teeth are not as robust as those of lions and other modern big cats. The possibility of Dinofelis being a primate’s predator was explored by Bruce Chatwin in The Songlines: “Could it be, one is tempted to ask, that Dinofelis was our beast? A beast set aside from all other Avataars of Hell? The arch enemy who stalked, stealthily and cunningly, wherever we went? But whom in the end, we go better of?” 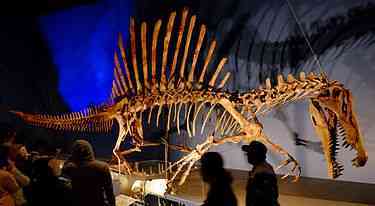 It is a genus of theropod dinosaur that lived in North Africa during the upper Albian to upper Turonian stages of the Cretaceous period about 112 to 93.5 million years ago. It was among the largest of all carnivorous dinosaurs, larger than T-rex, Giganotosaurus and Carcharodontosaurus. Estimates suggest it was between 12.6 to 18 meters in length and 7 to 20.9 tonnes in weight. They are known to have eaten fish; most scientists believe that it hunted both terrestrial and aquatic prey. Evidence suggest that it lived both on land and water. The distinctive spines on Spinosaurus were long extensions of the vertebrae growing to at least 1.65 meters. They likely had some skin connecting them forming a sail like structure or the spines could have been cover in fat to form a hump. Spinosaurus were like to have been a generalized and opportunistic predator like grizzly bears, being biased towards fishes but at the same time scavenged and took many kids of small or medium sized prey. In Jurassic Park III it replaced T-rex as the antagonist. John R. Homer said, “If we base the ferocious factor on the length of the animal, there was nothing that every lived on this planet that could match this creature. Also my hypothesis is that