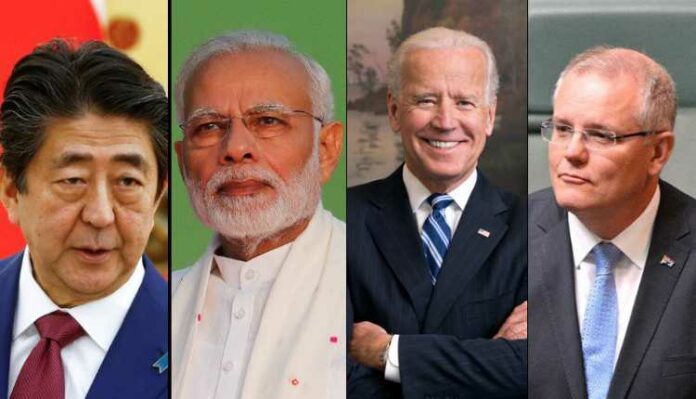 Foreign Ministers of India, US, Japan, and Australia meet at Tokyo, Japan. The Quadrilateral Security Dialogue, a meeting of Quad countries’ foreign ministers, was held on October 6 in Tokyo, Japan, to respond to China’s growing grandeur, and will focus on China’s imperialist policies.

The Quadrilateral Security Dialogue, a meeting of quad countries’ foreign ministers, was held on October 6 in Tokyo, Japan, to respond to China’s growing grandeur. External Affairs Minister of India S. Jaishankar is scheduled to attend the meeting. Ahead of the meeting, the Trump administration said the group’s goal was to protect the Indo-Pacific region from Chinese aggression. Quad countries’ list includes India, the USA, Japan, and Australia.

The decision was made because of the proximity of the then Australian Prime Minister Kevin Rudd to China. But two years later, at the insistence of Barack Obama, Australian Prime Minister Julia Gillard returned to QSD. During the ASEAN Summit in Manila two years ago, the four countries decided to resume quarterly talks under the QSD. So, at present, the situation is like Quad vs China!!

The priority of this group of four countries is to implement a free, open, inclusive, and rule-based system for development and peace in the Indo-Pacific region. Several QSD meetings have been held between the four countries. India is playing a key role in retaliating against China in the Indo-Pacific region. China’s growing dominance in the region is of particular concern to India. China also has differences and disputes with other countries in the region.

After trapping the whole world in the corona trap, China is moving relentlessly on its imperialist policy. China has been stockpiling large quantities of weapons in the South China Sea for some time. Just two days ago, China patrolled a US spy plane after firing ballistic missiles into the area. The sea that stretches from Southeast Asia to the western end of the Pacific Ocean is called the South China Sea. China has been claiming this maritime area for years.

China’s activities in this area are high-speed. China has built at least seven artificial islands here in the last few years. China has also deployed missiles on several islands. China claims to have a right not only to the South China Sea but also to its resources. In addition to oil and gas, thousands of species of fish are found in this marine area. It is estimated that about 55% of the world’s fishing industry is either shipped via the South China Sea or found here.

Just a few months ago, the US conducted a joint naval drill with India, Australia, and Japan as part of its strategy to encircle China. Four ships of the Indian Navy along with US supercarrier USS Nimitz took part in a two-day joint military exercise in the Andaman Bay. So the USS Ronald Reagan, the second US aircraft carrier, conducted a joint military exercise with Australia and Japan in the disputed South China Sea.
The U.S. is also opposing China’s growing movement in the South China Sea. The United States, along with Europe, Asia, and Australia, is working to secure the Indian Ocean from conflicting China. The US joint naval exercise is proof that India will be America’s most important ally in the Indo-Pacific region.

At the same time, Japan and Australia will have an important role to play, said US Secretary of Defense Mark T. Asper said US aircraft carriers had been deployed to protect the sovereignty of America’s friends and allies, and the United States wants to ensure that America’s allies are protected from China’s misconduct.

Seeing that India has been opposing China’s territorial policies for some time now, a picture has emerged in other Asian countries that only India is capable of challenging China. Because of this, countries like Vietnam, Indonesia, Singapore, and Australia are also looking at India as a strong ally to challenge China’s grandeur. The whole global community is impressed by India’s resolute response to China over the past few years.

Thus, India has been dominating the Indian Ocean, but for some time now, China has been trying to encircle India in the Indian Ocean. China is setting up military bases in India’s neighbouring countries in the name of port development.

By controlling the port of Hambantota in Sri Lanka, the port of Macau in the Maldives, the port of Chittagong in Bangladesh, and the port of Gwadar in Pakistan, China has come a long way in encircling India. It has also set up a military base in Djibouti, an African country opposite India in the Arabian Sea. China’s increasing movement in the Indo-Pacific region has also forced the Indian Navy to increase its accuracy.

The United States has also stepped in to curb China’s growing influence in the Indian Ocean and Pacific. He calls the region Indo-Pacific instead of Asia-Pacific, and China does not like to be called Indo-Pacific. Because of this name, India is emerging as an important country in this field.

In 2016, the US made India, its biggest strategic partner. Then in 2018, the US gave India NATO-equivalent status, which would allow India to buy arms and technology from the US. India now has access to highly sensitive military equipment from the United States. In fact, during the tenure of Prime Minister Narendra Modi, India’s global recognition and credibility have increased worldwide.

Over the last few years, India’s dominance has been steadily increasing, and India has emerged as a global power. Under the leadership of Prime Minister Modi, India has achieved several strategic successes. Quad India is also one such example!

Recently, a military deal was struck between India and Japan. The two countries serve each other under this agreement. I will be able to exchange military forces and weapons. This means that in case of war, India and Japan will provide mutual military assistance. India has already signed such agreements with the United States, France, South Korea, Singapore, and Australia. The developments in the Asia-Pacific region over the last few years have made India and Japan natural partners. China is the biggest factor in bringing the two countries on one platform.

Indeed, China’s growing grandeur in the Asian continent is a threat to both countries. China is increasing movement in the South China Sea, which is a threat to Southeast Asian countries, including Japan and Indonesia. So the way it is treading in the Indian Ocean is a warning to India.

The United States has previously said that the quad meeting will devise a strategy to take effective action in response to China’s moves in the South China Sea. We hope that the Quad vs China strategy will definitely end with good results and this would also become a great victory of Quad India!