Shoemakers: They make good shoes because they make nothing else 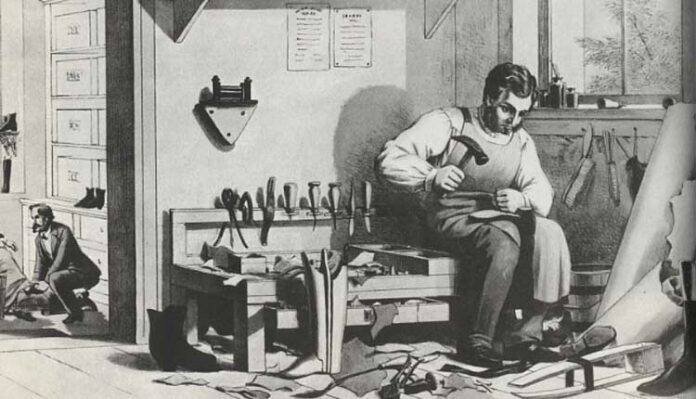 A new day, a fresh morning and as scheduled everybody got ready for their work. On the Linkin Street sharp at 9:00 am the cobblers were to set their equipment and were ready for their job. There were four cobblers who were the best of friends. All of them knew their job and were simply perfect in it. Hot or cold, humid or raining, sick or tired all of them were dedicated, hard working and punctual towards their work. Every morning they used to meet at the Linkin tea shop to have tea together.

They used to talk about how many customers they expect and sometimes share their sad or funny experiences and laugh with them. After 30 min all of them would go for their work together. Even after knowing that all of them did the same work at the same place still, there was no competition between them. They all worked happily together. Only one difference between the four cobblers was that they all worked for different purposes. The first cobbler worked for the sake of his son’s education.

He wanted his son to get a good education and comfortable life ahead. His hard work benefited his son. He started going to a private English medium school. The second cobbler worked for his family as he had 3 children. They all went to study in a government school. Moreover, the cobbler earned only because he wanted to fill their stomach. The third one worked for his mother’s ailment as she was in a serious stage and the fourth cobbler worked for his own living. He lived all alone and was able to save some amount of money.

Four of them were pretty much famous not only for their work, but also for their friendship. They had their four regular customers who would come sharp at 9:40 am get their shoes polished and gave the cobblers their money. Apart from these 4 customers, there were times when all of them didn’t earn and had to go being disappointed. And sometimes when they used to earn a good amount of money they used to take chocolates for the kids. All of them had that big stretched smile on their face.

One fine day one cobbler fell sick. He went to the government hospital, but didn’t get a clear answer. He went to the hospital daily for 15 days and at last got to know that he was suffering from cancer. After telling this to his friends, three other cobblers helped him by giving him all their savings. After spending all the savings he had collected he was still not able to get enough money for his operation. After some time he gave up and died. For the rest five days, the 3 cobblers didn’t come from their work.

Their customers used to come daily at that place wait for 2 minutes and then leave. After a couple of days, the gobblers came back for their work. When their customers came, they noticed that one of the gobblers was missing. The customer of the cobbler who died asked the other one about him and he said that due to his severe illness and lack of money he died.

The customer with immense sadness left from there without even getting his shoes polished. Next morning, that customer waited for his turn as there were only three cobblers now. Now, the customer had to wait for 5 minutes for his shoes to get polished. That moment he realized that every work has its own, worth and importance. The absence of the cobbler made him wait for his turn and also made him realize that he was dependent on him be it for a small or big work

This story of these cobblers simply gives us 3 different morals and life lessons about:

Even after knowing that all of them did the same work there was no competition between them. None of them had the feeling of earning more. And when one of the friends was in need the rest of them gave him all their savings just to save his life. At that moment their friend’s life was their first priority.

2. Save Money and It Will Save You

In today’s world money is more important than a person’s life. There are still many people who die due to lack of money. Their families are spending all their savings and even after that, there are many cases in which the person dies. ‘Save Money and Money Will Save you’ is the situation, most of the people should get used to for their survival in the current scenario.

3. Labour Is Superior To Capital

“Labour is prior to and independent of capital. The capital is only the fruit of labour, and could have never existed, if labour had not first existed. Moreover, ”Labour is superior to capital, and deserves the higher consideration” a famous quote by Abraham Lincoln truly justifies the above situation and the story.

Life is a dream for the wise, a game for the fool, a comedy for the rich and a tragedy for the poor. Similarly, this story also justified all these stages of life that different people have to face during different situations.