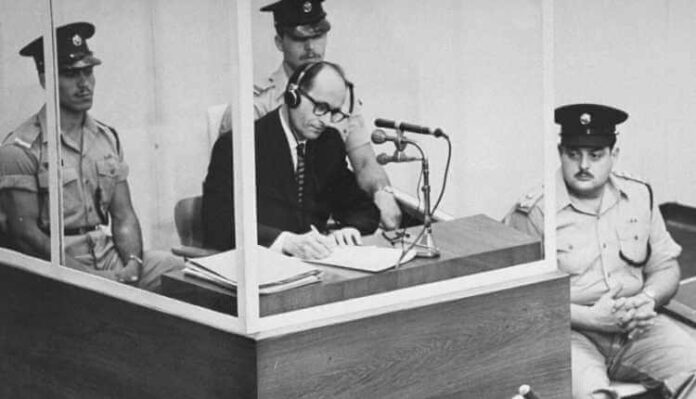 Adolf Eichmann (1906-1962) was one of the main organisers of the holocaust. He was behind the deportation of Jews to the ghettos and concentration camps located in Eastern Europe during World War II. After the war, he was charged with war crimes and was arrested by the Americans. He was kept in detention but escaped to Argentina by using a false identity. However, when the Israel officers got to know about his whereabouts, they went and arrested him on 20th May 1960.

Adolf Eichmann was born on 19th March 1906 in Solingen, Germany. He moved to Austria during World War I. There he joined the Nazi Party in April 1932. He was engaged in looking after the Jew affairs of the Nazi during World War II.

In January 1942, a conference was held by the high officials for organising the logistics of the “final solution” of the Jews. Eichmann was the person who was given the duty to coordinate the details for the same. However, at this point, it wasn’t known that the “final solution” was nothin but the mass execution of the Jews and thus, Eichmann played a significant role of the Chief executioner. He was responsible for the identification and assembly of Jews from all places in Europe as well as their transportation to the final destinations at Auschwitz concentration camp in Oświęcim, Poland and other extermination camps.

After the war was over, in 1946 the U.S. forces captured Eichmann. However, he managed to escape from the detention camp. He used a false identity to live in Germany for several years until his identity was discovered and he was forced to flee to Argentina, where he settled in 1958.

The Israel officials having the whereabouts of Eichmann decided to abduct him from Argentina as they sought no hope of help from Argentina. This was because Argentina was known for refusing extradition orders.

On 20 May 1960, Mossad, the national intelligence agency of Israel captured Eichmann outside his residence and took him out of Argentina to Israel. On the abduction of Eichmann, Argentina protested to the United Nations Security Council that the abduction was a violation of their sovereignty. However, the dispute was resolved, and the trial of Eichmann begun.

What is the Eichmann Trial?

The trial of Eichmann began on 11th April 1961 in the District Court of Jerusalem, Israel. The case again, Eichmann was presented through the course of 56 days. During the whole trial proceedings, Eichmann was made to sit inside a bulletproof glass booth to protect him from any sought of attack or assassination attempt. During the trial, Eichmann denied his responsibility for the mass extermination of Jews. He said that he was only following orders, and he claimed, “I couldn’t help myself; I had ordered, but I had nothing to do with that business.” He exclaimed that he was only responsible for transportation. When asked about the gas van incident of Chelmno, he added “I didn’t look inside; I couldn’t. Couldn’t! What I saw and heard was enough. The screaming and…I was much too shaken, and so on.” While he was involved in the crimes he would seek to keep a distance at the time of the actual killing. However, he showed no remorse but was proud of his actions and the way he conducted the operations.

The trial was arranged before a three-judge court. This trial was very special because it did not stick to written documents but upon the testimony of the survivors. The experience of the survivors, especially those who fought their way through the concentration camps and the ghettos. Many of those who have been silenced were given voice through the confrontation of the horrors of the War. The trial was different from other war crimes trial because it put forth the emotions and sufferings of the Jews, which were not even captured in the Nuremberg Trials, which were held more than a decade earlier. It gave voice to the survivors of the genocide and full insight to the world about the Holocaust., involving hundreds of documents and 112 witnesses (many of them Holocaust survivors)

After seven months he was convicted and on 12th December 1961, he was given a death sentence. The defence approached the Supreme Court if Jerusalem but it rejected the appeal. Eichmann was executed on 1st June 1962. It is the only case where a death sentence was executed in Israel.

All the proceedings were broadcasted and covered by the prominent media agencies and the atrocities during the Nazi regime was uncovered. Exclusive rights to video record and broadcast through television the proceedings was obtained by the Capital Cities Broadcasting Corporation of the United States. Many other major newspapers sent their reporters for covering and publishing the trial details. It was all organised at the Gerard Behar Center in central Jerusalem. Around 750 seats were made available for the journalists to allow them to watch the trial on closed-circuit television.

The trial was one of its own and one of the most important in the history of World War II. The judgement changed the history of Israel as well as the whole world. It changed the perspective of people towards the war while exposing the atrocities and huge bloodshed that were inflicted by the Nazis. It gave voice to the sufferers and empowered justice to all. It gave hope and strength to all those who survived the horrors of the war. Silence gave away to truth and was replaced by justice.