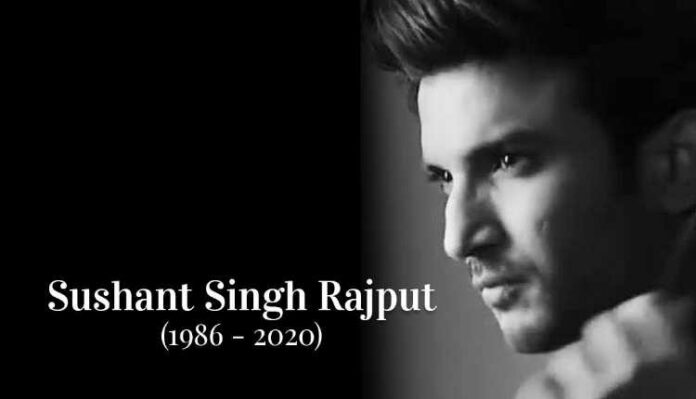 Bollywood’s versatile actor Sushant Singh Rajput, also known as “Bollywood’s MS Dhoni,” tragically passed away on 14th June after he allegedly committed suicide at his house in Bandra. Sushant’s death not only shocked the entire film fraternity but the whole nation, where each and everyone has been mourning Sushant’s sad demise. After his death, many questions have arisen. Why did he have to take such a drastic step? Everyone’s first reaction to his death was that he had committed suicide as he suffered from depression. The probe into his death has recently opened up a pandora’s box with new speculations emerging every day. Let’s look at Sushant’s life and what has happened in the Sushant Singh Rajput’s case so far and why it will be difficult to find easy answers in Sushant’s death. 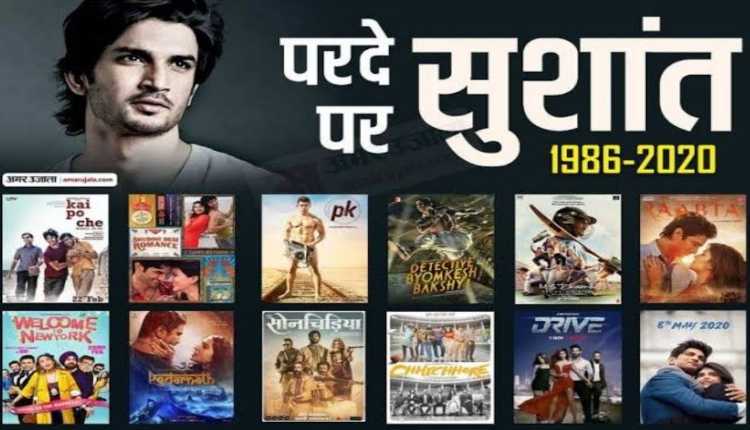 Sushant Singh Rajput made his first debut in Films with “Kai Po Che” released in 2014 which was his first movie and later was seen starring in films like “PK,” “Shuddh Desi Romance,” “MS Dhoni: The Untold Journey,” Drive,” Detective Byomekesh Bakshi.” etc. He made his first acting debut on TV with Ekta Kapoor’s serial “Pavitra Rishta.”

He garnered applause for his brilliant acting skills in almost all his films. “MS Dhoni,” in which he starred as the former Indian cricket team captain, was a blockbuster and the most successful film of 2016.

Sushant played a confused lover boy in “Shuddh Desi Romance,” also amazed the viewers and proved that he could also play a romantic lead with ease. Apart from these films, he also worked in movies like Abhishek Chaubey’s “Sonchiriya” and proved his acting stalwarts similar to those of Manoj Bajpayee.

In 2018, Sushant starred in “Kedarnath,” opposite Sara Ali Khan. His last appearance was in “Dil Bechara,” which was released on Hotstar in 2020, becoming the highest watched film on the OTT Platform and proved to be a major blockbuster.

The first most significant debate that followed the 34-year-old young actor’s tragic death was around depression and mental health. The actor was reportedly undergoing treatment to deal with suicidal thoughts. There was supposedly warning signs that he was giving out. 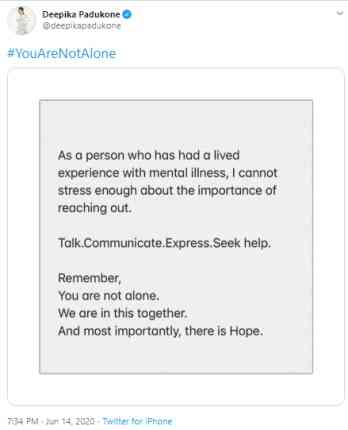 One message that was out loud and clear, from medical health professionals or celebrities no one, is alone, and celebrities were seen talking about mental illness on their Social media platforms. 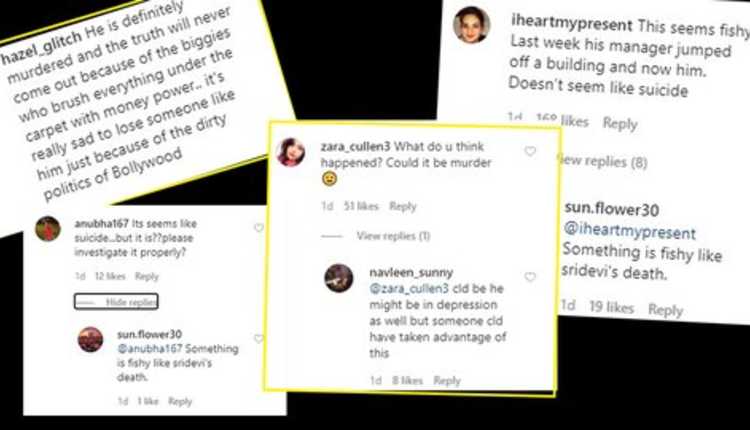 What do you think about what role is played by show business, filmmakers, famous for fulfilling dreams and equally responsible for crushing them? Some of the commentaries around the bitter, fickle ways of the Bollywood film industry elevate as quickly as it dumps.

Media Reporter’s treatment of Sushant’s death created a separate strand of debate where insensitivity was displayed, which included barging into the home of Sushant’s father and forcing a mic into his Sushant’s father grieving face, it was not new and expected from the reporters. The only surprise here was that audience expected the news channels to behave differently. But the brutality of media didn’t end there just after 5 mins, after the news breaking of his death, his body’s pictures were leaked, including closeup shots, photos from different angles went viral everywhere, which was very strange considering the access to the room was limited. It seems it was systematically leaked to the media. 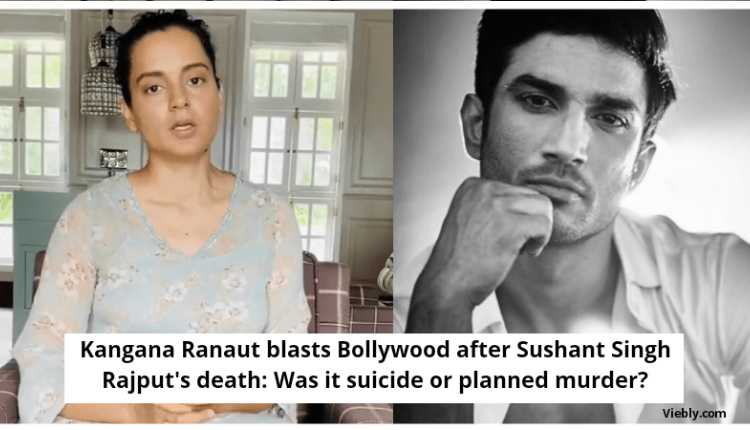 SSR’s death also started a storm of analysis about the star kids-outsider debate in Bollywood. In his sad demise, some of them saw the end of dreams of a passionate actor who has worked hard to make a mark in this industry. Sushant was held up as a successful example of a self-made actor who made it on sheer merit, without any connections or Godfather. Kangana Ranaut’s expressed her opinions on Nepotism in Bollywood on Karan Johar’s talk show “Koffee with Karan” aired in 2017. She reiterated this in several interviews she appeared since then, and she had a separate hashtag-fuelled follower on social media.

Kangana recently has been seen accusing influential Bollywood personalities, filmmakers whom she’s also named the ‘movie mafia,’ of being involved in propagating Nepotism in the Bollywood industry. Kangana believes that Nepotism was the actual reason that ruined Sushant’s career.

The nepotism debate is going on for a long time. Interestingly, Rajput got a leg-up on TV from famous producer Ekta Kapoor. Balaji Telefilms was her company, which produced his popular TV series Pavitra Rishta (2009-2011). Sushant’s movie debut Kai Po Che! (2013) was also directed by Ekta Kapoor’s cousin, Abhishek Kapoor. Over his entire career, Sushant worked with both “outsider” and “insider” filmmakers. 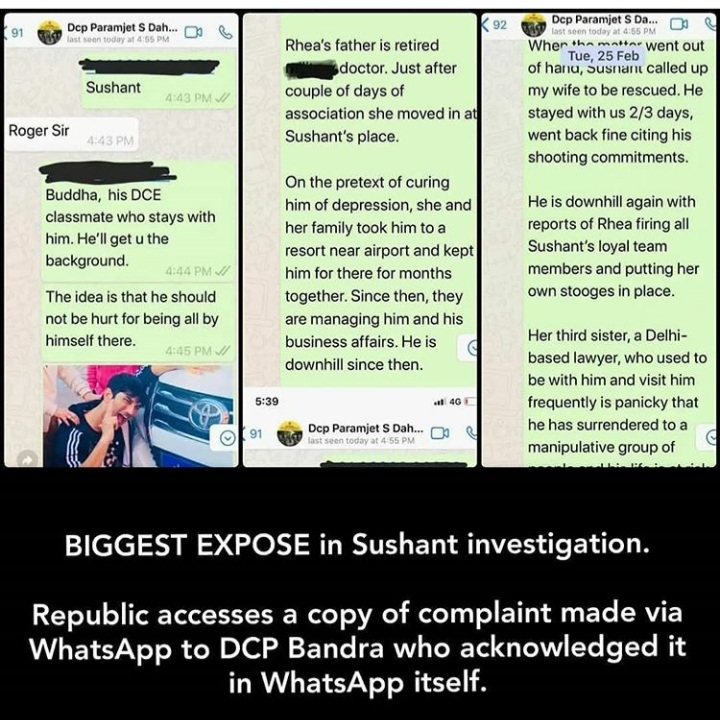 Now coming to the scene of the crime, before his Sushant’s body was taken out, pointed out many discrepancies between what the police disclosed and what was actually seen in the room with the help of video and photographs released: 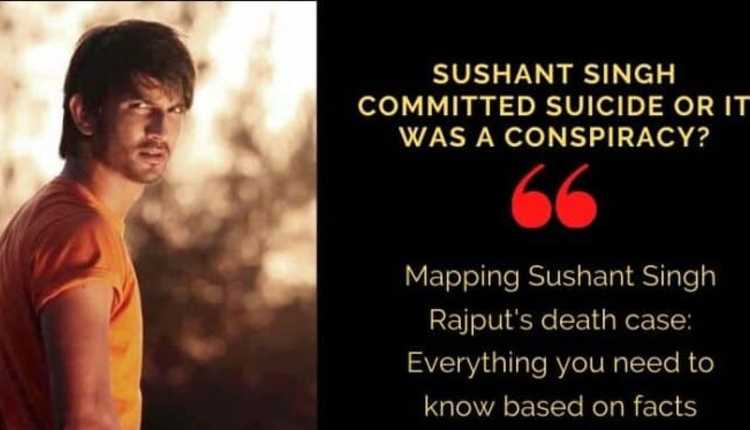 Fans, celebrities, and well-wishers are clamoring for a proper CBI investigation, requesting the PM to take the case more seriously to ensure justice is given to his family and fans as they no longer have faith in the local police. 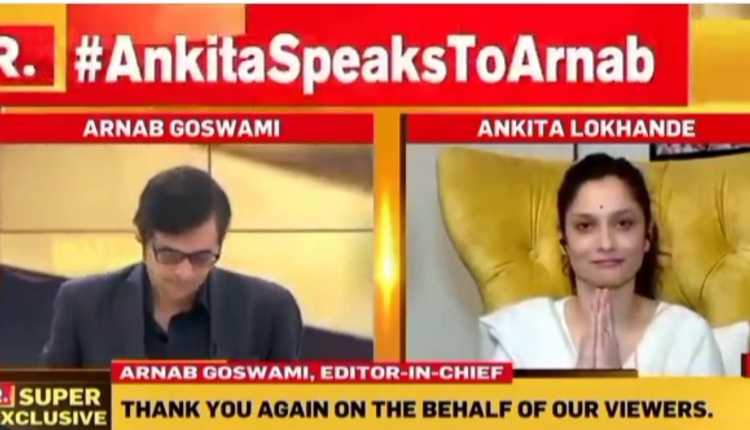 In the latest development, Sushant’s former girlfriend, Ankita Lokhande, claimed in an interview with Arnab Goswami that Sushant was the kind of guy who used to find joy in little things. He couldn’t have taken his own life because he believed suicide to be a “terrible thing.”

Sushant’s father, K.K. Singh, has filed an FIR with the Patna against Rhea Chakraborty under various sections, including abetment to suicide, alleging that Rhea and her family members financially cheated, threatened Sushant that she will release his medical reports to public proving him a crazy person and mentally tortured Sushant.

Rhea Chakraborty, Sushant’s former girlfriend, has also released a video statement that went viral where she spoke about all allegations made against her on her in connection with Sushant’s death are false. 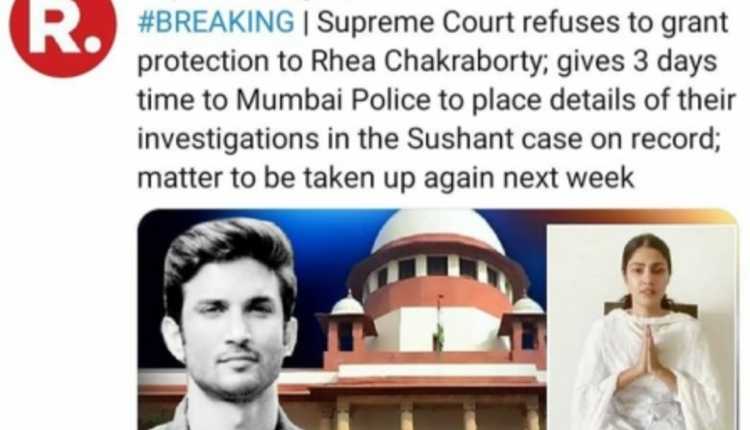 BJP MP Subramanian Swamy recently claimed that actor Sushant Singh Rajput was murdered and provided several possible evidence and remarks about what could be possible to support the theory. 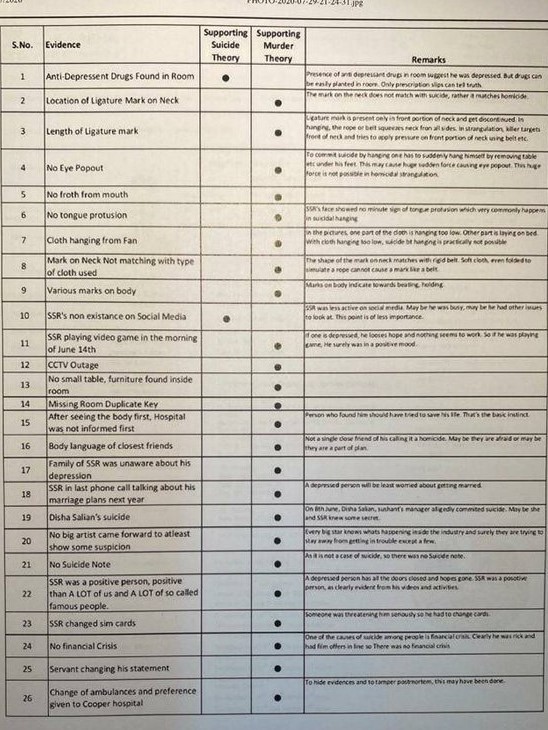 News channels every day are coming up with new headlines with new twists and turns in the case, revealing new accusations against Rhea one by one, talking about how Rhea withdrew.

Rs 15 crore from Sushant’s bank account, how she and her family threatened the Sushant in a well-planned conspiracy and had opened new companies with Sushant’s hard-earned money. It was also reported Rhea left Sushant’s house on 8th June with cash, jewelry, and credit cards. 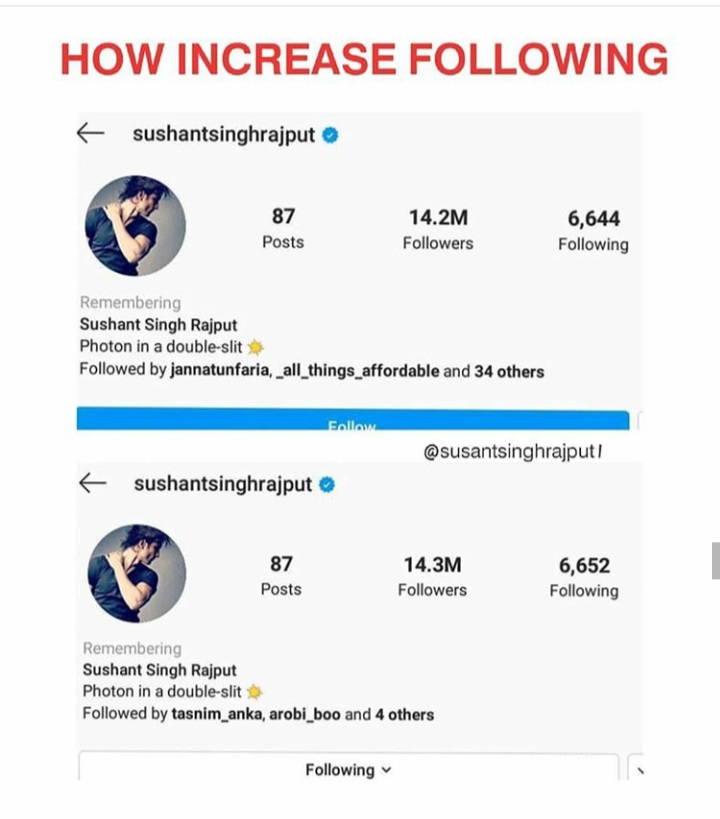 What seemed unusual is that after his death, his phone, which was in the police custody, his social media accounts were being tampered by someone present there as a change was noticed in the following list. 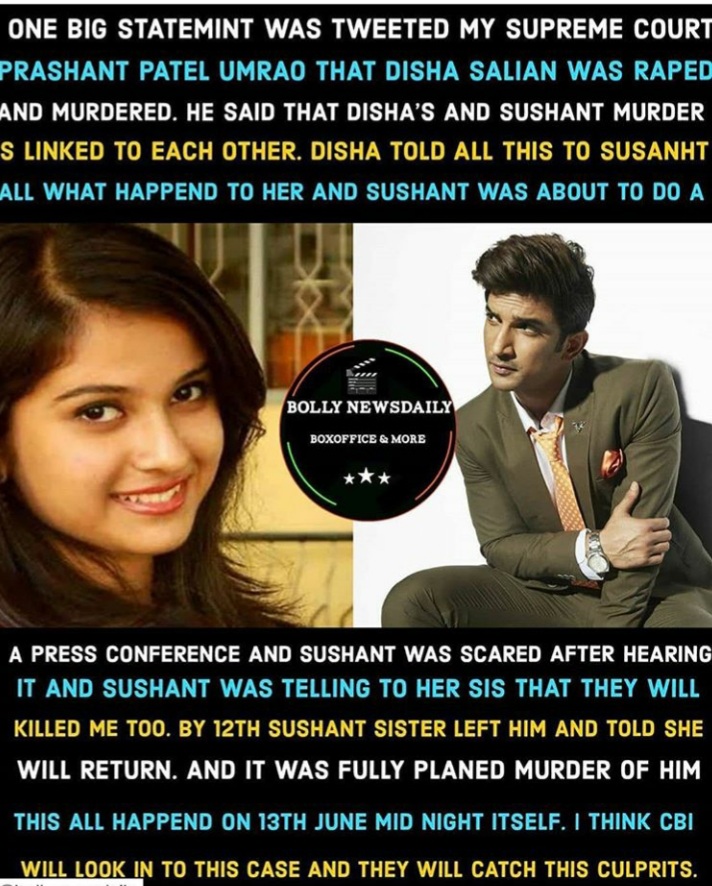 Recently news reports were coming where it is said Sushant’s death was connected to his manager Disha Salian suicide eight days, and now everyone is wondering whether her death is linked to Sushant’s death.

One fact remains that the Bollywood industry has seeped in a quagmire of politicians and underworld, and the fate of actors and movie makers are controlled by them, and with their help, they even decided who would star in the films. The police forces in Patna and Mumbai are busy clashing and not supporting each other. Bihar politicians believe a deep-rooted conspiracy is behind Sushant’s death that Mumbai police is hiding. Every day, there’s a new politician, agency, journalist, and a new actor jumping into the case surrounding the investigation of Sushant Singh Rajput’s death. At the same time, the entertainment media and people on social media platforms conduct their own trial of the case. 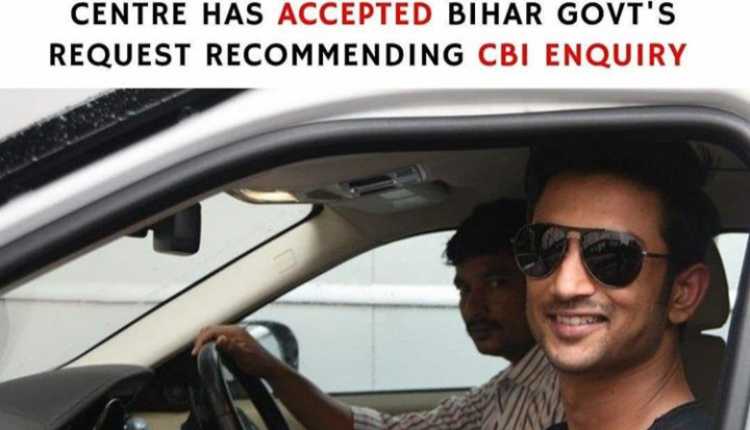 Recently on 5th august, the supreme court has accepted the Bihar government’s CBI probe request of Sushant’s death case. Now that is a step towards justice, and hopefully, his family will get the justice they deserve. 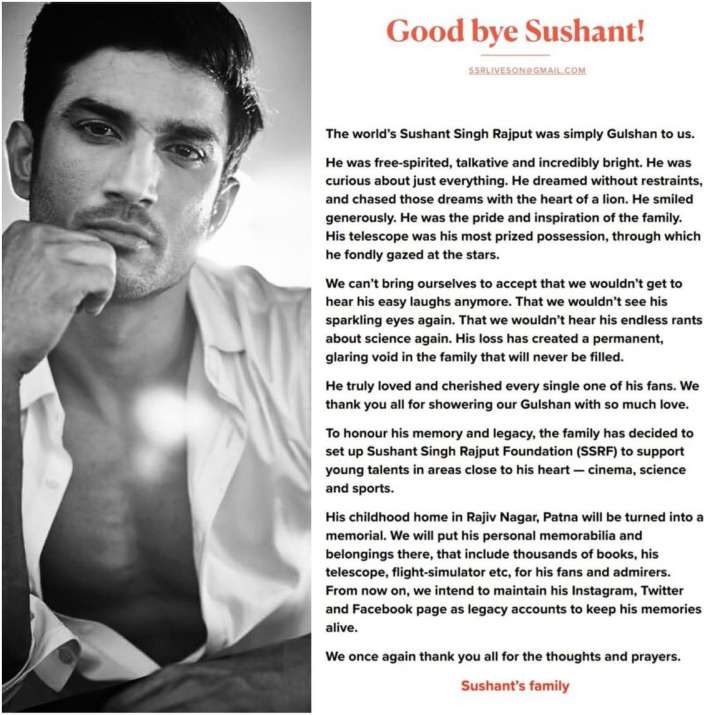 The mystery of his death remains more pervasive. There will be no easy answers in his death because no one is ready to accept why such an intelligent, ambitious, and humble person leaves the world silently without leaving a suicide note. Sushant’s well-wishers and supporters believe that once the case is solved and Sushant gets justice, they can give a dignified, final goodbye to the beloved star they loved.