Diwali: Bring the Change in the way you Celebrate 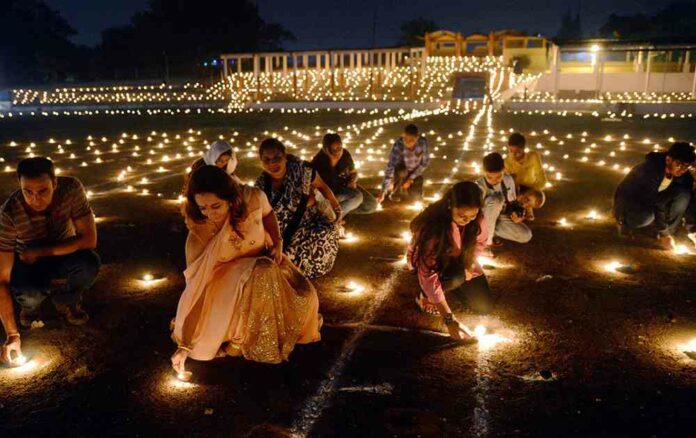 Diwali is considered as the festival of lights — is one of the best days to gain the blessings of god and distribute happiness among family members and others, but our activities and the way of celebrations is harming to ourselves. That is why some changes are needed in our own interest and the way we celebrate the Deepavali.

So, what are the changes that are needed? Well, no changes are needed in the basic concept of the celebration of Diwali. When I say it “Basic Concepts”, I mean that every festival is perfect and remembering god while spreading happiness does not require to burn crackers or play  loud music.

Nowadays, just for the entertainment we have adopted few extraordinary ways to celebrate the Deepavali  which is ultimately harming our environment and us — directly and indirectly. In many aspects these newly adopted ways of celebration are causing bad and ill effects which are needed to be changed in the interest in the people’s environment, nation and the society.

Today, the changes are needed only in our newly adopted methods — so called “the style” of celebration. The changes that are needed :

1. Changes in the Interest of Environment

When it comes to Diwali Celebration it is very common to burn crackers even after knowing that it contains harmful and hazardous chemical substances such as — Sulfur Dioxide, Cadmium and Lead etc. These chemicals are not only harming our environment, but also causing many health problems such as asthma, breathing problems and even cancer.

When we burn crackers it releases toxic matters and particles in the environment known as the pollutants which are further causing health to environmental issues. Nothing is needed to say that we should reduce the use of these things in the celebrations since we all are aware about the consequences.

We all are living in a paradise which support life form, it is a place where we all — the plants, animals and humans are living is known as the “Environment”. We the humans have become the destroyer of this paradise by burning crackers, releasing toxic materials from the industries into the river streams and air. We are adding a large amount of pollutants in the environment which is the only place that supports the existence of the life — not only for human beings, but for all other living creatures on the earth. Adding pollutant in the environment can be called a perfect  move towards committing indirect suicide.

2. Changes in the interest of the Nation

Nowadays, using foreign products has become a trend which does not sound good at all. Have you ever wondered that, “is it a right trend? Definitely not! Without thinking much, we are simply buying foreign products from the countries like China, USA and Japan, etc. and for which we are flushing a lot of revenue to these countries.

Most of you might be aware that for a competitive and strong economical growth International Trade is the backbone for any country where India is lagging behind in many aspects and for which we should be held responsible. By not buying Indian products we are degrading our economy; which is a clear indication that there is need to change the mindset and we should be more forced up on buying goods made in India instead of the foreign made products.

3. Changes in the interest of Society

Potters whom we address as “Kumhars” in Hindi are one of the very important classes in the society. They are not only Potters, but also a sculptor and ceramic artist. Their creative work is not a cup of tea, but a hard work and dedication. Most you may have visited them and observed the hard work that they do with a great concentration, but with the coming of the foreign products mainly from China are now seen as the alternative to the products made by the Potters.

Foreign products look attractive and are cheap, but we should also not keep ourselves in darkness by ignoring the fact that these products are made from cheap quality products and even sometimes from the harmful and hazardous materials and chemicals.

By using Foreign products we are not only depleting our environment, but also degrading the economy of the nation which is neither in the interest of the society nor the nation.

Earlier we used Diyas which were made from the clay and was completely disposable, but today Chinese Diyas are in trend which are either made up of plastic or other harmful materials.

The time has come to bring the change and to be the change in the interest of the society, nation and the environment.