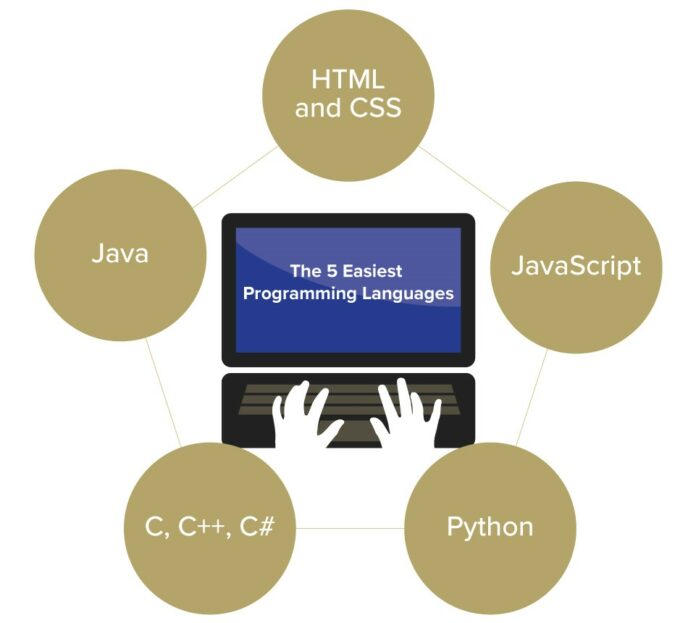 Learning to code will enable you to make substantial career advancement, whether you intend to improve your current position or launch an entirely new career. Jobs involving programming are anticipated to expand in the future since technology will likely continue to play a significant role in our lives. Starting your route toward becoming a programmer or software developer can be intimidating. There are several programming languages, frameworks, and technologies, so choosing which ones to learn first might be challenging.

You may be unsure of which programming language to master initially. The most practical language to learn varies depending on the type of work that intrigues you because certain languages are more relevant in various areas. For instance, if you want to work in UX/UI or online design, studying HTML and CSS—the languages that power most of the world’s websites—might be a smart way to get started.

On the other hand, using data-focused languages like Python is necessary for a job as a data analyst or data scientist. Additionally, software engineers and developers generally use Java, C, JavaScript, and numerous other languages to create their goods. Once you’ve chosen your area of emphasis and the first coding language to learn, consider that the approach will need effort and self-discipline.

It can be difficult to learn your first language because so many themes and ideas will be unfamiliar. However, mastering other technologies becomes simpler once you master your first language. Language differences do not affect the fundamental ideas of creating code, functioning in a programming environment, or the programming structure itself. Don’t miss the 10 simple coding interview questions and their answers using Python.

Some of the Easiest Programming Languages

Coding is a key skill used in some of the top job sectors in the country; thus, learning programming can help you succeed in various professional domains. We’ll check some of the most beginner-friendly programming languages in this list to help you enter the industry.

Varied elements of a webpage might have different visual designs, thanks to CSS (Cascading Style Sheets). You can advance your career or switch to a completely different profession by learning HTML and CSS. Understanding CSS and HTML fundamentals are essential for marketing, graphic design, UX/UI design, and web design careers. In addition to being an essential component of creating emails and web pages, HTML is a language that developers and non-developers will encounter at some point of time in their careers.

JavaScript enables programmers to incorporate intricate, dynamic components on websites. Most websites wouldn’t have motion or interactive features without JavaScript; they would merely display static content. JavaScript enables web developers to offer dynamic experiences for their users on both the client and server sides. Although HTML and CSS are still required for websites and applications to define the page’s basic layout and formatting, web developers can utilize JavaScript to augment and optimize these aspects to make them more appealing to consumers.

JavaScript can improve a website’s functionality by adding interactive components. Web developers can use the language to add animations, draw users’ attention to a particular website section, or create applications for web pages. It can also help develop mobile or online applications using a range of web frameworks, including React, Node.js, and others. The object-oriented nature of JavaScript allows for creating code and knowing JavaScript can help you understand the ideas behind other programming languages.

Python is frequently used as a beginner’s programming language by those looking to enter the field. It is utilized in many industries, including website development, deep learning, data analysis, system administration, software development, and more. It’s comparatively simple to learn, which makes it an excellent choice for novices because its straightforward syntax is more like natural English.

Many developers regard Python as the most practical programming language since it can be applied to a wide range of jobs in numerous industries. Even those who do not work in programming can benefit from learning Python because it is a popular language for automating routine operations. Python scripting is widely emphasized in many data-focused career pathways, and it’s necessary for anyone seeking employment as a data analyst or back-end web developer.

Java is an object-oriented, class-based programming language made for all-purpose use and favoured for cross-platform applications because of its “write once, run anywhere” attitude. It is common in various development fields, including desktop and mobile. Although it’s not quite as simple to learn as languages like Python, Java development is a strong career with plenty of opportunities.

Java is also a great choice for a beginner programmer. Since Java’s grammar is comparable to that of other languages (such as C, C, and C#), once you understand Java, your knowledge will also apply to those other languages. It is a particularly popular language for software development since it allows for the deployment of applications across several platforms. Also, it’s frequently used for creating mobile applications and plays a significant role in Android app creation.

The sector of software development is expanding and offers various opportunities to individuals planning to launch their careers in the field. Think about studying one of the languages in this manual to develop a grasp of crucial programming ideas that will support projects throughout your professional life. You can enroll in the online computer programming courses offered by Knowledgehut to become a skilled programmer and develop the required skill set. You can learn the most in-demand languages and technologies with the help of the courses and advance your career as a programmer.