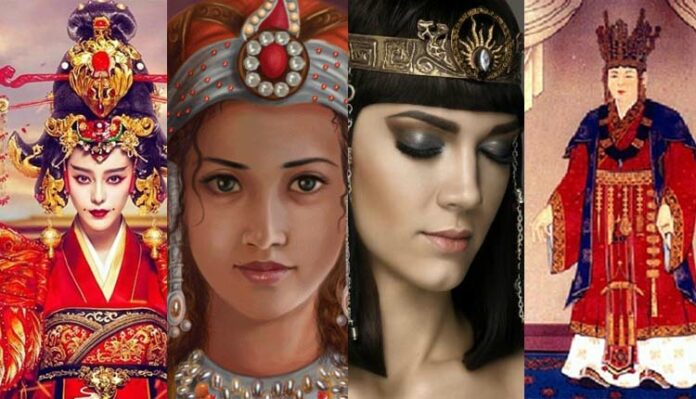 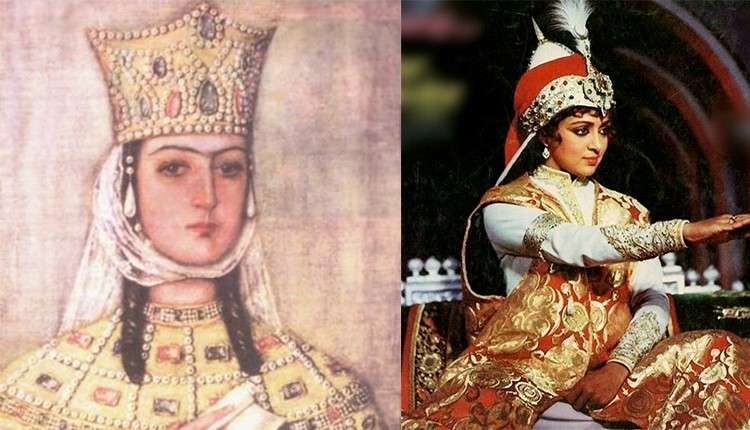 The first female Muslim ruler of the Delhi Sultanate gave up on the traditional female attire and incited the fury of the conservative Muslims by ditching the purdah. She responded to the term ‘Sultan’ rather than ‘Sultana’, citing that Sultana referred to the wife of Sultan. Not to the ruler. She even had coins minted in her name. She was made an heir because her father deemed his other sons not to be incompetent. Unlike Queen Seon Deok, her rule was not supported by the nobles. Hence, Rukn-Ud-din Firuz, her brother, was made the king. In the guise of the king, he ruled his mother. Because of tyranny, Razia usurped him with the power of the people and became the first female ruler. Unlike other women of the time, she would go to the capital on elephants and note the situation. Razia stood at the forefront during battles. Her gender was irrelevant. Had it not been for the intervention of the nobles, one wonders just how great a ruler she would have been. Her relationship with Altunia is also a major topic of interest. A childhood friend led a rebellion against her to make another one of her brothers a sultan. Some say he was driven by jealousy towards Yaqut, Razia’s right-hand man. She was captured but treated ‘well’ because Altunia liked her. To escape death, she married him. Together they led a revolt, but it ended up getting crushed. They fled, and their story came to an end after being killed by some Jatts. Miraj-i-Siraj called her a great monarch. Wise, just, generous, benefactor to her realm, dispenser of justice, protector of her people and leader of an army. He said she had all the attributes one would look for in a King. She is easily one of the famous queens in Indian history. 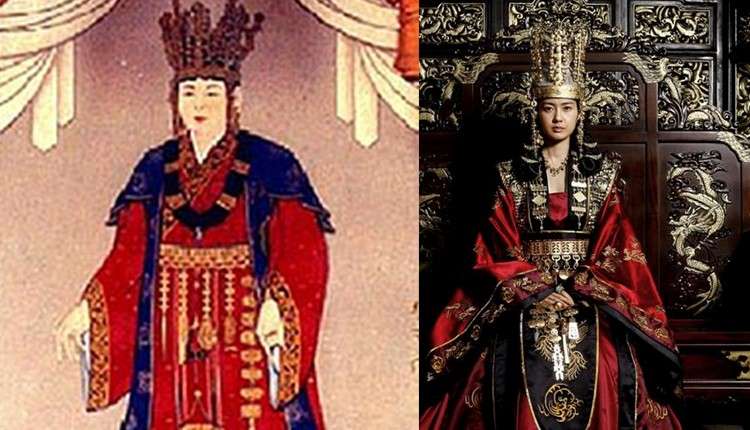 Princess Deokman became a queen when Korea was divided into three: Shilla, Baekje and Goguryeo. Like with Razia Sultan, her father decided on her as heir. He did not have sons of his own. She announced her wish to reign. King Jin Pyeong and the court accepted her after she proved herself. Though not everyone did. Ichan Chil Suk and Achan Seok Pum rebelled. They were defeated and punished. Thus, she became the first female ruler of Korea. With continuous assaults from Baekje and Goguryeo, she reigned during a tumultuous time during Korean history. Her primary concern was the welfare of people, and she worked to improve the lives of widows and widowers, orphans, the poor and the elderly. Through diplomacy and stratagems, she contributed to the unification of the three kingdoms and relieving poverty. At the same time, she promoted art, literature and astronomy. Queen Seondeok is credited with making the first astronomical observatory in East Asia. The biggest rebellion in Korean history marked her reign. Bi Dam, the chief minister, led a revolt against her citing that women can not rule. Queen Seon Deok, with the aid of Korea’s greatest general Kim Yu Shin and Kim Al Cheon, crushed the rebellion. Unfortunately, as the rebellion came to an end, she died, supposedly, of natural causes. Her successor, Queen Jin Deok, executed the rebellions. According to Samguk Sagi, the queen was generous, benevolent, wise and smart. 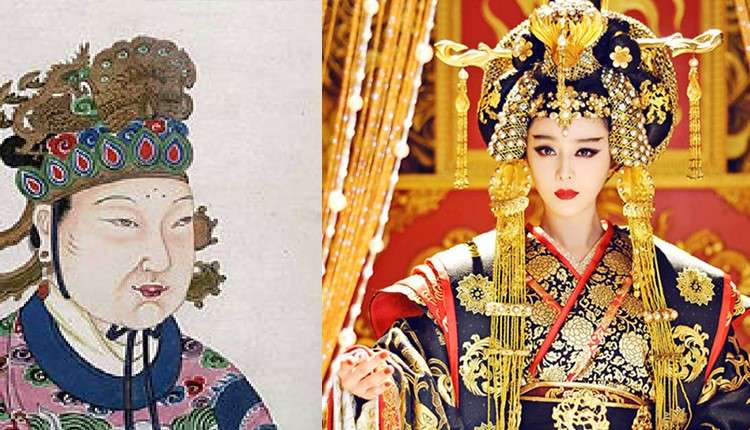 Niccolo Machiavelli would be proud of this Queen. A scholar in the Machiavellian brand of politics, she destroyed dissenters, rewarded allies and reigned with fear. At the same time, she a beloved Queen to her people. All while knowing when to bow and when to roar. She is credited as being the only empress of China. Starting as a concubine to Tang Emperor Tai Zong, she became the queen to his son, Gao Zong. She murdered her child and later accused the Queen and another concubine to be the murderer. Whether that is true or not, she certainly deposed her sons (plural). When she declared herself to be the Queen, she established a new dynasty: The Zhou Dynasty, which died with the end her of reign (from where the Tang dynasty restarted). She also formed secret police to deal with potential rebels. For the same, she installed boxes for the common people to contribute to the same. Due to Confucius scholars having a particular opinion of gender roles, a lot of what we may know of her might be coloured be prejudices, thus, demonizing her role. Modern scholars would beg to differ. There has been a resurgence in how Wu Ze Tian’s viewed. She is easily one of the most known Chinese rulers in the world. Emerging as iconic among names of queens and princesses. 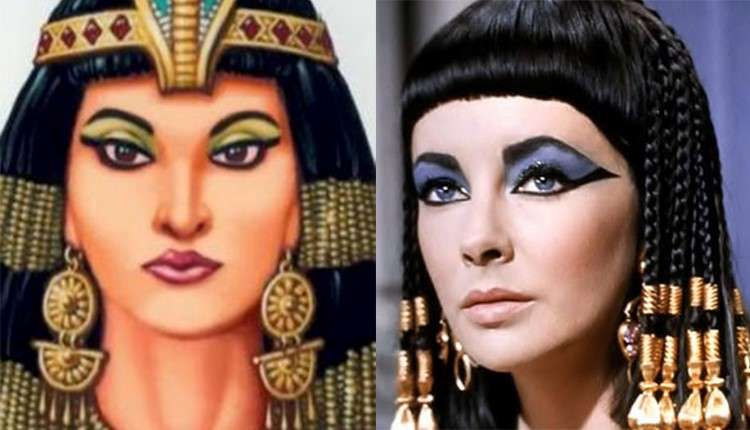 Though an Egyptian rule, she was not Egyptian by ethnicity. She traced her origin back to Ptolemy, Alexander the great’s general. After the death of Alexander, Ptolemy took over the reins of Egypt. Cleopatra went on to become the first of them to take the pain to learn the Egyptian language. Due to Roman propaganda, she is thought to be a temptress who led to the fall of great men. She was intelligent, too. Multilingual, she was educated in math, philosophy and astronomy. Also, a great orator. Blood of her siblings matted her hands. She fought her husband (and sibling) for the throne and teamed up with Julius Caesar to win the civil war. She remarried another of her brother and killed him, too. And is known to have killed a rival for the throne, her sister. Mark Antony and Julius Caesar were two of her lovers. Caesar had a child with her. He even erected a statue of her in the temple of Venus Genetrix. They both were quite open about the relationship.

Cleopatra was in Rome when Caesar was assassinated. Her fashion sense became all the rage in Rome. Just like her relationship with Caesar, her and Mark Antony’s relation had a political shade. They were in symbiotic relation. Antony offered the protection, and Cleopatra offered money. They formed a drinking club known as ‘Inimitable Livers’. It is said that they used to disguise themselves and travelled the city of Alexandria, playing pranks on the residents. He soon married her, and they had three children. Antony’s rival, Octavian, used it as a tool of propaganda to portray Cleopatra as a seductress clutching Antony. She led a fleet against him. Unfortunately, the two losses against Octavian and a few forced them to flee Egypt. People say she died by asp bite, but there is much controversy surrounding it. She is probably, one of the most famous names of queens and princesses.