How has the Journey of Women in Defence Forces of India evolved? 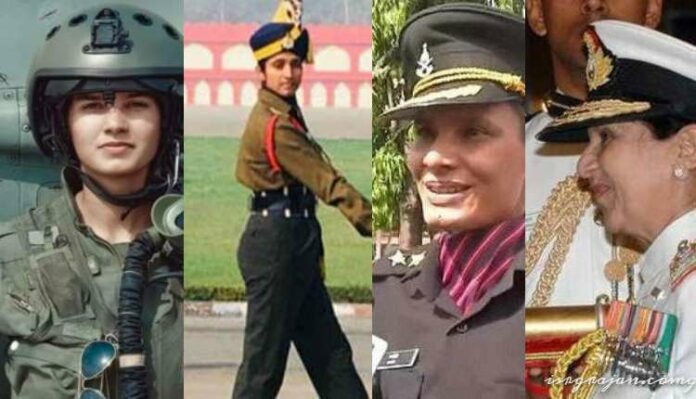 Women constitute fifty per cent of the world’s population and the same holds good for India. All these years the contribution of women both in and out of their ‘so-called premises’ being their ‘ house’, has been commendable. Defence is one field where the direct contribution of women remains comparatively lesser but the scenario is changing fast in this field as well. The latest Supreme Court judgement for allowing women to take up NDA examinations on the basis of a petition is an example.

The name of Razia Sultan reigns even today. She was the appointed successor to Iltutmish from the Slave Dynasty and the first woman to hold the position. Her valour, courage, the determination was no lesser than what was expected from a position like hers but she was condemned vehemently for being a woman. Yet she has fought her rights both for the province and against discrimination.

‘Jhansiwali Rani Laxmibai’ is a household name but her actions can never be compartmentalized as being ‘common’ especially in the society that she was a part of. Lord Dalhousie’s policy of Doctrine of lapse was meant to take away Jhansi from her hands. By fighting until last breath saying ‘ I wouldn’t give my Jhansi’ she has proved to the world not only the ‘Womanpower’ also the duty of a position in safeguarding her province from any foreign attack.

“I want also a unit of brave Indian women to form ‘Death-defying Regiment’ who will wield the sword, which the brave Rani of Jhansi wielded in India’s first war of Independence in 1857. “These were the words of Subhash Chandra Bose who didn’t distinguish between male and women, masculine and feminine rather saw the independence struggle as a great opportunity to include women by the formation of ‘Rani of Jhansi’ Regiment and recruiting women into it. Captain Laxmi Swaminathan’s name is always associated with its glory.

Apart from these, the formal efforts include the formation of the Indian Military Service in 1888 where women have served providing medical aid during the time of the first World War.

The Indian Women at a Glance in Arm Forces:

This name surfaced all along in 2016 for her being declared as the first Combat Pilot along with her other two cohorts. War and combat areas are the ones that are usually reserved for men and entry of women into this field hasn’t been organic rather a whole lot of effort has been taken even when they were termed competent enough. The fact still remains not in blaming the services entirely rather the change is expected to come from the society as a whole.

Avani is lauded for being the first Indian woman pilot to take a solo flight in a Mig-21. Avani says that ‘fighter is the one that defines any Air force and one is made is fight the war and win the war’. This path shown by her is an aisle for many to follow in the coming days.

‘She is the woman behind that successful man’, Lt. Bhavana Kasturi is an anomaly to this quote by becoming the first woman to lead a Contingent of Indian Army Service Corps of all men on the 26th of January 2019. This comes on Republic Day, the day which reminds us that ‘Sovereignty’ rests with the people. Thus the 70th Republic day was an amass of ‘Nari Shakti’ (woman power).

A year before India even got independence this woman was born and her family moved to India during partition. She rose to the rank of Surgeon Vice Admiral thus becoming the first woman in the Indian Armed forces to be promoted to a three-star rank.

‘He gifted us a life of pride’ these were the words of Lt. Jyoti Nainwal when passing out from Officers Training Academy, Chennai in November 2021. The wife of late Naik Deepak Nainwal, a mother of two, became the epitome of courage after joining the forces after the demise of her husband. Today, the whole nation is proud of her.

These are only a few who are serving the nation operationally. Thousands of others have given their sons and daughters to the service and wait to see them, in anticipation and fear many a time. Many a thousand wait for their loved ones to come back. The prayer and service of these women are also no lesser. We, the people of India are indebted to their service. ‘Equality’ as enshrined by the constitution will be seen soon in the defence forces of our country too.