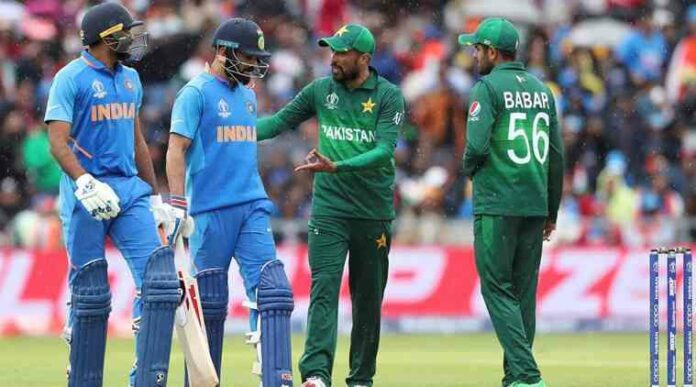 History is created but not made, this is what they say, and when it boils down to Indo –Pak cricket then this adage proves to be wrong A lot of history within the game and outside the game are being created which are made. This bi-nation duel of sports brings the politicians to play their game behind and in front of the curtain. The industrial houses come forward in a big way to shed their money on the game as they have their vested interest and money from all walks of life come and converge at a point to make a mountain of this “mole“, and it thus creates a hype which actually is nothing but a facade and more of cascade.

The main reason behind the hype:-

Pakistan as a nation after it got separated from India in 1947 believes that Kashmir was its domain and territory which the British rulers then especially Lord Mountbatten had gifted it to India and that was illegal and unnecessary It was not needed and they feel that Kashmir should have been annexed to India by the Britishers They think that India and Lord Mountbatten purposely had given Kashmir to India whereas, in reality, Kashmir should have been the part of Pakistan Having lost Kashmir the Pakistani’s had taken a bow to get it back from India by any means, by hook or crook, i.e. by raging war against India.

One of their leader Mr Zulfiquar Ali Bhutto had declared nationally that- if even we have to fight for 1000 years against India we would but we would take Kashmir after defeating India in war Thereafter there were as a many as four war fought between India and Pakistan on the years specified above and India beat Pakistan at every battle as stated here This infuriates Pakistan and every time they play India in cricket they take it as a Indo-Pak clash for their fight for Kashmir If they win it makes them feel that they have avenged their defeat that they suffered in the war at the hands of the Indians This is the reason that the Indo-Pak cricket clash sets all the excitement and Pakistan, in particular, takes it as the war that they fight to set Kashmir free from the clutches of India.

Believing this theory they attacked India in 1965, in 1971 and in 1999 at Kargil and each war that they raged against India they lost them hands down This has set a kind of a notion in them that every time they win their cricket matches played on the international level against India they extract their revenge against India that they had to lose in the war against India This mental aptitude of beating India in the battle in case if they beat India in cricket matches makes them to believe that this way one day they would beat India and annexe Kashmir to its portion That will be the most significant day in their history Hence every contest in cricket between India and Kashmir is a sort of a war that is played between these two nations and that is the mindset of the Pakistanis in particular If they beat India in the cricket match they believe that not only they have taken a first step of annexing Kashmir, but they feel that they have avenged their defeat against India that they suffered in the war against India.

Political Hype: Leaders of both the nation get publicity

This is a truth and a fact The leaders of both the nation whenever they fail in their attempt to come up to the expectation bestowed upon them, they use the Indo-Pak matches of cricket to come forward and meet in the course of the game That makes the word to believe that both the nations have decided to come forward to restore the peace, the prosperity, and the well being of the people belonging to both the nation Basically this is how it is portrayed but the truth is the fallible leaders take that opportunity to simply garner the publicity and cover up all their failures on the national front A kind of a notion is made to be spread like the fragrance of the flower about some friendship and it’s attempt that is being done by the respective Government of both the nation, however, these are all the fallacies that are made to underground them by giving it a false cover and politically this is how the hype is being created.

Basically the industrialist are the ones who come forward in a substantial way to pump in their money if an Indo-Pak series is held The Government especially the Indian Government if at all an Indo-Pak series is played at India invites the established industrial house to come forward and pump a lot of money in terms of the sponsors This opens the avenues for some of the industrial house to come forward and pour in the money for sponsoring the event It has been observed on many an occasion that the black money comes out of these houses and they intelligently convert them into the white This gives added incentives to the industrial houses to take out all their black money and convert them into the white one’s This takes place in both the nation at India and Pakistan if at all there is an Indo-Pak cricket concert in terms of the series held.

The Indo-Pak cricket series has always invited and attracted the world of the tinsels and especially the world of Indian cinema’s. Especially those who are there in the world of celluloid and the world of arc-lights they spare no minute lost to attach themselves in Indo-Pak cricket series Their name attached to the players simply brings in a lot of publicity and they get the attraction and the attachment of the media and it’s glare to push their link to the world of expectations that they are devoid of The useless sparks that arise of their stories with the cricket players of both the nation at times helps them to escalate their demand and their price in the market, and at times it brings them a lot of offers of the films besides the movies and it offers Their market price rises up, and also their jobs-at-hands Nobody in that matter wishes to lose an opportunity when an Indo-Pak cricket clashes are held in the country.

The “underworld“ & it’s an explosion

No sooner than the world of the “ loot “ gets to put its hand on the series that is played between India and Pakistan, they really have a field day The betting gets its place under the sun to play the game more than the players would play and the series also at times are decided by the “ betters “ who pump in their money for the same. It is unimaginable to even think about what is the kind of money that one makes through these bets but there are people existing in this world who have made mountains of money and fortune by placing their bets on the players involved in the Indo-Pak cricket series The list is endless, and the name would bring out the astonishment of them who are involved in this business of betting and it’s heir to the throne It is also that many players are involved directly or indirectly with the bookies when these bettings takes place but generally they go undisturbed.

Tuk-Tuk is a word used for the auto rickshaw in Russia and South Africa It rolls and takes you places even though you have to pay for it Tiki-Taka is the swift and short way of playing football at a very high speed and this is very common in Spain especially when the Spaniards play football The concept of tuk-tuk and tiki-taka is to be seen and believed when the media plays its role in the Indo-Pak cricket series or any match.

The kind of a media hype that is made out of these series when the two nation plays against each other simply escalates the rates of the advertisement, and it enhances the TRP which I call it as Tirpat Rapatrolla Ka Paatshaala in my own way This TRP rating actually makes up for everything, everything that the media loses, till then as a huge gain The advertisement rates primarily when the media covers up and the kind of many a compered programme’s it holds as a part of its talk during the Indo-Pak series and its aftermath is to be seen and believe.

Hype is so much made that the excitement roars up and scales the height of the Himalayas It brings in the required booty for the media and the glares that the players get out of it are something to be seen and believed This helps the media It is the media which is responsible for escalating the rates of everything if an Indo-Pak cricket contest is held and that in a long way or a short way also helps the politician.

This is what is the reality, and this is what is the actuality in terms of the fact of the India-Pakistan cricket contest In Pakistan, that nation excites it as a war that Pakistan is going to play to avenge its defeat and annexe Kashmir and India takes it to kill the goose that lays that golden egg.