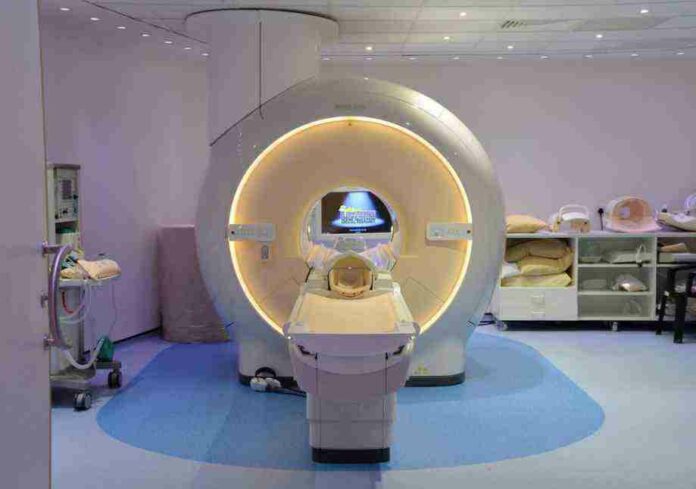 A man in India was reported dead after being yanked towards the MRI (Magnetic resonance imaging) machine. The 32 year old man, Rajesh Maru was on his way to visit his relative inside. He was told the machine was off, however it wasn’t, unfortunately Maru was also carrying an oxygen cylinder along with him, the cylinder was sucked in by the MRI machine causing Maru to inhale the liquid oxygen ultimately leading to his death.

A similar incident occurred in the year 2001 in New York when a 6 year old boy, Michael Colombini was undergoing a scan, when an oxygen tank present inside the room was yanked towards the MRI machine causing to hit his head leading to severe skull fracture and later death.

In the year 2014, a technician spent 4 hours wedged inside the MRI after being pinned between a ward assistant carrying the oxygen tank and the MRI causes temporary paralysis below his waist and internal bleeding.

The most common injuries are burns, if a patient with the metal left inside his or her body undergo an MRI scan, the magnetic fields induced by the MRI can create electrical currents in that metals, potentially heating up the soft tissue around it causing severe burns.

There are similar other tragic incidents that occurred worldwide in the past few decades. What exactly is the Science behind this, let’s take a look?:

What is an MRI?

MRI or the Magnetic Resonance Imaging is one of the most remarkable discoveries ever done in the History of the Medical Science. MRI helps the physician to get pretty much clear view of the soft tissues and internal organs, hence helping him diagnose a particular kind of abnormality like a malignancy or other.

MRI uses powerful magnets to induce a magnetic field which is 1,000 times stronger than that of a refrigerator magnet. It uses.5 to 3 TESLA (unit to measure magnetic field) where 1 Tesla represents the 1 kg pressure per second.

MRI and the Metals

Now the important part, let’s move onto the ferromagnetic materials which causes all those tragedies above. Ferromagnetic are those metals that get attracted to magnet, hence threatening to bring them around the machine.

Once it enters the magnetic field it becomes a magnet itself, many give up the field almost as easily as they accept it.

Actually, when two magnets come in contact what happens? They attract. How about positive and positive well you know they repel, thus the magnet rotate themselves and align in a way such that the opposite charges comes in contact. So when ferromagnetic material becomes a magnet what happens, we now have two magnets thus SNAP! The MRI magnet weighing tons and the ferromagnetic material weighing less like a pair of scissors, what aligns first? Yup the pair of scissors. The ferromagnetic material aligns in such a way that the charge remains opposite to that of the MRI and gets yanked towards it to get attract. Doesn’t matter what interferes in its way, much and much pressure will be applied until it reaches its destination. This effect is also known as missile effect. Imagine wearing a pair of earring entering inside the MRI room. The earring pierced out of the ear, oops! Not a good day at the Dr’s office.

So, the smaller ferromagnetic material would subject to the intense force that will be working to align to reach the massive polarity of the MRI magnet.

Now you need not venture far to know what happened in all those tragedies.

What are MRI Safety Norms in India and abroad?

As per the standards and the MRI Safety norms the, usually there are to be four zones namely Zone 1, 2, 3 and 4. Well, lets look the difference between the different MRI zones:

Zone 1: — This region includes the all areas freely accessible publicly, basically everything outside the MRI itself.

Zone 2: — It is the interface between the zone 1 and the other zones. Here patients are met and transforms into candidates for MRI examination. The history and other questioning are done here.

Zone 3: — This is the area where free access of non Mr personnel or ferromagnetic materials can cause serious injury or death. Patients are accepted and prepared to enter the scanner. Restrict access to zone three controlled by the MR personnel.

Zone 4: — This is the MRI scanner room itself. This zone is highly hazardous due to the strong magnetic field and hence the restricted area and should be under direct visual observation.

What is MRI Quenching?

Quenching refers to the events occur when the liquid cryogens that cool the magnet boils leading to helium escape. This is only done in cases to the events of magnetic field causing patient/ personal injury or in the case of fire or other emergencies. However the danger may still exist, since there is no total removal of the magnetic field.

First of all metals is everywhere, buckles of your belt, shoes, stuffed animals even in hospital pillow. Even if we know if something is made of wood you never know if it is tightened with a screw or a steel rod or not. Metals are an inevitable part of the modern life. Not only are metals ubiquitous ferromagnetic materials are an unavoidable part of the contemporary life.

It is remarkably difficult to distinguish safe and unsafe metals either by simply looking at it or even if you somewhat know what the metal is. As a result all metals are to be considered unsafe by MRI unless and until they are considered non magnetic. Thus, it’d be better if proper precautions are taken, to protect patients, staffs or damage to the machine itself. It is recommend ferromagnetic detection to be availed by every MRI.