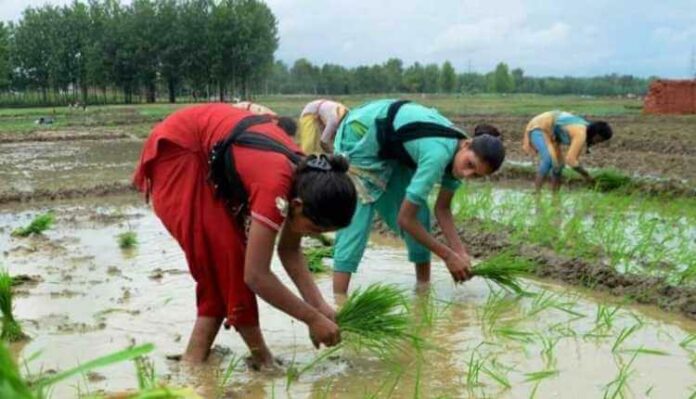 The globalized world economy is facing a new challenge in the face of COVID-19 induced lockdown. Every economy around the globe is opting for protectionism, and India is no exception. The recent announcement by Shaktikanta Das, the Governor of Reserve Bank of India (RBI) indicated that our economy is at tatters. RBI has not revealed the GDP percentage of the recent quarter but mentioned that it was in the negative trajectory.

At a time when the country has reached a standstill, and all the factories are closed, the only saviour is agriculture except for increased government expenditure. Almost 47% of our total GDP is acquired from the agricultural and related sectors. According to data available from the 2011 Agricultural census of India, close to 61.5% of 1.3 billion of Indian population is rural and dependent on agriculture. Yet the agricultural sector has long been ignored post-independence in the wave of Nehruvian industrialization.

But every time our country is faced with an economic challenge, it is the agricultural sector that has helped us pull through and stand back on our feet. Even during the previous economic crisis of 2008 economic sector was least affected and enabled us to keep up a stable growth rate. When Corona Virus hit India three months ago, India was quite comfortable in terms of food security. The Food Corporation of India (FCI) has a stockpile of 87 million metric tons of food grain which can roughly be translated into almost 100 kg of wheat or rice for each member of every family that holds a ration card. The stock can increase when the wheat-season comes to an end this year, and due to heavy post-monsoon rains of last year, we are expecting additional production of Rabi crop (the 14 crops of Kharif season including bajra, barley, jowar, ragi and all kinds of pulses).

The rural Indi is least affected by the virus outbreak, and thus agricultural sector is still functioning while urban India is under lockdown. The work in farms and fields and agricultural ‘Mandis’ requires space, and therefore, social-distancing norms are more comfortable to follow that the close clustered atmosphere of urban factories. The scope of agriculture has gone beyond providing food security. Economists have emphasized agriculture’s active role in terms of product, factors, market, and foreign exchange. Here, product refers to the supply of raw materials for the industries (e.g. Cotton, Jute) while taking in labour, which is probably the most critical contribution of this sector. The market generates and accelerates demand for industrial products like consumer goods. The factor indicates the supply of capital and labour for the non-farm sectors. Last but not least, agriculture’s contribution in terms of foreign exchange refers to the export of agricultural commodities. These ‘not so mainstream’ aspects of the agricultural economy have to be taken more seriously than ever now.

The technological boom of the 21st century has shown explicitly visible growth in almost all aspects of agriculture, namely fishery and livestock. Often their large scale impact has come to be known as ‘revolutions’ like the blue revolution in fisheries, the green revolution for crops, the white revolution in the dairy sector, etc. The labour needed for pre-harvest, harvest, and post-harvest activities, as well as the sectors which are driven by input demand for agriculture (e.g.-farm machinery, fertilizers, pesticides, etc.), is capable of boosting the economy.

Lakhs of migrant workers are returning to their native places losing jobs in cities. The mass exodus will create pressure on the agricultural sector as it would lead to an excessive supply of workforce. These new developments have thrown both challenges and opportunities at us, and it is high time to revisit the government policies and see the agricultural sector in a new light. We must understand that the workforce is an asset and not liability considering the scope of agriculture in India. The Government has to play a crucial role here to channelize the energy of the population towards the positive growth of the economy.

AUTONOMY FOR AGRICULTURE – THE NEED OF THE HOUR

Last week in a news article, our Vice President, Mr Venkaiah Naidu, commented on the situation of the farmers in India. He quoted holy Gita and said our farmers are working relentlessly on the fields throughout the year even during the pandemic without asking for the right reward. The farmers are not allowed to sell their produce. Yet, these important economic agents have been systematically denied the constitutional right to trade. This is a form of exploitation that has its roots in our colonial past like the Bengal famine of 1943, drainage of wealth from India during the Second World War and later consecutive droughts and food shortages of the 1950s-60s.

The Agricultural Produce Market Committee (APMC) Acts of the states, and The Essential Commodities Act of 1955 have tied the hands of the farmers. They are only allowed to sell their products within the designated market area and to Food Corporation of India (FCI). Due to such restrictions, farmers try to sell their produce via middlemen to gain profit from unregulated markets the profit earned from agriculture goes to middle-men and brokers before reaching the producers. There is no incentive for private corporations to invest in agri-sector because of the non-remunerative nature of farming in India. The chains around the farmers are not fruitful to any of the stakeholders. Neither is State getting extra revenue nor are the producers receiving desired profit nor are private companies finding any incentive to invest in the farm sector. This is high time our agricultural sector is given as much priority as the industrial sector and farmers are given their due.

Many experts say that the Indian economy has ‘dualistic’ features, but it is not determined if we can call India- a ‘dual economy’. In a dual economy model, both the urban industrial sector and the rural agricultural sector co-exist in a set-up of perfect and healthy competition. Historically, the dual economy models use comparative statistics of both the sector to create a competitive atmosphere and accelerate the growth rate. This economic model has been propagated by many experts like Arthur Lewis. Although India has both the sectors operating simultaneously, the non-remunerative character of farming has taken the competition away from the economic scenario of our country. Typically, in a dual economy, industrial goods and farm goods function as substitutes whereas the prices of agricultural products are determined either endogenously (by meeting the global standards of prices in open economies) or by using utility maximization method (used by closed economies thus not suitable for Indian structure). India has subsidized most of the farm goods, so the Indian agricultural sector is not ready to sustain the global competition posed by western agri-goods.

Bringing autonomy in the agricultural sector have been discussed in Nirmala Sitharaman’s five tranches revelation of 20 lakh crores economic stimulus package announced by Prime Minister Narendra Modi. On 3rd of June, union cabinet headed by the PM has passed an ordinance to amend The Essential Commodities Act of 1955, and it will be made effective immediately. The amendment aims at deregulating production as well as other aspects like storage, distribution and movement of agri-commodities. The Centre hopes by removing the fear of excessive government regulation in this sector, private and foreign investments will be attracted, and in the long run, it will help to modernize the food supply chain. Our agriculture minister Narendra Singh Tomar noted, “This is a visionary step towards the transformation of agriculture and raising farmers’ income”.

He further added, now the farmers will be able to sell their produce to whoever they want to- to any individual buyers, companies and cooperatives. The Act will also take down inter-state barriers and promote contract farming to boost the economy. This Act has stricken out commodities like potatoes, onion, edible oils, oil-seeds, pulses, cereals from the list of essential commodities but to protect consumers, and the Act leaves room for the Government to regulate during emergencies like war, natural calamity etc. This is the very first step towards freeing agricultural sector from the regulation of Government, and it is not possible to assess how the farmers will be affected by this amendment at this nascent stage. If agriculture is made remunerative at least per-capita income of the farmers would rise in the grass root levels.