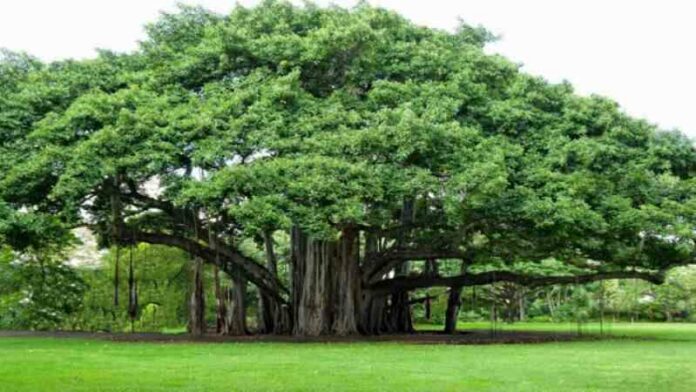 Amongst the trees, there are TWO which is considered to be the national symbol of the identity of and for the Hindus in India. However, it could be the typical traditional women of India who believe in the root culture, and its tradition of India make it a point to worship these two trees.

What is so essential for these two trees that the Indians in general and the Hindu women in particular worship the trees. Well, these two trees and its importance could be made to understand in these few lines.

Let me first start with Banyan tree One might NOT believe me but the Banyan Tree is being considered as to be the national tree of India. It is a symbol of pride and a matter of great importance for the womenfolks of India. The blessing which Maa Sitadeviji gave it to this tree along with the Pipal tree echoes all through the recitations and the mantras that these two trees hold at the time of worship and the psyche that these two trees have made especially amongst those who believe in the existing of Brahma- Vishu-Mahesh makes the duo of the botanical tree as trees which are deities and that it should NEVER be chopped off or even cut for if done the land where it is reduced. The place from where it was uprooted will never be at peace. Also being native to the area of India and originated here at India it adds to the symbol of national belief that the two trees are the replica of the trio of God that rules the universe by the Hindus.

Importance of the Banyan Tree

Known as Ficus Benghalensis in botanical term the Hindu philosophy and the root of the Hinduism which believes in tradition of Hinduism consider this tree to be very sacred as this trees was the one which provided shelter to it’s maximum when Lord Rama and his wife were at the exile in the jungle The way and the manner that this tree provided the refuge with the fruits and the shelter to Lord Rama and when Maa Sitadeviji was at Lanka in the Ashoka Vatika the shadow and the sanctuary that the tree provided to the Maa Sitadeviji and the blessing that Maa Sitadeviji gave to this tree along with eight other trees which also included the pipal tree the Banyan tree has become a symbol of the tree which provides the fulfilment of wish Beside the medicinal properties that the trees can give the tree has a longevity for over 500 years. What is so great It doe not requires water for its existence and if it is properly planted in the jungles, it helps in attracting the heavy clouds to shower the rainfall in abundance. These are the blessings that Maa Sitadeviji gave it to the trees after she was coming back to Ayodhya finishing her 14 years of exile at the jungle

Shibpur is the place at the District Howrah where the most massive Banyan tree can be seen. The tree still stands with its height at 25 metres and the canopy that covers 420 metres. It has 2500 aerial root Speaking about its existence the banyan trees are the most massive in the world, and it grows to about 25 metres at the maximum and 20 metres There are many a Banyan trees here at India at many a place at the dense jungle which has the branches of the Banyan trees spreading to an unbelievable 100 metres. They have mighty roots that can penetrate tough surfaces like concrete and even stones sometimes

The banyan tree enjoys immense cultural importance in India. The Hindus consider it to be a sacred tree and a lot of temples and shrines have been constructed under its shade. The banyan tree is commonly symbolic of eternal life as it has a very long lifespan. Hindu woman and especially those who are married and still believe in the old tradition of Hinduism, often practise the rituals under the shade of the Banyan trees. The Hindu Supreme deity Shiva is often depicted as sitting and meditating under a banyan tree surrounded by sages. The tree is also considered a symbol of the Trimurti, a confluence of the three supreme deities of the Hindu mythology – Lord Brahma is represented in the roots, Lord Vishnu is believed to be the trunk, and Lord Shiva is believed to be the branches

Providence of Strength, Vigour and Vitality

In the good olden days when there was a system and a belief of the ruler marrying more than a wife the strength to control himself for being equally a strong men in terms of the ruler to similarly be strong to everyone in terms of everything came out of the milk that the Banyan tree gave it, for the people to drink or use it as a medicine. It is still said and believed especially in the villages even now that every day one who plucks a banyan leaf and collects the milk in the Batasha a kind of a sweet and eats it every day will be as strong as steel in every manner

It is believed that this supplies the necessary vitamins in the body, makes every nerve very strong as steel, enhances the vigour and the vitality and keeps the people. It’s health very stable and robust The Rajas, and the maharajas who had a lot of wives to be controlled, especially the Rajput rulers would use this to keep themselves very strong to take on anybody. The class example was Raja Man Singh, whose sister Jodhabai was married to Akbar.

I am the Peepal tree among the trees,
Narada among the sages,


Chitraaratha among the Gandharvas,
And sage Kapila among the Siddhas.

The God Of Death, i.e. the Yamaraj is associated with the peepal tree and this tree often planted outside the village near crematoriums. The fame and the truth that this tree carries is it does not allows even a blade of grass to grow under it. It was Gautam Buddha when he renowned his Kingdom and the world that he sat under this tree and would meditate for hours together This trees because of that reason holds a special place in the lives of the Buddhist and those who floor Buddhism worship this tree They believe that this tree is the spiritual strength that Gautam Buddha has left it for the followers of Buddhism to draw the strength and inspiration from

Thus Peepal tree does not allow for any rebirth and renewal, and though it provides the shades, it does not offer food. That is why it is not part of fertility ceremonies like marriage and childbirth where food-giving, rapidly renewing, plants with short lifespans such as Banana, Mango, Coconut, Betel, Rice and even grass, are included.
In India, it is believed, and it is thought that there are two types of sacredness – one that is associated with impermanent material reality and the other which is related to permanent spiritual reality. The two fruits which fit into this kind of school’s thoughts are the Banana and the Coconut. The Peepal fits into the latter. Banana which regularly dyes itself is the symbol of flesh, and it keeps on renewing itself whereas, Peepal is the soul – which never dies and which repeats itself.

In the epic Mahabharata, there is a story of a woman called Savitri who lost her husband as destined, one year after her marriage, near a Banyan tree. The lady followed her dead husband, which was taken away by the Yamaraj, the God of Death, and through determination and intelligence, managed to secure back her husband’s life. Ever since that as a memoir of that event and as depicted in the epic, of that event, Hindu women go around the Banyan tree, tying seven strings around it. They believe that by doing this, they are securing the lives of their husband, the pillar of their household. They are protecting themselves from widowhood, which is believed by most Hindus to be the worst fate for a woman.

The usefulness of the Peepal Tree, the Scientific Aspect

The Peepal is a tree sucks water, and they are never planted or sown within the limit of the paces where either the houses are constructed, or the apartments are made. The roots spread and far & wide and are detrimental to buildings. They suck away water from plants that fix nitrogen with photosynthesis as food.

As a matter of principals, the Peepal trees are mostly planted across the roadside or even on the highways. The reason is the people who move from village to village need shade on the roadside to take some rest. In the towns or the pace where the village community meeting was always held in open ground, and they needed shade. It is in these places most where the Peepal trees are planted. It serves a pedestal for chieftains to sit.

Succour to the Female fertility Circumambulation

Of all the trees in nature, Peepal alone exhales maximum ozone (O3) during the sunshine. The absorption of ozone helps female fertility. In the olden days and even in the days of primitive India the women always would walk around the Peepal tree and sit beside it

During the evening hours. The walking around makes lung do work to take in the more and more fresh air and hence, ozone that strengthens the uterus, and the Fallopian tubes to receive sperm are also absorbed. In the new moon day, this was more seen and watched because the modern moon day helps absorb more o3 than other days due to gravitational forces.​

During the exile of Lord Rama and his wife Mata Sitadeviji this was the tree when they would sit under for rest and this tree was worshipped by Maa Sitadeviji The blessing that it got has made this tree a beneficial tree to be planted along the roadside, the highways and the jungles as it cannot be and should not be planted in the cities The reason why is cited above

It is no wonder that such a tree that is full of cultural significance and history is chosen for representing India’s highest award. The Padma’s and it’s citation has the Peepal leaves it’s made, and it’s emblem That sums up it and tells everything important about these two trees.