According to Facebook, eighty-seven million of its users had their data accessed by Cambridge Analytica. The latter is a British political data firm. It worked on Donald Trump’s 2016 election campaign. A Cambridge University Researched developed a persona quiz app on Facebook. It led to a data leak where people’s data was downloaded to be passed on to Political Analytics Firm.

In case you are one of the many wanting to see whether your data was shared, here is how to — Facebook already sent users whose data was compromised a notification about it. According to it, they have “banned the app ‘This is Your Digital Life’. “Citing the reason to be,” the app may have misused someone of your Facebook information by sharing it with a company called Cambridge Analytica. “They also said, “in most cases, the information was limited to public profile, page likes, birthday and current city.”

The main thing is: you don’t need to take the quiz to have your date shared. It took was for one of your friends to take the said quiz. 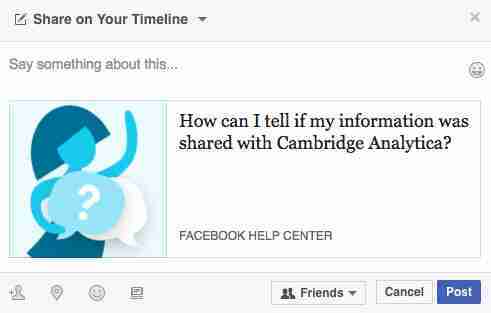 Around 87 million with a different response (“a friend of yours did log in”). That means that their public profile, page like, birthday and current city had been compromised, shared with some company. There is an option of sharing the article. With this option on Facebook, you can spread the word to help others figure out whether their personal data has been compromised or not. In case you are wondering how Facebook got into this mess, here is the story.

Between 2010 and ’15 — Facebook allowed third party apps to collect personal data from users and their friends. Upon realizing the misuse of this feature, Facebook made a move to prohibit access and updated its platform. Only it was too late. Cambridge Analytica had already collected information from Facebook.

2012- Contrary to Mark Zuckerberg’s promise to make Facebook a secure place, Facebook tweaked the design of its permission request page to make data theft less apparent. They changed ‘Allow’ ‘Don’t allow’ to simply ‘play game’. It did not necessarily communicate to users that they were paving way for data sharing. A small ‘?’ held all the information about regarding this. But honestly, who clicked on it?

2013- Aleksandr Kogan developed a quiz app using Graph API, under the disguise of ‘Global Science Research’, he hired people to take the quiz on Amazon Mechanical Turk. The site connected workers with simple jobs. Thanks to the way Facebook worked, the survey participants who consented, gave Kogan access to their friend’s and their own data.

According to Alex Stamos, the former did not break into any system. However, he did misuse the data, which, unfortunately, did not making it a (data) breach.

2014- A study about News Feed Experiment was published. It prompted wide range of outrage over privacy concerns. Users were furious about how Facebook conducted a research without consent. Facebook said that it followed its own data use policy to which all users agree before creating an account. Forbes pointed out that the clause was entered on May 2012, four months after the study.

Later the company announced its decision to do with Graph API. It limited the amount of data the third-party applications can access to while at the same time, the apps would have to get approval from Facebook for sensitive data. Until in 2015, when they finally, shut down Graph API 1.0. They created a new log screen with an ‘Edit the info you provide’ link.

2015-The Guardians reported that Ted Cruz’s presidential Campaign used ‘psychological data’ from Facebook users. Facebook had to take legal action in an attempt to get Cambridge Analytica to delete all user’s information. Kogan had sold the information to Strategic Communication Laboratories or now called, Cambridge Analytica.

Federal Trade Commission launched an inquiry into Facebook and Cambridge Analytica. They are investigating whether Facebook violated the settlement reached by the government agency in 2011 over User Privacy Protection or not. Mark Zuckerberg, CEO of Facebook, was called to testify before Congress.

Finally, breaking his silence Mark Zuckerberg announced a new tool. He said that FB would no longer allow app developers access to user data (after three years of inactivity), it would reduce information people are required to give and would audit all apps which have access to large amount of data.

In case you are worried about your Facebook data, go over to Facebook’s Setting page. Setting>Account Settings> Apps>Logged in with Facebook.

By clicking on the ‘x’, remove any third-party app you no longer use. Or using the pencil icon, edit the amount of information you share. You can also report an app.

Go to ‘Apps Others Use’ underneath the third-party app icon. Click edit to control what your friends bring with them when they enable third party apps.