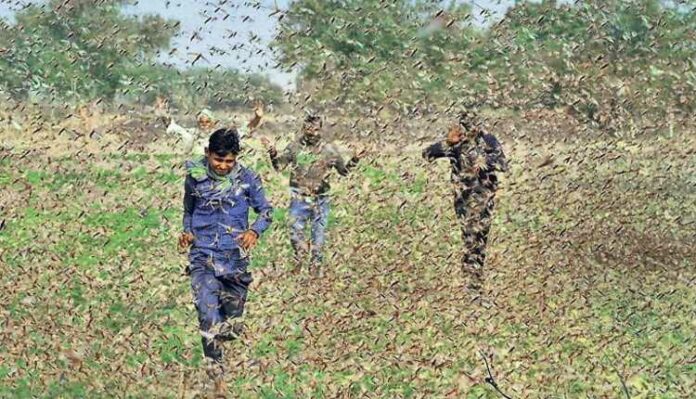 Locusts Attack, let us know these who are Locusts? Locusts are a species of grasshopper family (an insect). They are mostly in groups, They are solitary, but under certain circumstances, they become more plentiful and change their habits and behavior, and become gregarious. There is no such difference made between both Locust and grasshopper species – Locust is a species, forms swarms under intermittently under suitable conditions.

Why do we need to be scared of these small insects? Do locusts eat humans?

So what do they eat?

Locusts eat plants. They have become a problem because locusts swarm will strip an area of its vegetation, including the crops. Locusts very often live in small groups, sometimes the numbers increases, and they can do great damage to the crops. Although the young insects can’t fly, they still roam in bands, eating the crops in their path. They fly during the day, moving some km a day, and young locust rest at night in plants and shrubs. They grow and become adult locusts. Then they start in March and move with a vast swarm. A single swarm of Locust may contain ten-to-twenty thousand million locusts and cover a large area. They may travel several kilometers before they settle to breed. Locust’s swarm will devastate a great area. A large swarm can eat 160,000 tonnes of food in a day. This amount of food can feed 800,000 humans for an entire year.

Did you know, who are locusts scared of? Who can eat them? Do humans eat Locust?

The answer is yes! In Africa, African people eat locusts with honey! And Locusts can be eaten by spiders, birds, lizards, and desert foxes. The birds can also eat them; birds can eat so many that they become too heavy and have difficulty to fly off.

It is believed that Locust is dangerous for any nation because if a small locust swarm can eat the same amount of food in one day as about 35,000 humans. It is posing devastating harm to crops and food. The desert locust is potentially the more dangerous of the locust pests because they can fly rapidly across great distances. Locust has two to five generations per year.

They entered India through the western state of Rajasthan on May 13, 2020, and then Union Environment Ministry warned that the locust swarms have entered in Rajasthan, Madhya Pradesh, Punjab, and Haryana. The swarms have entered Uttar Pradesh deeper, and three states Madhya Pradesh, Uttar Pradesh, and Rajasthan have sent drones, tractors, and other vehicles to kill them with the help of pesticides. Apart from this, these insects have damaged the crops in Gujarat and Maharashtra; also, and the Government has issued the warning in 12 states. These Locusts swarms were responsible for crop infestation in 2, 80,000 hectares across 13 countries before they arrived in India.

After 26 years of long gap, last year also, Locust entered some part of India, but they were mature locusts who did less harm to crops. But this year the locusts which have arrived are immature, they are not fully grown Locust they are about 10- 12 days old, they have the capacity to cause more harm to crops, these locusts can fly huge distance in search of food, Immature Locusts have a longer lifespan compared to an adult one.

In ancient times, people could do less to save their crops from being harmed by locusts, and In early 20th century, efforts were made by people to stop the development of these insects by cultivating the soil where eggs were laid of them, catching hoppers with catching machines, killing them, trapping these insects in ditches, and crushing them with the help of rollers and many other mechanical methods were used. Early when locust control was needed, the insects were targeted by applying water-based pesticides, the tractor-based spray was used. This was slow but effective, spraying concentrated pesticides from aircraft over the insects was the solution.

Now modern technologies are used for controlling these insects, include GPS, GIS tools, and satellite imagery, and computers provide instant data and analysis.

K.L. Gurjar, the deputy director of India’s Locust Warning Organization, says: – “This time the attack is by the young locusts that can fly more kilometers than adult locusts they were not so fast nor harmful.”

But we can’t sit and let these insects damage. What can we do? How can we save crops? How can we stop these locusts from eating our crops?

Farmers tried to drive away these locusts by lighting fires. They dug up there eggs. Now crops can be sprayed with pesticides from drones, vehicles or airplanes, and Pesticides are given through water. Scientists are trying hard to improve the control of locusts by preventing and dispersing locust swarms. Farmers and scientists also connected and tried to predict when these swarm will appear, so that plan of controls can be introduced earlier. Fungal pathogens can be used to control grasshoppers and locusts, and this is called biological control. The fungal pathogens can be sprayed on the locusts. Locusts can be attacked by parasites that develop inside the locusts and their eggs.

These are some tips which can be used to save the crops from these locust swarms:-