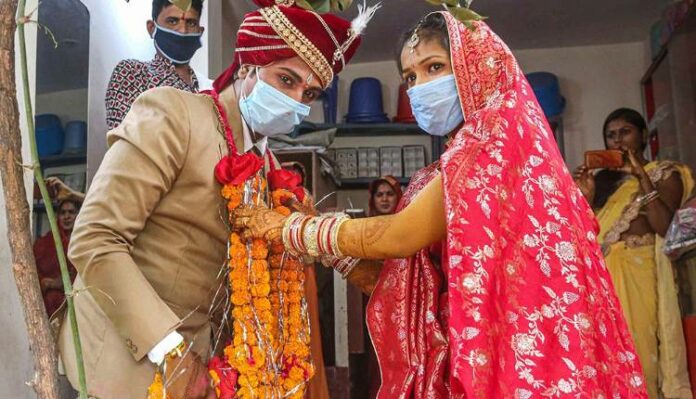 According to facts, there are roughly 10 million weddings projected in India each year. While the Coronavirus outburst spoiled many plans of couples in urban areas, who hoped for their wedlock, on the other hand, an increase in the number of weddings could be seen in rural areas during the lockdown.

Lockdown has been disadvantageous for the country in many aspects but proved to be advantageous for marriages in rural areas. Here is a brief idea of why internally planned marriages have taken place in a rush since the pandemic.

At the beginning of the pandemic, there was a huge uncertainty for the rural families regarding what step to take next. At the same time, lakhs of people migrated from cities to their native villages. The entire world was slowly coming to a halt. As the public got habitual of it, families in rural areas realized the potential of the timing to get their sons and daughters married.

A marriage ceremony is about the community approval of the union of a man and a woman. Society is reluctant, insecure to give free will to two individuals to begin a family without their approvals.

The reason for a lockdown is to avoid social gatherings. In simple words, marriage involves social gatherings in a huge number and is required to be done traditionally. However, we have a law where court marriages could be done but rarely used because of the need for a ceremony to be performed.

A disadvantage of a marriage ceremony for rural families is the need to give out invitations for several people that add to the costs incurred on these occasions. According to experience, rural families have to set a budget of at least Rs 50,000 – Rs 1,00,000 only for the event to occur, which is a big amount for most of which are based on loans.

Lockdown brought in the rule of having not more than 50 people gathered in the ceremony, which proved beneficial as most marriages could be done with close family members. The invitation limited to the groom’s family and the bride’s family, saving pressurized costs. This led to an increase in marriages.

The marriages in rural areas are simple and have their goals set to limited guests, limited catering services. Their expenses are lesser compared to urban marriages. Parents decide 95% of marriages in rural areas, and the children mostly have no say in it. During the lockdown, most marriages that occurred were child marriages. In villages, a family that consists of 5 daughters more or less can be witnessed more. Due to the pressured thought of their marriages, it is likely for the parents not to miss an opportunity like this.

As the number of arranged marriages is more in rural areas, the marriage parties work upon certain agreements to accept the bride. These agreements lead their way to the dowry system. Since costs were saved in marriages during the lockdown, the bride’s family found comfort in providing dowry on a satisfactory level.

So lockdown is advantageous in breaking the convention of the old system of marriage where a large gathering was an accepted norm. Today it could be seen as a change as a new form of marriage could be attempted where a simple approval from a temple or a court or family or a group is enough, which helps remove the huge burden of the costs incurred from the parent’s shoulder. This could also be an advantage in ending the perception of parents looking at their female children as a costly burden.

Marriages during lockdown increased in the rural areas due to families’ economic conditions, many of whom lost their jobs during the pandemic. Lockdown restrictions were a golden opportunity for them, leading to an increase in child marriages, with their educations too coming to a halt with all the schools closed. When the lockdown was imposed, and restraints were put in, it was believed that weddings would come to a halt. Instead, wedlocks were internally planned and taken place without the knowledge of many people.

Due to this desperation of getting daughters married as soon as possible, and also to avoid dowry and to spend as little as possible, child marriages within a family that is marriages among relatives, polygamy, were witnessed, which shows the position of India’s development where poverty brings desperation into helpless people’s lives.