Mitosis and Meiosis and how do they impact humans? 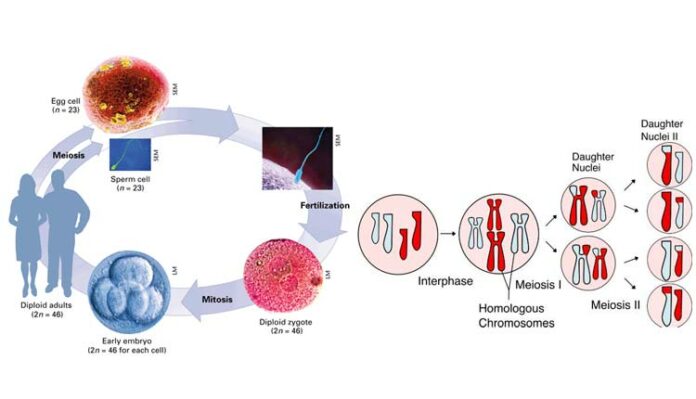 The two types of cell division are called mitosis and Meiosis. Both these processes are quintessential for humans. But often, people are unaware of what these processes constitute, how they work, and their specific impacts on our body. So, here I present the basic lines of differences between them and an outline of their overall work. 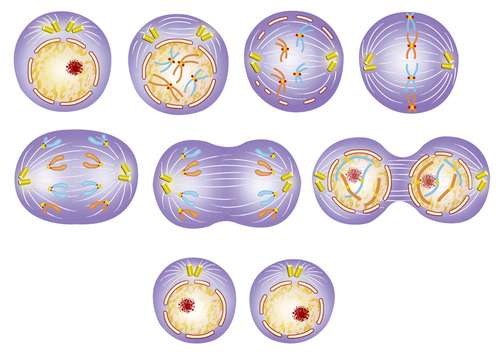 Mitosis is also known as equational division because, in this process, a cell divides to give rise to two daughter cells. This process takes place for the growth and regeneration of worn-out cells and the general growth of the body.

In this process, the overall genetic composition of the parent and the daughter cells remains the same. This basically means that the total number of chromosomes remains the same or unaltered, diploid or 2n.

During this process, the chromosomes duplicate or replicate themselves and then condense; these replicated chromosomes are pulled apart using K-fibers. This way, the replicated chromosomes are separated from each other. But only replication and division wouldn’t suffice. Therefore, for the creation of an individual cell, division of the cell is also needed. Therefore, cytokinesis or division of the cytoplasm and the cell membrane follows and finally leads to creating two individual daughter cells.

During the animal cell division or the cell cycle, different stages of mitosis are constituents of the M phase of the mitotic phase. But what specifically are these ‘other stages of mitosis’.

Namely, these processes are Prophase, Prometaphase, Metaphase, Anaphase and Telophase. Let’s peek a little deeper into each of these processes for a generalized understanding of the entire process.

Prophase is the first stage of mitosis in animal cells but the second stage in animal cells. Before this, interphase occurs because of which the chromosomes are already replicated. So, in this process, condensation of chromatin to chromosomes occurs.

The chromosomes line up along the centre of the cell, and then from the opposite sides of the cell; these are pulled apart. This occurs because of the pulling by the two opposing kinetochore microtubules.

Finally, the chromosomes split up completely and are pulled to the two poles of the cell.

In this phase, all the changes during the cell cycle are reversed. Nucleolus reappears, chromosomes decondensed and form chromatin fibres.

But, like all other biological processes, mitosis is also not devoid of errors. Sometimes, instead of two daughter cells, three or more cells can also be produced. This is called tripolar mitosis and multipolar mitosis, respectively. 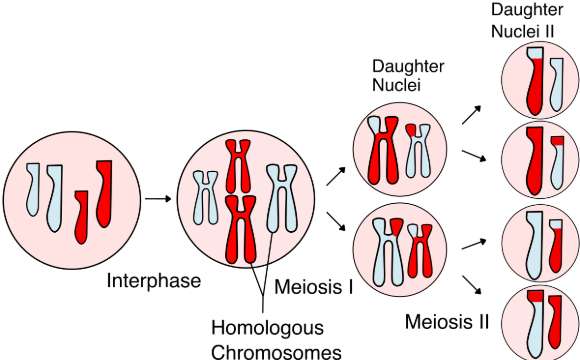 But the major difference here is that, unlike mitosis, not just 2 but 4 daughter cells are produced. This is especially beneficially for processes like reproduction. Therefore, such cells are the reproductive cells or the sex cells (gametes), sperms in males and egg cells in females.

As the number of daughter cells produced is double that produced during mitosis, there are two stages involved. These are generally referred to as meiosis-I and meiosis-II. Interphase is obviously common in both mitosis and Meiosis.

In this process, crossing over chromosomes occurs, resulting in recombinant chromosomes responsible for variations among the daughter cells. Then again here as all the processes are practically the same as mentioned in mitosis, now metaphase -I take place wherein again all the cells are arranged in a file in the centre of the cell but here, the difference here is that they are arranged in pairs. Then again, in anaphase, these chromosomes are pulled away.

Further, in telophase -I, two new nuclei are formed, followed by cytokinesis, but now the process doesn’t end here. Again, the same process is repeated in the same manner as prophase-II, metaphase-II and so on. Still, with little variations like in metaphase-I, cells are again placed in a file, but this time the chromatid sisters are separated.

Therefore, these processes might look a little complicated but are essential for life processes like growth, regeneration and reproduction.