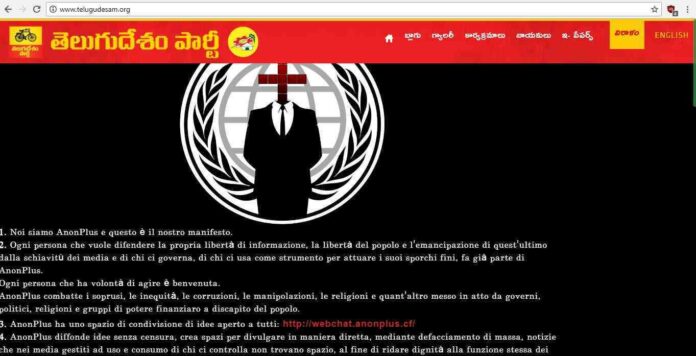 The official website of Telugu Desam Party (TDP) telugudesam.org has been hacked on 26th May 2018 by someone namely Anonplus italia.

The anonymous hacker has left a message on the homepage of the Telugu Desam Party’s official website stating about the vulnerabilities in the website.

This group of anonymous hackers claims to only hack the website without stealing any sensitive information and their purpose of these hacks is to inform the website owners about the vulnerabilities in their website so that they can work on it and improve the security of the website.

The message left on the website was in Italian which indicates an Italian hacker or the group hackers were involved though it is the matter of investigation and the IP logs should be analysed carefully to find the actual location of the hacker.

@naralokesh @ncbn Dear sir, we have state of the art #APCSOC but still we are not able to safe guard our websites from global hackers. FYI TDP official website hacked by someone(Anonplus italia). Hope this will be fixed at least now. pic.twitter.com/hkxHiO7IFS

Website hacking is getting very common in India be it government owned website or the website managed and operated by the known technology Gurus of India where the websites are getting hacked on the regular basis. Recently, the website of one of the known YouTuber and self-proclaimed technology Guru coined as Technical Guruji was compromised and since then his official website is under constructions.