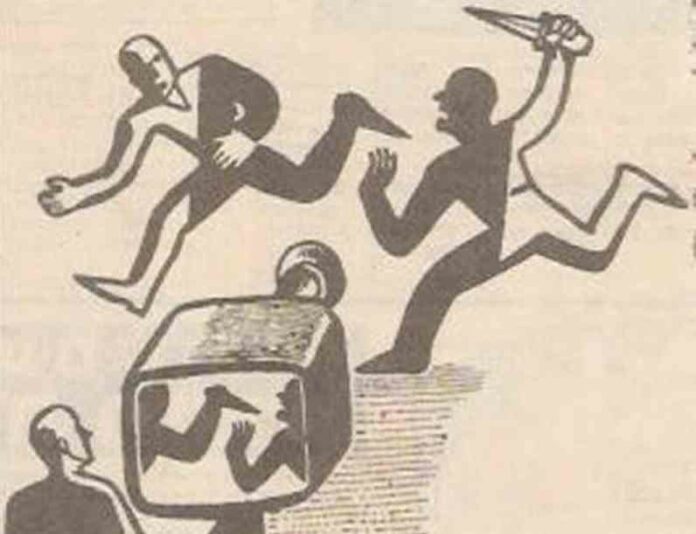 Indian Media TRP or News – Since the beginning of Indian media It’s changed a lot of peoples mindset. One has to admit that media is something which can change society drastically but nowadays, it is becoming a TRP war between 2 or more news channels. Once there was only Doordarshan, which was the Only News channel, but since then the development of Indian media rather Degradation of Indian media is a major issue for the Democracy.

There are more than 30 news channels in India in various languages, but one can’t perceive any difference between those channels. Nowadays there are vast ways to explore news, for instance, Television, Social Media, Radio and News Papers. One of the major problem of Indian Media in the past 15 years or so is spreading a Headline which sometimes is not as big as they illustrate those, because Of their TRP (Telecasting Television rating points) race with other channels they seem to make a news headline which they want to sad to admit that Indian media has forgotten the Ethics of Journalism Nowadays.

The problem of Indian media lies in the news they are producing, and the debate shows they are hosting are absolutely rubbish, and the topics of the debate show are only politics and politics where are those debates about Malnutrition, Education, Economy, Rural Livelihood, Child Labour. Media is known as one of the pillars of Democracy. The importance of this fact can’t be stressed more. Even when Democracy was absent in India during the colonial rule, the media played an important role in keeping people informed and in mobilising the masses towards a common cause of independence.

However, nowadays, Indian media is busy producing trends such as anti-national, Deshdrohi, the Tukde-Tukde gang. Media is playing with Indian peoples mind for instance when the Pulwama attack happened media was crying for war like a child and for their TRP race they covered this terror attack more than 30 days without any specific news which is ridiculous. But there are some bright spots found in Social Media. They serve as a platform to read about different perspectives. Also, the prevalence of blogging, Facebook and Twitter have given rise to citizen journalism wherein even a common man has an option to report, criticise and comment on topics.

This has made the traditional media more accountable about what they broadcast. Any hypocrisy, prejudice or bias shown in their reporting immediately gets mocked and shamed on the Social Media. Example: the Indian cricket fans used the#ShameOnTimesNow hashtag to slam Times Now channel for sensationalising Team India’s defeat at the previous World-Cup.

Although there are some major problems about the Indian media which needs to be solved immediately, such as:

The guests speak anything and everything related to the topic or not, whenever they get a chance, and the host is someone who can shout their lungs out. Media homes should realise that also, a huge percentage of people follow news channels for their daily dose of opinion-formation.

It is sad to say but India is fulfilled with Corruption and there is only way that people can give their voice their opinion which is through the media although nowadays we have got lots of opportunities for giving our opinion Indian News channels is still our first choice for Searching for Opinion and finding the authentic news, therefore, Indian Media needs to be Pure in terms of Producing News and Debates but seems like it’s all becomings Business of TRP.

One has to admit that nowadays, media channels seems like crying for one political party to another, and they are totally disrespecting the ethics of journalism. Nowadays, their main aspect is protecting the ruling party, which leads to the blindness of the Indian peoples. Media is forgetting the fact that they have a power which can do wonders for the country with the collaboration of Indian citizens.

The TRP race between two or more media has started since the 26/11 terror attack, and from then to now it’s becoming a business rather than news. News channels seem to believe in negativity and hatred and mould the facts in the name of religion and politics to trigger the common man. There are many incidents where media is creating fake news for instance during a horrendous rape case, if a media house and social media first and foremost, try to find out the religion of the rapist, and then the media trial begins based on.

Which ideology has that specific media house been antecedently sold to?

How is this news? Sad to concede the fact that media is becoming an enemy of peace and enemy of secularism, they are growing as a potent weapon of conflict. There are some channels as well where there is nothing important news without Bollywood and glamour in that case they are not only disrespecting the lifestyle of the celebrities but also faking the news about them which is absolutely ludicrous.

Every country has its own issues, and the elected representatives and government are elected to hold them accountable for the policies and their implementation. Media has an important role in holding the elected governments accountable for their promises and responsibilities by highlighting lapses in governance and policy implementation for that case one has to admit that this 2019 general election was not fought on the basis of development or on the achievement of the governments from 2014-2019 but, it was fought on nationalism, anti-nationalism, surgical strikes, etc. Undesirable terms like anti-national, Deshdrohi, the Tukde-Tukde gang is the result of such media trials. So What is at the root of this? Is it the fault of a few anchors? Is There Anything Wrong in our country as a society?

Are we have a tendency to incapable of manufacturing and appreciating smart news programming?

Actually, it’s abundant to try and do with the Business model of India As per the TRAI tariff order of 2016, the price ceiling for a news channel is ₹5 per month. In distinction, the worth ceiling for a general amusement channel is ₹12 per month. In theory, the general entertainment channel could be re-running old soaps (cost of content: zero).
The news channel would be needed to generate contemporary content perpetually.

Even so, the previous is allowed to charge quite double what the latter is in a position to. Besides a general amusement channel is usually possible to urge a lot of subscribers. So it is a double hit for anybody seeking to build a serious news channel. This latest addition of price tag has simply hurt the Indian news channel owners, and they have literally given up and decided to take the route of reality TV.

Today, with the sheer volume of free – often dubious and typically outright faux – content accessible online, one wonders if the News Channels will ever be reclaimed In India.