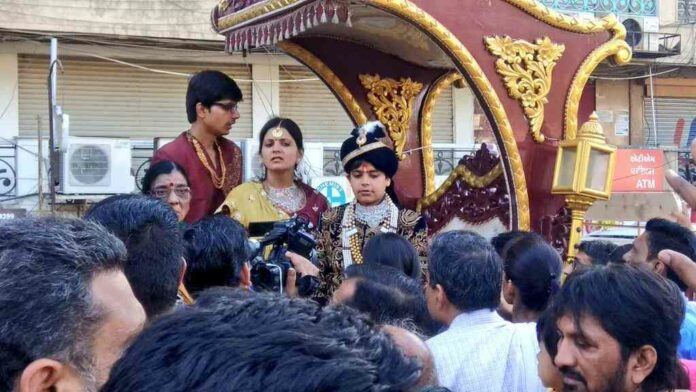 Renunciation is a sacred step in renouncing the materialistic life for salvation. It is a virtue of spiritual strength in approaching God to attain liberty from the crowd of luxurious comfort into the beauty of ascetic living.

The trend of Renunciation observed among the Teens in modern age is quite fascinating. Their behaviour pattern in renouncing the old habit is dynamic. They swap from one material life to another with the sudden change in technology during the passage of time. Their pattern of Renunciation is not religious. The spirit of salvation is missing within them.

The modern teenager is living under the cover of time and space. They are the nucleus of modern civilisation. They are conscious about their living standard rather than renouncing the world. Improving living standard along with the religious practices is the core of human civilisation. The inner meaning of renunciation where one undergoes severe penance to abandon the luxurious comfort in search of salvation, seldom gives opportunity to them to look for mental peace due to time constraint and mental space. Their memory is filled with the innovation of science and technology which lures them to navigate their mind around a huge space of desire. Their desire is unending and infinite. The pleasure for desire is more optimistic rather than defining a concrete path for salvation. It is a natural phenomenon that teenagers’ immaturity state of mind penetrates into the worldly things irrespective of the consequences in future life. Their infinite desire revolves around the renunciation graph of changing from one pleasure unit to another and is found to be never satisfied. Satisfaction is temporary and dynamic. Each satisfaction derived from pleasure through worldly affairs is not the path to salvation.

In the philosophy of religion, renunciation is the practice of maintaining austerity and pure devotion in daily life to find salvation or freedom from the worldly things. It has the power of eradicating misery, face any eventuality, reveal the true nature of living things and destroy the darkness. Religion and morality emanated from the virtue of Renunciation. The accolades of Vedanta and other works of Hindu philosophy are testimony to the emergence of Renunciation. Immortality can be achieved through the practice of renunciation. However, it is a difficult terrain in modern life, but this can be achieved as we have witnessed few monks deserting their livelihood in favour of salvation.

Teenagers have to adopt modern life as a part of their salvation. The virtue of Renunciation paving the way to reality or immortality is a vague symbol to them. Their conflict lies in the understanding of conscience which is endowed with the fascination of modern resources that never allows them to desert and usher into the spiritual art of living. It is a paradox for them to balance the spiritual entity along with their ongoing living standard. Nevertheless, they always weigh the material world more than the spiritual way of life. It has become tough for them to visualise the amplitude of spiritual life within the realm of fascinating world. The joy of living lies in their vest for desire. The real enjoyment of life can be obtained where one thinks about others rather than self. It is a very basis of true life. Every moment of happiness comes when the mind is without fear.

Renunciation is the only self respect identity which can be realised in an ideal society. Teenagers self respect ideology portrays the glamour of their physical and dressing code in order to achieve high position in the society. Smart culture is slowly building up in their ethos to renounce the world. The artifacts of religion connotation are hidden from the true meaning of life.

Self love is the domain of Renunciation. In order to have high ideals in life, an individual should have the confidence to love himself before stepping into the painful venture of salvation. In modern society, Teenager has the aspect of self love but to the extent of selfie images captured through lenses and not through deliverance.

Self realisation is an output of human consciousness. It decodes the intrinsic value of inner self and depicts the explicit outcome of highest achievement. It comes through regular meditation. Today’s teenagers are familiar with the word meditation which is taught at home and in school or colleges. They do not apply this in their daily life, thereby missing the real virtue of life. Again, the constraint of time and space act as a shield in their attainment of self realisation owing to city life and limited space. However, in this respect leisure time is spent across the surfing of internet and browsing web rather than relaxing human mind through meditation to strengthen their mental horizon. As a result, they are eluding the stanza of focusing on particular matter to leverage themselves to a better world and navigating through unwanted desire for a hefty satisfaction. Lack of meditation is causing them to lose judgement. Such a phenomena have repercussions in the society. Every teenager is subjected to spend time on surfing and browsing which eventually leading to dislocation from the social stigma and draining human relationship away to a nuclear zone where the communication become a closed dome. Social networking sites are not the ultimate forum to exchange ideas . It is a way of bringing isolated individual to a single platform. While self realisation can be used to bring together the lost soul in its proximity to achieve harmony in nature and perpetuate happiness to all. It has a tremendous effect when a group of like minded humans sit together and rock their brain in understanding the fruit of self realisation.

According to Swami Vivekananda, Renunciation is the subject of highest ideal illuminated in the teachings of Vedanta, a text of Hindu Philosophy describing speculation and ideas emerging from Upanishads. It is the sanctum of inner peace, tremendous purity of thought and mind, secret of spirituality that defines the ultimate goal to achieve enlightenment despite the burgeoning rise in the noise of daily chores. Given such preposition of Renunciation, the Teenager can best choose the alternative path to salvation from the madding crowd of time and space by giving a serious thought to the beauty of life.

To conclude, a fascination world with an ocean of ideas and speculation can enlighten the teenagers to deal with the dual element of salvation and worldly things to propagate their living standard in the rapidly changing economy.