Why Armenia and Azerbaijan are fighting? 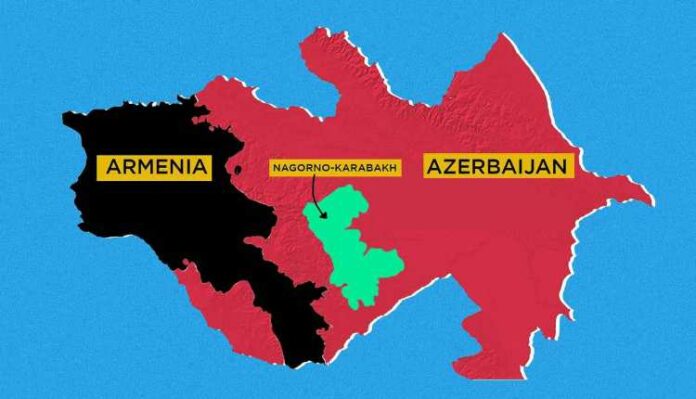 The dispute between the two countries, which broke away from the former Soviet Union, has lasted for three decades. Hence Armenia and Azerbaijan conflict is an age-old conflict.

At a time when the whole world is grappling with the Corona crisis, war has broken out between Armenia and Azerbaijan, two former Soviet republics. Several people from both countries have been killed in the armed clashes that began before some days.

The attack was launched by the Azerbaijani army and invaded Armenia in a region called Nagorno-Karabakh.

Nagorno-Karabakh is a disputed area bordering Azerbaijan and is considered part of Azerbaijan internationally. However, after the 1994 war, the region was under Armenian control. The majority of the population is Armenian and has been independent since the beginning of the 1988 Karabakh movement.

However, the Nagorno-Karabakh Republic has not yet received international recognition. Currently, the two countries are accusing each other of inciting war. However, it is not a new thing to blame each other for firing the first shot in the decades-long controversy.

Armenia and Azerbaijan, former members of the Soviet Union, have been at loggerheads over Nagorno-Karabakh since the late 1980s and early 1990s. At that time, the two countries also declared a ceasefire, but even then, the two countries could not agree on a peace agreement.

The mountainous region of the Caucasus in southeastern Europe is considered strategically important. Muslim and Christian powers have been vying for control of the region for centuries.

When the Soviet Union was formed in the 1980s, Armenia and Azerbaijan merged. The majority of Nagorno-Karabakh’s population is Armenian, but Soviet officials ceded it to Azerbaijan.

For decades after that, the people of Nagorno-Karabakh demanded that their territory be ceded to Armenia. But the real controversy began with the dissolution of the Soviet Union in the 1980s. The parliament of Nagorno-Karabakh officially voted to join Armenia.

Azerbaijan then made strenuous efforts to put an end to the separatist movement that had begun there, but the movement continued because of Armenia’s support. The result was that the conflict escalated day by day, and after independence from the Soviet Union, a formal war broke out between the two countries. The conflict displaced millions. There were also reports of widespread genocide from both sides. In the 19th century, Russia mediated a ceasefire between the two countries, but Armenia annexed Nagorno-Karabakh.

Nagorno-Karabakh, so to speak, remained the territory of Azerbaijan but was ruled by separatists and they declared the region a republic. There was an Armenian-backed government, and some Armenian communities joined in. After Russia’s intervention, the Nagorno-Karabakh region became the line of contact for Armenia and Azerbaijan.

Peace talks are underway under the auspices of the Organization for Security and Cooperation in Europe (OSCE) Minsk Group, led by France, Russia, and the United States, but no agreement has been reached.

In 2016, there was a bloody conflict between the two countries in Nagorno-Karabakh in which 200 people were killed. The conflict also erupted in July this year, in which 16 people were killed; this was followed by widespread demonstrations in Azerbaijan demanding the recapture of Nagorno-Karabakh. So, Armenia vs Azerbaijan war has resulted in remarkable damage to both the countries. Also, the Armenia and Azerbaijan conflict has impacted the world in this COVID pandemic!

Azerbaijan is home to a large number of people of Turkic descent. Turkey, a NATO member, recognised Azerbaijan as an independent state in 1991. The then President of Azerbaijan declared Turkey and Azerbaijan as one nation.

Armenia also has a Russian military base, and both countries are members of the Collective Security Treaty Organization. However, Russian President Vladimir Putin also has cordial relations with Azerbaijan. That is why Russia has called for a ceasefire between the two countries.

It is not that there has been no attempt to reach an agreement between Armenia and Azerbaijan. In 2018, there were peaceful protests against Armenia’s long-ruling Sherz Sargsyan, and in the ensuing election, Nicole Pashinyan, who led the protests, became prime minister.

Pashinyan and Azerbaijani President Ilham Aliyev then agreed to reduce border tensions and launch a military hotline between the two countries. In 2019, the two countries issued a statement calling for peace in the region. But no progress has been made in that direction yet.

According to experts, if the dispute is not resolved, Turkey, Russia, and Iran could also be involved in the war. Gas and crude oil pipelines pass through the area, which is why all countries are interested in bringing peace to the region. Armenia has even accused Turkey of attacking it.

Turkey, however, has denied Armenia’s allegations. But Turkey has pushed Azerbaijan to move forward in the region. Turkey has said it and Azerbaijan are forever on the one-nation theory. Turkey, on the other hand, has urged Armenia to evacuate the Nagorno-Karabakh region immediately.

Iran shares borders with both countries. Meanwhile, there are reports that Pakistan is helping Azerbaijan in the Armenian–Azerbaijani war. Pakistan has reportedly sent militants in addition to military aid to fight on behalf of Azerbaijan.