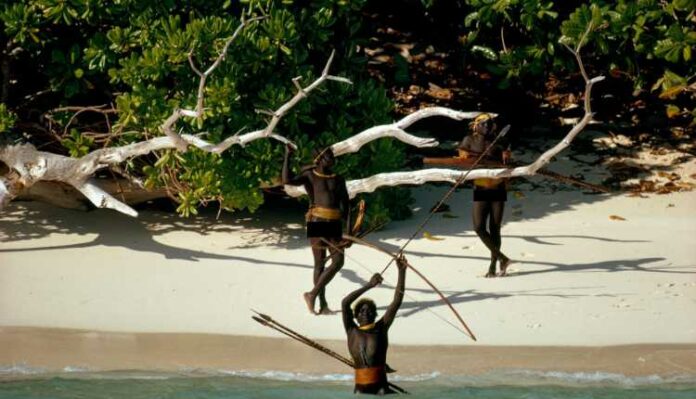 Our country, India never seems to stop amusing us with everything it has to offer. From the beautiful Southern Blue Peninsula to the Luscious Green Mountains and Snow-Capped Peaks, and not to forget the long stretch Thar Desert. Our country is definitely serving to be one of a kind, and its most immense wealth would be the mother nature’s beauty, but this is not all that India has to surprise us with. One of the hidden treasures of our country is that it is home to the world’s most isolated Stone Age tribe — the Sentinelese. The isolated tribals are the inhabitants of a small yet densely covered thick vegetation island called ‘the North Sentinel Island’ situated in one of the Andaman and Nicobar Islands in the Bay of Bengal.

The Sentinelese have been dwelling on the island for more than 60,000 years and are believed to be the descendants of the people who migrated out of Africa thousands of years ago. The tribe currently consists of approximately 50-200 people, though there speculations that it might go up to 400 inhabitants. The entire island is untouched by modern civilisation and is not concerned about the events of the outside world. Their lifestyle is much like those of our ancient ancestors had around hundreds and thousands of years ago and have been leading the hunters, and gatherers life for their survival. With time, they have learned to be self-sufficient and look after their needs. They are perfectly happy amongst themselves being isolated and secluded from the rest of the world.

There is evidence of several efforts that were made in the past years to form some contact with the Sentinelese, but only a few attempts proved to be successful while most of them failed and even led to some unfortunate events. They have been strenuously rejecting every effort that the rest of the world is putting to befriend them. It’s very risky because they would even attack and harm whoever would come near their territory or their kinds. The Sentinelese men carry all sorts of handmade spears, arrows, and bows as their weapons for protecting them from the intruders.

Since the late 1960s, the Government of India has made numerous plans and send occasionally exploratory expeditions to the North Sentinel Islands for being able to form a means of communication between the mainland Indians and the Sentinelese. The expedition team included professional anthropologists and the fishermen of the nearby islands. They made attempts to win over the trust of the tribal by gifting them coconuts. However, most of the times, the Sentinelese would not show up or be inhospitable. They would hide behind the deep jungle observe the outsiders.

In the very first expedition, an anthropologist who was a part of it informed that when they entered the island and moved towards the deep jungles, they saw around 18-20 huts and fire and cooked fishes and fruits. Sadly, none of the Sentinelese came out from the hiding, so the team had to leave the island. That was the last time any outsider came out of the island alive.

In 1991, the first-ever friendly encounter was experienced between the Sentinelese and the Mainlanders. The Sentinelese are genuinely fond of coconuts and value and treasure them since they are no coconut trees on their island. Their love for the coconuts compelled them to come to shore and receive tons of bags filled with coconuts that the Mainlanders brought for them from their hands. They allowed the outsiders to drop by the gifts, but made objections and resisted when anyone tried to enter their territory.

The Sentinelese were seen as very dark-skinned humans who wore no clothes to cover themselves. They had fibre strings tied around their waists, necks, and heads as necklaces, headbands and waist belts. There were men, women, and children of all ages. Some women were even pregnant.

Unfortunately, that friendly encounter turned out to be the last trip outsiders could take to the isolated island. The Sentinelese are no more welcoming and have closed all the doors to their openness to maintain any relationship with anyone outside their clan. From one of the previous expedition, an anthropologist informed that the Sentinelese are not really hostile. They prefer to give a warning first rather than directly killing anyone. They also do not attack or raid any neighbouring islands of the native tribes such as the Jarawa tribe, the Onge tribe, the Shompen and the Nicobarese. All they want is to be left alone and no one to intrude their habitat. However, if someone does not respect their warning and start rebelling and invading their territory, the Sentinelese can turn to be really hostile towards them and take their lives.

The government of India has taken significant decision to enforce certain laws for the protection of the tribe’s privacy. Sadly, the previous attempts to improve the bonds with the tribals did not end in good terms for both sides, causing some severe damages to the lives of the people as well. The Andaman and Nicobar Islands Protection of Aboriginal Tribes Act of 1956 prohibits travel to the North Sentinel Island, and it is illegal for anyone to go near the island and has to stay away at least 9.26 km from the shore of the island. Anyone who would trespass the area would be prosecuted. The Indian Navy heavily patrols the protected area. Only a few domestic flights fly over the island, but it has its own risk since there have been incidents where the tribals attacked helicopters and air crafts with bows and arrows. The decision to enforce laws by the Government was taken for the betterment of the Sentinelese. After all, they are prone to contracting diseases because they have no immunity to even common diseases such as flu, measles, as they have never come in contact with them.

In a sad event of the 1880s, some British officers trespassed the island and abducted an elderly couple and four children who were too slow to run away and hide themselves from the outsiders. They were taken to Port Blair to conduct some scientific lab experiments. However, the elderly couple could not adapt to the foreign environment and succumbed to various diseases they might have possibly got. The remaining four children were sent back to the island with gifts, but no one knows what impact their arrival had on the rest of the islanders. Since this event, the islanders have become more hostile towards the outsiders.

The government understood that if no restrictions would be made, the entire tribe could be wiped out by the diseases and sickness to which their immunity is zero. After the Indian Ocean Tsunami in 2004, the government officials made two distance visits to check the possible damage the Tsunami would have done to the island and the Sentinelese. Luckily, they found that islanders were perfectly in good health and were not suffering in any way. The Indian government made occasional distance visits to look after the well-being of the Sentinelese.

Nonetheless, fishers do not seem to abide by the laws that the government have listed for them to follow. In 2006, two Indian fishermen were killed when their boat accidentally drifted too close to the shore of the North Sentinel Island while they were asleep. They are believed to have gone near the island for illegally fishing and catching turtles and lobsters. The fellow fishermen tried to warn them about their boat being too close to the island, but they did not understand the warning and were regrettably attached and killed. The Indian government failed to retrieve the body.

In another unfortunate event, American Missionary and tourist John Chau were reportedly killed by the Sentinelese as he tried several times to get inside the restricted area. He made the trip to the island to preach about Christianity and his love for God to the islanders in 2018. But this ended badly for him. Seven people, including the fishermen who illegally took him there were arrested. Again, the government could not retrieve his body as they strictly declined to send anyone there to get the body. John’s body was probably buried by the tribal under the sand.

Our country, India, should take pride in being the home to the world’s last stone-age tribe which has very far difference as compared to the Folk Culture in the Contemporary Society. Every necessary action must be taken to protect and preserve their culture.

Few Facts About the Sentinelese: