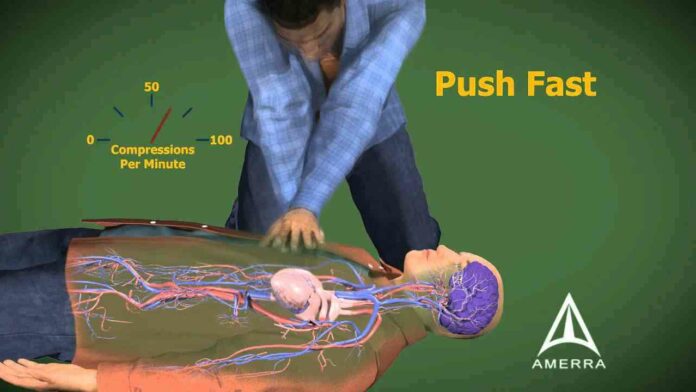 CPR or better known as Cardiopulmonary Resuscitation is a life saving emergency technique that is used to save a person’s life when the blood flow to the body has stopped or the person has stopped breathing. CPR is a basic emergency procedure, but most important of all the medical techniques. It is most commonly used in cases when the heart has stopped working (cardiac arrest), near drowning, drug reactions or overdose, electric shocks, neurologic disease or any kind of trauma. In newborn and infants it can be a life savior when there is sudden respiratory (breathing) failure due to sudden infant distress syndrome or severe chocking.

It helps in reviving the blood circulation and breathing and provides oxygen to the heart, brain and other vital organs of the body. If oxygen doesn’t reach the brain cells, brain can die in less than 8-10 minutes so, you now know how much important is proper blood supply to each and every organ of our body.

However, trained professionals and advanced cardiac life support measures might not be available everywhere and every time and the mishap can happen anywhere with any person, hence, people should have a basic knowledge about it so that the affected person gets immediate and timely help before appropriate medical help arrives.

CPR consists of chest compressions and rescue breathing which if given appropriately can greatly increase the chances of survival of the victim. It has two versions:

Step by step guide for CPR

CPR should be done only when the victim is unconscious and has stopped breathing or not breathing normally. Before starting CPR first and the foremost thing is to check whether the victim is responding to your call or not. Call out aloud “are you okay?” or shake the victim’s shoulder. In case of an infant, tap the foot and check for responsiveness. If the victim is not responding immediately call for the medical emergency number of your respective locality and start doing CPR.

Earlier, according to the guidelines given by American Heart Association (AHA) rescue breaths were performed earlier than chest compressions. However many rescuers hesitated to perform mouth to mouth rescue breaths on the victim and so this lessened the chances of providing complete emergency medical relief to the patient. As we know that time is extremely critical in such patients because each minute when the victim goes without CPR his/her chance of survival decreases by 10%. Hence, it was then postulated by AHA that chest compressions (C) should be performed first followed by airway maintenance(A) and mouth to mouth rescue breaths(B) {C-A-B rather than A-B-C}. This update drastically increased the success rate of CPR and also the survival rate of the victim.

Steps for CPR for adults, children and infants vary slightly and have been described separately below.

For adults and children older than 8 years of age:

For children more than 1 year of age and until 8 years:

According to AHA the procedure remains same as applied for adults and adolescents except that chest compressions can be done using one hand.

For a baby more than 4 weeks old and up to a year:

In rescue breathing for infants less than 1 year of age, the mouth and nostrils are covered with a mask and the strength of the cheeks are used to provide gentle puffs of air into the infant’s mouth. It should be kept in mind the infant requires little air as compared to an adult so each rescue breathe should be small and lasting for a second. Rest all the procedure is similar to CPR done in adults.

If AED or automated electrical device becomes available, it is placed over the patient’s chest and one shock is given followed by one cycle of CPR and then again a shock is given and the process is continued until there are signs of movement or medical personnel take over.

Whenever you note that the patient has started breathing but still unconscious, it is mandatory to place the patient in a recovery position.

The victim is turned to his/ her side and the head is tilted downwards and supported with one of the hands i.e. placed in a dependent position. Whichever side the victim is rolled over it should be made sure that the knee of opposite leg is bent to stabilize the victim. For example if the patient is turned to his/her left then the knee of the right leg is bent in a running position. Knee stops the patient from rolling onto the stomach.

In a pregnant lady it should be kept in mind that the lady should always be placed in her left lateral position so that the fetus inside gets proper oxygen and doesn’t press on the major blood vessels of the abdomen.

If patient has stopped breathing or heart has stopped working due to chocking then the foreign agent has to be removed first from the wind pipe before starting CPR. Chocking is most commonly seen in small children and infants but can happen in adults too.

If there is partial breathing, let the person cough continuously if he/she is able to do it forcefully. If the person is chocking, unable to cry, talk or laugh or breathing has stopped then a “five and five” approach as recommended by American red cross society is applied.

Start with CPR after the foreign agent has been dislodged and the victim has not resumed with breathing. If breathing gets revived place the victim in recovery position.

So, this was all about cardiopulmonary resuscitation or CPR. The article was an attempt to educate people with the basic life saving procedure that can increase the chances of survival of the victim in the absence of any trained medical personal and advanced medical equipment.