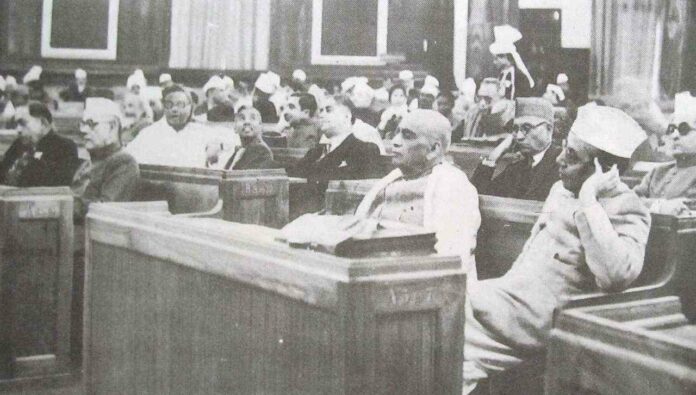 The constituent assembly was an assembly that envisaged for the establishment  of our constitution of India, on which the entire nation after partition will be going to run. All the governmental bodies, institutions, public offices and officers will go to work under and through the Constitution that had been set up with the help of Constituent assembly.

Objective resolution was a framework set by the nationalist leader of our freedom movement of India, and it was a guideline given by supreme leaders to work on it, while making the Constitution.

This resolution enshrined the aspirations and values behind the constitution making. On the basis of the objective’s resolution, India’s constitution gives institutional expression to the fundamental commitments-

At starting, India was under British colonial rule, initially the British East India company came up with the motive of trading, but after some time, the deftly changed their motive to set up a colony in India. Latterly, covered all parts of India and set up a British India government and provincial States. But in 1857, a ‘Sepoy mutiny’ had taken place  and shaken  the roots of British rule in India, and then after the East India company rule had been shifted to the British crown rule under direct order of British parliament and queen in 1858.

Scholars and historians termed this Sepoy mutiny as ‘the first war on freedom of India’. But after a decade, there were a lot of nationalist movements took place for the freedom of India under popular leaders like Gandhiji, Subhash Chandra Bose, Nehru Sardar Vallabh Bhai Patel etc. In the last, the spark of national movement had  burned down the rule and supremacy of British rule in India and finally it comes to an end on 15 August 1947.

But after this, the real battle of building a nation has started, an Interim Government of India, formed on 2 September 1946 from the newly elected Constituent Assembly of India and had the task of assisting the transition of British India to independence. It remained in place until 15 August 1947, the date of the independence of India, and the creation of Pakistan. The interim government was headed by Pandit Nehru, and from there the process of making policies, the Constitution, rights  has started for the prosperity and harmony of new India.

Critics of constituent assembly and constitution of India

Lawyer’s Paradise – many critics have said that the constituent assembly was mainly consists of majority of lawyers and advocates so it limits the flexibility and simplicity of the Constitution of India and hence, for common people, it’s like more dependable on the norms and laws of the constitution.

The elephantine size of  the constitution- unlike the constitutions of other countries which are mainly focused on the simplicity and briefly approaches, our constitution is rigid and very long so it’s creates complexity of processes. Critics also argue that our constitution is the  biggest and lengthiest written constitution of the world and it consists of currency, it has a preamble, 25 parts with 12 schedules, 5 appendices, 448 articles, and 101 amendments.

After the long fight for freedom, we finally got the independence on 15 August 1947 and a hard work of a few years we made out our constitution and finally adopted it on 26 January 1950. And from then it sets an example to other nations of the world  that a poor country can also have democracy and a well-written constitution for their nation. By witnessing, a lot of instability and wars with other countries, we are still able to maintain our country run in accordance with the constitution and it prevails  the popular democracy of the world in India. Instead of joining any camps after the second world war, we fought for our independence and gave a message to other countries that if there is a will and efforts ofthe leaders of the nation, then a poor and over populated country can also develop at a high rate of development and by giving equal rights and protections to all and each individual of the our society, shows the success and aspirations of constituent assembly.

So, India sets an example to other countries of the world and propagate the message of democracy and unity in diversity.