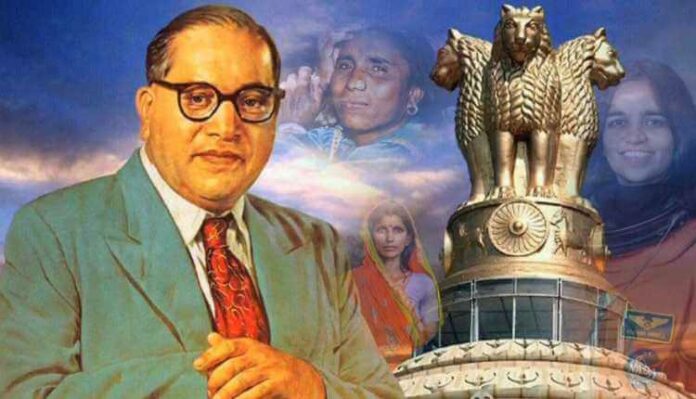 It has not been a while since we became liberated from the horrors of untouchability; however, the treatment of women as second class citizens persists decades after independence. The movement for the empowerment of women in India has been gaining proper attention from all fronts now, but its roots can be found in history. One of many attempts to bring women forward and at par with society is by Dr Bhimrao Ambedkar, who is widely known by the name of Father of Constitution in India. He is mostly known for his work for the upliftment of Dalits.

The caste system in India even though persists in some other forms was the reason for creating a situation of a divide amongst the society, and it led to the treatment of those who belonged to the so-called lower caste as outcasts. Indian constitution has provided the right to equality in two aspects. Article 14 enshrines the right to equal opportunity and equal protection of the law for every citizen in India. Yet somehow equal opportunity seemed to imply that women were to be left out of the category as they formed part of a different category.

It is vital to know his contribution towards the upliftment of the downtrodden irrespective of their gender and class or caste. He fought discrimination like no one else at the times when the division of society based on caste and gender was at its peak. He held very different views when it came to gender and caste. He believed that the caste system flourished as the classes enclosed themselves by prohibiting marriage outside the caste. However, he also said that the caste system is inherent in society and cannot be wiped just by allowing inter-caste marriage. Ambedkar linked the caste system and subjugation of women and held the views that they were interwoven.

Dr Bhimrao Ambedkar encouraged education as the means of upliftment for both Dalits and women. The pen is mightier than the sword, and the power of words can change the world. These are the words that we hear many times. To stop the joint oppression in terms of caste and gender faced by Dalit women and women in the General in India, Dr Ambedkar started newspapers named Mooknayak and Bahiskrit Bharat through which he covered the issues relating to the oppression of women. The newspapers were a way of making large masses aware of the issues faced by women in India. They unearthed the fact that Indian society considered women empowerment as unimportant and secondary.

You might also be interested in knowing about the challenges that are faced by every woman in India.

His work in ensuring equality for every citizen is significant, and this movement to secure the position of equality for women does not include just lower caste women but also stretched so far to cover upper-caste women even as the status of women in upper-caste society was no better than Dalit women. There is a vast variety of literature demonstrating the ways Indian society controlled the lives of women whether it was their education, conduct or sexuality. One of the often-cited works of Dr Ambedkar published in 1917 known as Castes in India shows how the Indian subcontinent controlled women and their sexuality only to maintain the caste system in India. Many customs maintained the status of women in society as the men wanted and we would not be wrong in saying that these customs such as Sati, forbidding widow remarriage, child marriage as ways to deal with the surplus of women.

Dr Ambedkar can be seen questioning the very core structure of the society and trying to change the internalized norms as they were the primary roots of the cause. Manusmriti, one of the leading scriptures known to be the law of the land carving out code of conduct and punishments for violations held a deficient opinion of women and the book even goes on to say that women are to be tamed and cannot be trusted. He also highlighted Manu’s views of women as mere seductresses, with their seduction leading to deviance and disloyalty thus requiring immediate control and proper training.

Ambedkar, in his writings, has widely defied religion and he often criticized Hinduism as the feeder of the caste system because of which he renounced Hinduism and converted to Buddhism. After his conversion, he convinced many other people to convert to Buddhism as the ideals of Hinduism seemed to be a bit orthodox to him with many customs emerging from Hindu scriptures which are the reason for the mistreatment of women and Dalits. He highlighted that Hindu scriptures had been catering to the needs of patriarchy by praising the conduct which treated women as mere chattel or animal sometimes. One such occasion is the famous work of literature known as Ramayan where the human form of Lord Vishnu, Lord Rama goes on to abandon his wife after he won over the army of Ravana who had allegedly kidnapped Sita. In the epic, many times, it has been emphasized that the females only existed to fulfil the needs of men. If they failed to do their duty, then they were no good, the tale glorifies the female figures who have shown a great sense of determination towards their male counterparts. In this tale, Rama denounces his wife on the mere rumour of her being defiled by Ravana who had taken her hostage by force.

Apart from questioning the religious practices leading to the inequalities in the society, Dr Ambedkar brought many constructive changes by proposing laws for the welfare of women being Member of the Legislative Council of Bombay, and he drafted gender-just laws granting paid maternity leaves for women who worked at the factories. His belief was that just as the employer reaps the profits of their hard work, and he must financially support them in the same manner as men. He also diverted our attention to the economic and productive dimension of childbearing and child-rearing, which only mattered to working-class women at that time. Dr Ambedkar realizing the toil and hardships suggested that the government should bear the burden of maternity leave as it is in the interests of the government and nation that the women get proper rest before and after childbirth as the deaths associating with childbirth seemed to rise. Ambedkar`s laws focused more on the needs of working women as he suggested paid casual leaves, compensation in case of injury and pension leaning towards bettering the working conditions for women. He could also be seen as the face of the movement encouraging reproductive choice and reproductive control along with the right to birth control facilities.

Dr Ambedkar was also instrumental in changing the face of Hindu personal law where he fought for equal rights of both daughter and son in the property of a person who had died intestate. Dr Ambedkar suggested changes in laws relating to marriage, suggesting the establishment of monogamy as a practice and various changes in divorce laws as well.

Further, if we look deep into history, we will find ourselves getting to know that most of the feminist movement and the changes in the Indian legal system favouring women or leading to their empowerment have been brought in place because of sincere efforts made by Dr Bhimrao Ambedkar. He strongly suggested that women should be given a right to education, and they have a right to exercise their rights with freedom. Various provisions in the laws giving the right to equality be it for Dalits or women are the result of the endless efforts of Dr Ambedkar.