Taj Mahal is considered as one of the most beautiful monuments in the world. It is known as the greatest architectural achievement in the entire range of Indo-Islammic architecture. It is an enormous mausoleum complex that was commissioned in year 1632 by one of the famous Mughal emperor Shah Jahan to house the remains of his beloved wife, Mumtaz Mahal. The monument was constructed on the southern bank of the Yamuna River in Agra. Taj Mahal is one of the most outstanding examples of Mughal architecture that combined several architectural styles including such as Indian, Persian and Islamic influences. It’s construction began in 1632 and continued for the next two decades.

Taj Mahal is built of beautiful white marble that seems to change color depending on the daylight. It shines like a diamond during the night. It was designated as a  UNESCO World Heritage site in year 1983.

Because of its mesmerizing beauty, Taj Mahal remains one of the most celebrated and stunning structures in the history of India.

The beautiful work done with precious and semi precious stones on the marbles of Taj Mahal makes it a unique monument in itself.  Its uniqueness lies in the innvoations carried out by the planners and architects appointed by Shah Jahan.

It fine and beautiful structure is what makes it unique. The tomb is placed at one end of the quadripartite garden instead of placing it at the centre, this placement of the tomb adds to richness and beauty of this place.

It is also one of the best examples of raised tomb variety. There is a square platform on which the tomb is raised. The four minarets with octagonal base extends beyond the corners of the square base. In order to reach the top of this platform, there is a series of lateral flight of steps built which are at the centre.

The architectural plan of Taj Mahal is known for its perfect balance in the sense that, the octagonal tomb is places in the centre, which is encompassed by portal halls and four corner rooms. Another remarkable thing about this monument is that the main gate stands in the centre of the southern wall of the forecourt.

Why is it significant?

It was named as Taj Mahal in honor of Mumtaz Mahal, whom he married in 1612 and cherished as the favorite of his three queens. The monument also entombs the emperor Shah Jahan himself. It is one of the seven wonders of the world. It is the epitome of love.

Agra is 204 kilometers from Delhi. You can reach there by Yamuna expressway through a car or a bus. It would take around 3 hours 45 minutes to reach the place from Delhi. 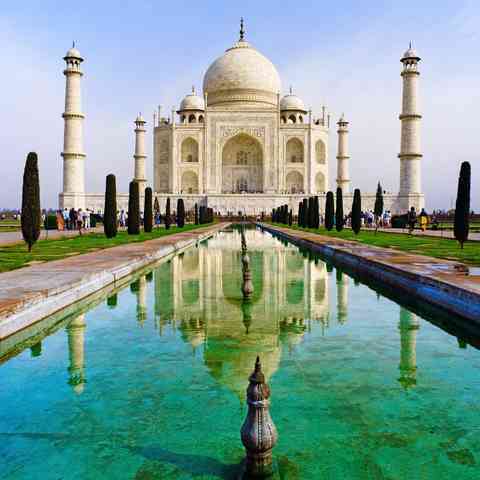 Akbar’s tomb is known as the resting place of another famous Mughal Emperor, Akbar. The tomb is located in Sikandra, Agra, India. The tomb was built in 17th century and it covers an area of 119 acres.This is the mausoleum that Akbar chose for himself but could not finish it during his time. This monument has Mughal elements like red sandstone and marble with geometric patterns engraved in it.

Akbar choose the site for his tomb when he was alive. Then his first son, Salim started the construction and Jahangir completed it. The construction started in 1605 and ended in 1613. During the reign of his great grandson, Aurangazeb, King Ram Jat ransacked the tomb and stole all precious items, carpets and destroyed the tomb. As an act of revenge for the death of his father, King Ram Jat even dragged the bones of Akbar and burnt it. Burning the dead is an insult for Mughals. Later, the tomb came under the control of Britishers who did the repair work of this place.

Akbar’s tomb is the greates amalgamation of different styles of architectures including Hindu, Christian, Islamic, Buddhist and Jain.

Adding to its architecture, it depicts the developing style of Mughal architecture. The tomb consists of three story minarets located on the four corners of the area which is one of the most significant characteristic of Islamic architecture.

Another important feature of this tomb is that the tomb shows and evidence of the early Mughal architecture as it consists of the construction made of red sandstone and marble, a feature that was to be replaced completely by marble in the later period. The place also comprises of Mughal styled garden.

This tomb is 14 kilometer away from Taj Mahal.

The south gate of the tomb is the largest. It also consists of four minarets located at the corners just like that in Taj Mahal.

There is a garden which is divided into four sections and the tomb is situated at the centre.The garden has water channels.

Moti Masjid also known as the pearl mosque is a mosque that is located inside Agra Fort. This mosque is famous for its engineered beauty and peaceful environment. Tourists of all religion can enter into the mosque. The mosque was built by Shah Jahan in the year 1648.

The construction got completed in four years and around two lakhs sixty thousand was spent on its construction.The mosque gets its name from the color of the marble used for the construction.

The moqsue is located near the Yamuna river.  There are three domes that are made of light white marble and these domes stand on the red sandstone walls. The structure has beautiful design which is symmetrical. It is located to right of the hall Diwan-E-Aam of the Agra fort.

The Agra Moti Masjid is very close to the city center.

To reach here you can avail various bus services from the Power House Bus Stand. This place is also closer to railway station. It is at a distance of 8 kilometers from air port.

This place was built in the memory of the great Sufi saint, Sheikh Salim Chisti.

Fathepur Sikri was abandoned due to severe water shortage. It was known as the capital city of the Mughals.

As put down by UNESCO, the place is listed in the prestigious list of World Heritage. Fatehpur Sikri is  considered as one of the greatest prides of Indian culture. It promises to show the glimpse of the life inside the Mughal court.

What is unique about Faterhpur Sikri is the stone column that bears some association to the rule of Akbar. Another salient feature of this place is that there is a huge Lotus Pillar throne. This throne is believed to be the throne on which the emperor Akbar used to sit while holding court.

Jodha Bai was the Rajput queen of emperor Akbar and was his third queen. The Jodha Bai palace located in Fatehpur Sikri is one of the most fascinating architecture which combines the two most conflicting architectural styles that are the Rajput style and Mughal style.It is a self contained complex which was designed to ensure that the women in purdah had everything that they needed in their lives.

What makes this place unique is that the palace is located on the eastern side of the fort, that was used as a residence for the various queens of Akbar as well as the other members of the harem. The main palace has a courtyard which corresponds to Hindu architectural style.The courtyard is places at the centre and the living quarters are all built around it.   The structure is built of red sandstone. Turquoise bricks used on the roof of the buildings further adds to excellence.

To the north of the complex, is a series of gardens and on the southern side are the harem baths.

It has remarkable carvings.The palace also has Gujarati and Rajasthani patterns. The palace has a rectangular block. Motifs like parrot, elephants, lotus etc brightens up the interior of this place. It has chhatris, pillars and domes. 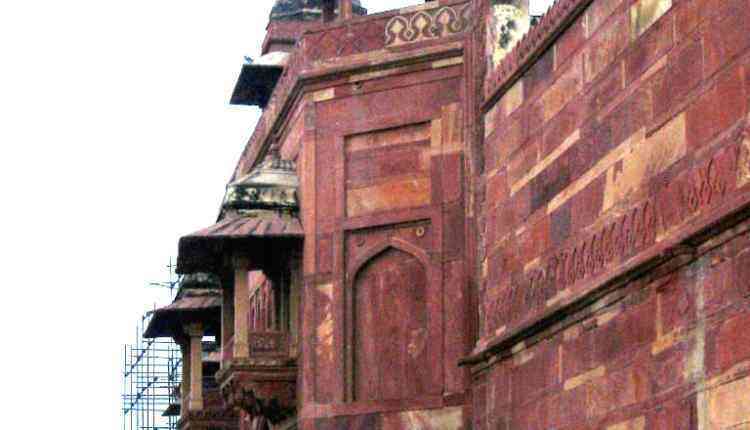 International Society for Krishna Consciousness (ISKCON) constructed its first temple, today known as the Iskcon Temple VrindavanSri Krishna Balrama Temple. The temple was built in 1975 by the ISKCON cult. Swami Prabhupada is known as the founder of ISKCON laid down the foundation of the shrine.

The temple has Samadhi of  A. C. Bhaktivedanta Swami Prabhupada that is located on the left hand side of the temple complex. The place is made of white marble. The image of Swami Pradbhupada enhances the mystical appearance of this place.This is the place, where the body of Swami was kept after he left this corporeal world. Today, ISKCON temple is considered as the most beautiful temple of Vrindavan.

The principal deity of the temple is the image of Krishna-Balrama. The statue of lord Krishna can be lured from the main entrance of the shrine. The image is housed under the central cone (shikhar) of the temple. The images of Gaura-Nitai and Radha-Shyamsundar  can also be appreciated apart from the beautiful image of Krishna Balrama. These are located along side the central shrine. Ornamentation is done to the deities which makes the shrines look exceptionally beautiful.

It is a  Hindu temple that is dedicated to Lord Krishna, in the holy city of Vrindavan.

It is situated near Shri RadhaVallabh Temple and this temple is among the 7 temples of Thakur of Vrindavan.

The image of Lord Krishna stands in the Tribhanga posture.

It is Known as “the temple of God’s love” and this grand religious place is dedicated to Radha Krishna as well as Sita Ram.

The temple is made out of white marble and is adorned with very intricate carvings. This temple is also famous for its architectural beauty.

There are statues of Shri Krishna and his admirers, portraying essential occasions surrounding the Lord’s life, cover the main temple. Various scenes from Krishna’s life, like raising the Govardhan Mountain, have been depicted on the periphery of the Prem Mandir. The lighting of the temple further glorifies it look.

The musical fountain, along with the beautiful light display leaves people amazed. The colored water twists and twirls to the tunes of the kirtans of Radha Krishna being played nearby are an absolute delight.

Okhla Bird Sanctuary is a bird sanctuary which is located at the Okhla Barrage over the river Yamuna.  September-March is the best season to see winter migratory birds over here.

Amongst the bird varieties that can be spotted include White-rumped vulture, Indian vulture (both of these are critically endangered) along with vulnerable species like Baikal Teal, Baer’s Pochard, Sarus Crane and Sociable Lapwing. Ferruginous Pochard, Black-bellied Tern and Grey headed Fish Eagle.

Pallas’s Fish Eagle, Lesser Adjutant, Bristled Grassbird along with Finn’s Weaver are some of the other species that can be spotted.

Black-tailed Godwit, Common Redshank, Wood Sandpiper, Western Marsh Harrier along with Pied Avocet, Blue Throat are the other birds that can be seen. 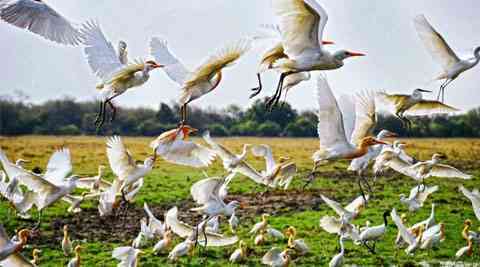 Worlds of wonder, WOW is an amusement park occupying a huge span of land  has a wide range of rides that are enjoyed by people of all age groups. For all those who love adventure and seek for thrill this is a must place to visit. Worlds of WOnder has  has a huge water park as well. A special zone called La Fiesta has been designed for kids which has good number of rides.

Activities like Paint ball, Go-karting, Air hockey and many more can be enjoyed at WOW.