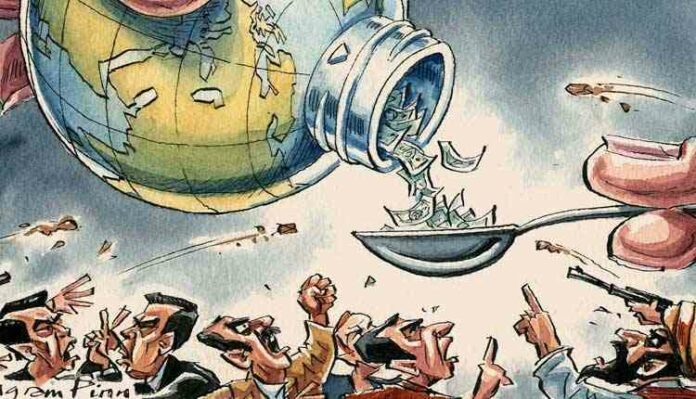 Globalisation is a process which is responsible for the contraction of the world. Anything which was at national level has become International. On the name of Globalisation, people also use the term Global village, which is a spoof. Global market and communication revolution is the basic reason behind this. The countries who are expanding their markets are doing everything because there is a race to occupy the world market.

Globalisation has both negative and positive type of energy, or it can be said that it is a two pronged sword. Various areas are witnessing positive change while some areas have got negative changes. Even a state of loss and destruction can never be denied. Let us throw some light on negative aspects of globalisation which has made us think that whether it is a modern form of imperialism

Globalisation has integrated the currency. In 2001, all countries of Europe adopted a new common currency called Euro, which eased out the problems in currency transactions. Economies of developing and under developed countries are mainly dependent on agriculture and huge human capital also depends on it. To liberalize the agriculture sector for the world will be a suicidal step for these countries but they are being pressurized for it. Here are some following facts in this context that, in the Kaankun conference of South Asian countries  development and under developed countries are pressurized to liberalize their agriculture sector . It was argued that it will increase their GDP. Most nations have adopted a liberalised approach in industrial and employment sectors but countries like India have not opened its agricultural sector for the world despite of continuous pressures of doing it.

Twentieth century marked the end of colonial rules. Many nations were freed from these colonial rules after independence movements. This century also witnessed two World Wars and intense nationalism was the result of these revolutions. In the process of nation building, nationalism re-established national markets. In the decade of 1980, the world market begins to integrate, which gives rise to free market system, open economy and policy of liberalisation.

All markets were open for all after the integration and which provided unbound opportunities in trade and commerce. The negative impact being that country state policies are now determined in the pressure of markets and direct intervention of markets in national issues has increased. The market is stuck in strong economic cage of multinational or transnational companies. Small and cottage industries are sidelined by the market and the contribution of economically weaker sectors has become negligible.

Increasing gap between rich and poor

Due to globalisation the gap between the rich and poor is increasing day by day. The poor are becoming more poor and rich are becoming more rich. There is imbalance between the distribution of wealth. Although globalisation has opened new doors to employment and generation of money but due to corruption and poor law and order this gap is increasing and there is irregular distribution of wealth. The politicians want to fill their own houses with money and this corrupt system has broken the backbone of our nation.

Increase in terrorism and crime

With globalisation poverty has also increased, the things have become more expensive and out of the reach of common and poor people. Unemployment has also increased with the decline of small scale industries.This has led to increase in crime and terrorism in country. Youth unrest and youth agitations are common in states.

People have become money minded and are ignorant about their responsibilities towards environment . The trees are being cut for land which has increased global warming and depletion of ozone layer. We have invented nuclear weapons whose effects are severe that even the coming generations will be facing them. Natural resources are being used and water is getting polluted. Problems of slums has increased in urban areas.

Another effect of globalisation is that languages of weaker nations are beaten. Hindi has not been effected to the extent as it is internal power of the nation, but the languages of the weaker, less populated and poor countries have surely been defeated. If they want to join the global competition they have to come on internet, which needs knowledge of English. In multinational and transnational companies basic condition of employment is knowledge of English and person should be fluent in it. Attack of English is also coming through aerial routed via foreign TV channels

If we stick to cultural side of globalisation, the issues related to imperialist culture attracts our attention. The United Nations is also concerned about the issues of extinction of languages. Will the English dominate and  the other languages will come to the extent to extinction?

Out sourcing is an agent of globalisation . A heating debate is also going on in the European countries and USA. It was initially started by USA, but it is trying to put an end to it. Because the developing countries are getting the benefit of it. Bussiness related outsourcing is new trend which helps in decreasing the production cost of the companies. It has cautioned the Americans that foreign companies in the name of outsourcing are stealing the technology and information. So the USA is taking steps to ban out sourcing to foreigners.

Migration is the process of relocation from one geographical location to other or from one nation to another. Globalisation has intensified the process of migration and also the problem of adjustment in a new culture of new country. There is rise of functional relationships and our moral values are being degraded. The bond of trust and our relationships heve been effected. The conflict and disharmony in people of different cultures on the values, standards, lifestyle and behaviour etc are increasing.

Since the globalisation has changed the world into a market, the voice of labourers has been suppressed. The national government is being deprived of their powers. Social insecurity and financial capital is being encouraged .The  problem of employment of non skilled labour has arisen in developed countries and Privatisation has minimised the guarantee of employment, thus people are sceptical about their bright future.