Smart Home: Home of future You May be Staying in one Very Soon 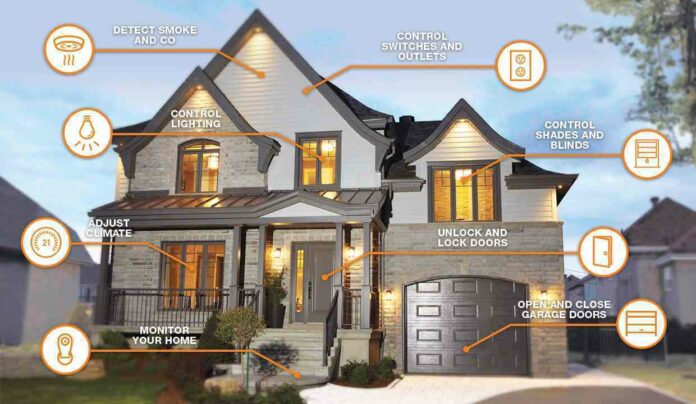 How would you like staying in a home that runs itself? When you come home tired from work, at a flick of a button the lights come on, your music system starts playing your favourite songs, the air conditioner gets set at a temperature you find comfortable or if its winter the geyser starts heating water for your bath, and that’s not all, in case you forgot to switch off your air Conditioner a message is sent to your mobile phone from a remote location could do that.

Welcome to the world of smart homes!

A home or working environment that employs technology to allow devices and systems to be controlled automatically is a smart home. The degree to which this control is exercised is variable, depending on the money you spend and the type of building into which the technology is to be installed. At the advent of 1990s, the average home started to have interactions with many electrical devices such as refrigerator, television  communication appliances such as telephone and most advanced computer.

The functioning of all these appliances required dedicated wiring system. So in a normal residential environment there are various wiring systems including power wiring, telephone wiring and cable TV wiring. Some homes have additional wiring for home security and PC local area network etc. All these systems used different types of communication media and carried different types of signals completely independent of each other .

At the same time due to great advancement in Integrated Chip Technology computing costs experienced a sharp decline and miniaturization process gained momentum making microprocessors a common part of home appliances which resulted in enhanced intelligence level of home appliances. But as these appliances were operated in complete isolation from each other, hence this intelligence had not been utilised to its true potential. So it was during this time that need for unified home network was felt keeping in mind various advantages it could offer such as, ease of use convenience i.e an appliance could be controlled and operated from different locations, sharing of information and minimum wiring confusion. Such a home having a network of all household appliances is now called a Smart Home.

How does a Smart Home work?

The key to control of applainces in a smart home lies in the ability of the products to communicate . The nature of these devices is very similar to that of other networks such as computer network. Each switch or module has a unique address. When a control signal is broadcast through the network, all the modules in the network can hear the commands, bot only to those to which the signal is addressed will respond to it.

Most of the commands in conventional homes are passed on to a device through the use of a physically operated switch. Generally pressing a switch alters the supply of electricity to the device. Whereas in a smart home, the switch takes on a different function. Rather than regulating the flow of electricity, the switch merely sends a signal to the communication network called a “bus system” informing the network of new position of a switch . A controller fitted to single light fitting, or number of lights receives a signal, recognises the intended message and responds by turning on the light. Hence the regulation of electricalflow takes place at the controller rather than at the switch

If the bus system connects more than just lights, it is possible to radically change the way the home is controlled. In that case the switch is no longer directly related to any particular device so it can operate any device on the network that has been told to respond to the signal from the switch . So multiple lights , possibly from different rooms, could be controlled and even dimmed to different levels.

The interface between the smart home and user is important to ensure that the home control system is easy to understand and operate. The normal switches and dials used in conventional homes are the simplest form of interface for controlling appliances of smart home. If a dedicated bus system or wireless network is used, conventional switches may need to be replaced with specific ones.

Smart phones and computers can be used as controlling devices for smart homes. In such homes internet based control is also provided by adding a web server to the home which would allow a visual representation of the home to be created as a web page that could be accessed from a web browser. This could be used to control the home either from inside or outside over a local area network ( LAN).

The smart home promise greater convenience for the residents, since task that require manual control becomes automated. For example when you wake up in the morning you can just push a control switch by the bed aide and can turn al the bedroom lights and put television on, open the downstair curtains and switch on the geyser etc.

Smart Home technology also enhances the security of home. For instance, it permits the entry only through a smart card. In case of forced entry the owner and the security agency are immediately alerted through SMS, email or phone. Also in case of an emergency, example in case of fire or gas leakage, the security alarm will be activated and signals will be sent to emergency services like fire brigade and owner of the house.

An important advantage of smart home is energy saving . Sensors provided in smart homes automatically shut off the heating and cooling devices when the room is unoccupied. Furthur, the automated home recieves signals and operates in the most cost-effective way.

Thus a smart home is highly promising concept of networking home appliances for the purpose of not only remote control but also adding intelligence to home. It also provides novel services resulting in great improvements in user experience . Further the revolutionary developments in high speed computing devices along with IP based Internet, mobile communication  will definitely help in rapid growth of smart home concept.