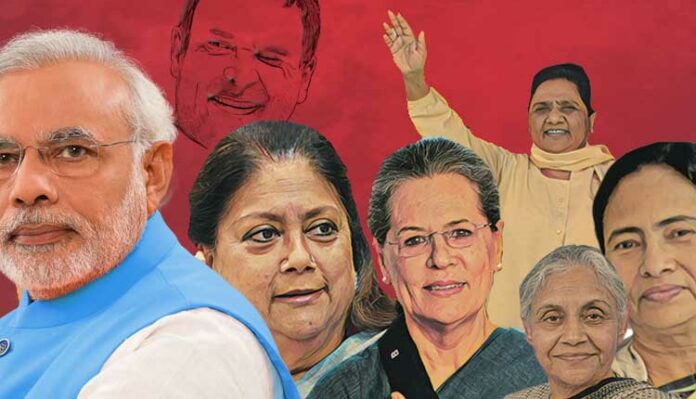 It has become a joke and it is something which will not end it seems either as a joke or as a slur on the face of the present political parties The more the days are passing by, the more we see that the parties that is engaged in fighting the polls to assert their rule in India are making a mockery of them by using all the kind of language that really raises many an eyebrow and questions.

The language used by the politician actually represents the standard and it reflects the attitude beside the aptitude of the people of that country A politician, is it the Prime sole Minister or the President who heads his country is the SOLE representor of his country when he represents his country abroad and the way he presents himself reflects the behavior and the culture of his nation A nation is known by what kind of a representing or presenting… does the head present himself.

It is here that the way the Prime Minister or a President talk or behaves is taken into account, is judged by and is looked upon by the one’s who are hearing him His way of representation, thus becomes very important as he and his nation and their standing is judged by the people and then a stock is taken into account as to how is that nation or what could be that nation.

Of late the language of the political parties in India and their representatives have become so boorish and so very rubbish that it feels like this nation once had been a lump of shit with all bullshit ruling the country It is evident when they argue for a cause when they represent their party for a debate on the national TV and when they deliver their speech The words cast out and the language that comes out of their mouth especially the politicians of the Congress party is to be really condemned rather than hearing it or believing it.

Tall promises made by the leaders have been put in the dust bins. The implementations of the schemes also did not bear and bring out any positive result, be it the UPA that ruled and governed the nation under the Manmohan Singh Government from 2004 to 2014 or even the NDA Government, which has ruled from 2014 to 2019 Not finding any proper reason to go to the public to highlight and talk impressively about their achievements; as the parties to garner the vote to rule the nation from 2019 to 2024 have only one thing in common to talk and that is blame each other, talk ill about each other castigates one and sundry in the public and form a negative opinions by the talks addressing to the people so that people form a negative feelings for the parties and vote negatively and one such example to hit the others has been talk and make use of the foul words to assert one’s statement in the public In doing so they have crossed all the limits of the decency.

Congress in that matter has become cheap and it seems an entity that ought to be thrown into the septic tank when it comes to their representative talking to the public.

The attack of the Congress is realizing that their ascendency to the throne was in great danger way back in 2011 started attacking Mr Narendra Modi in such a repulsive manner that it broke loose the décor of the language and its standard that one ought to maintain it in public Madam Sonia Gandhi started it and thereafter the other Congress leaders, senior and nationally well known both as the face and the figure came out with lambasting words which are so very toxic even to write here in the public and crude The greatest cheapness that was and that could be ever heard was the word Chai Wala which the Congress leader used it against Mr Modi and later Mr Modi converted this adage invented by the Congress as his main weapon and forte to win the last General election Now the adage has been the word chowkidar and car which means the watchman and the thief One shudder to think about what the world at large thinks about India and the polity of India when these kind of words is used in the system and scenario of Indian politics.

Congress thinks that by using all the foul means and the slangs can cast an impression by which they can turtle the people of India and can get their votes But this is a wrong impression and a wrong line of their thinking People are not impressed by the wrong words that one chooses while expressing his concerns, but by the policy that one has for the brethren by which one and sundry could be benefited and here it is where the Congress is point blank zero.

Indian politics has sunk to the grade of being cast it as a septic tank and Congress is the party the grand old one which is responsible for the same In this matter to follow them closely and nearly beat them would be the Samajwadi Party Their attitude and the language to describe the women leaders has been really pathetic.

As if that was not enough the insult meted out to the woman folks and the kind of the language used are really to be examined microscopically before coming out with the fact whether has there been any country that exists in this world has ever been insulted the way the Indian women politicians have been insulted and really minced to death by the words used against them The worst to suffer in this account has been madam Hema Malini, Madam Jayaprada and Madam Smriti Irani The words like “naachnewali”, “thumkawali” and “rakhail“ used on these ladies by the opponent, especially the Samajwadi Party and their third rated and useless graded politicians defies all the logics.

Actually, all the parties which are fighting the national elections have nothing as a plan or the policy to offer to the nation to the public that resides here Nobody is talking about education, inflation, unemployment, health related issues, agriculture and farming, industrialization etc. All that they are talking is all nonsense and nonsense are the Indian voters who elect their leaders nonsensically Leaders are asking to voters to vote them on the basis of the language, caste and the creed This is really detrimental to the cause and the future of this nation Best of the things comes out by the planning that one holds for the nation and the road maps she’s and not by splitting the society into linguistic, caste and the creeds to garner the majority to govern and rule this nation.

A nation becomes weal both in terms of output and efficiency if the strength of the party is constituted by the basis of caste, creed and other such elements which has nothing to do with the governance and which cannot strengthen the social fabric of the nation A splintered nations often a cheap victim to the attack from its enemies and internally it crumbled very fast when there is an economic unrest in the country. The example of Eteria, Ethiopia and some of the African nation are the class examples of his same A small little word of encouragement from their national head cold have solved the matter or them, but as they did not say appropriately when it matters the most heir conditions deteriorated and the nation went to the dogs This is where the words of either the President or the Prime Minister becomes important to hold them and their country.

It is here in the context that there has to be somebody who has to rethink about why to vote to elect these kind of leaders who not not have a road plan to drag the nation forward if that cannot be pulled easily and here it is the words of the President and the Prime Minister holds good and it throws in some confidence amongst the public and the people But if one has to pull the Prime Minister down what can one expect better from even the Prime Minister.

The Prime Minister so far has taken all the slur and the filthy words thrown at him with ease and has not shot it back in a manner that could really be considered as deplorable That is the way to deal with the situation and that is where the words and the attitude of the Prime Minister become important for him to restraint himself and create a confidence amongst the people that nothing is as bad as ever as it appears.

His word and his attitude are what neutralizes the bad that might come out of it and the Prime Minister has so far been a champion in his act to neutralize the situation.

Bhattacharjee Shyamal
Shyamal Bhattacharjee has been a SPORTS SCRIBE to start with, a MARKETING PROFESSIONAL for 35 years and author of SIX International standard books . Now he spends his entire time in SOCIAL DEVLOPEMENT and WRITING.