The Tea of Assam: Its Heritage, Uniqueness and Challenges of the Industry 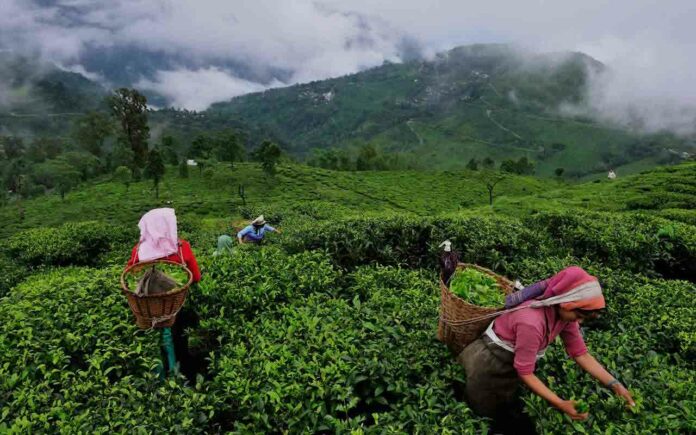 Waking up in the morning, most of us can’t start our day without a sip of tea. It is perhaps the most favourite and standard beverage all over the world. Today, tea has become a part of the culture in many parts of India. To show courtesy and hospitality to their guests, usually, a cup of tea is offered in many Indian homes. Although almost everyone loves to have at least one cup of tea during a day, or even sips numerous times throughout the day, many would have little knowledge about tea. Tea cultivation and commercial tea production in India was started in the North-eastern state of Assam. It is still the major hub of tea production of India. To know the history of tea in India, we can’t help revisiting the history of the tea industry in Assam.

History of Assam tea goes back to the British era. The culture of tea drinking was originated in China. Commercial cultivation and manufacture of tea also began in China. After British East India Company established its monopoly of the far east trade with China in the second half of the 17th century, Britain became a tea-drinking nation.

However, the danger of stopping of tea-export was looming over for Britain owing to increasing conflict between Chinese authorities and British traders. But, the East India Company was not willing to lose the lucrative home-market in Britain anyway. As such, in the early 18th century, the Company looked for an alternative source of supply for tea.

In the meantime, the discovery of wild tea plants grown in the jungle of Assam by a trader named Robert Bruce in 1823, opened up the possibility of tea cultivation in the vast tracts of jungle land of Assam. However, from 1833 only, actual attempt for tea planting in Assam was made. British Government, in their systematic effort to grow tea in India, formed the historic Tea Committee on 1st February 1834 during the tenure of the then Governor-General of British India, Lord William Bentinck. On the other hand, Charles Alexander Bruce, brother of Robert Bruce, was appointed Superintendent of Tea Culture in Assam. The first tea plantation attempt in Assam was made in 1836. However, that turned out to be a major disaster for lack of proper knowledge of climate and location on the part of British entrepreneur. The reasons found for this failure were: firstly, the Scientific Commission of the Tea Committee which traveled Assam that time preferred the tea plants shipped from China instead of the local variety of Assam, but the imported plants could not cope with the climatic condition of Assam; secondly, the location chosen was a temporary river island (Char) at Kundilamukh near Sadiya which was washed away by torrential floods during monsoons.

Alexander Bruce, as an immediate measure, shifted the remaining alive plants to Jaipur of Assam. With these very plants, tea-plantation at Chabua was started; now, Chabua is the oldest tea-garden outside China. Experiences gained from this incident convinced Bruce that the indigenous tea species of Assam were no way inferior to its Chinese counterparts. This prompted him to open a nursery of native bushes at Sadiya. Meanwhile, Bruce was also able to convince the Tea Committee regarding the superior quality of indigenous Assam tea. Bruce had made it sure that Assam tea became a major commercial success at the global level. After successfully establishing Assam tea at the global market, Bruce later opened up three more plantations at Deenjoy, Tingri and Hukanpukhuri.

Thus, Alexander Bruce pioneered the industrialisation of tea production in Assam by demonstrating the feasibility of commercial cultivation and manufacture of tea. His effort ushered in the golden age of tea production in Assam. In 1839, the Assam tea Company was formed. Subsequently, many enterprising Europeans came up to try their luck on a tea plantation, and lots of tea gardens were opened. In 1859, another tea company, the Jorehaut Tea Company, came into being. On the other hand, notwithstanding opposition from British planters, many enthusiastic Assamese entrepreneurs also started tea plantation on their own.

Nowadays, the tea industry of Assam is one of the primary industry of the state. Of late increasing numbers of small tea, growers have strengthened the productivity of tea in Assam. Tea is a major item of export and foreign exchange earner of India, and in this context, Assam has the largest share in India’s tea production. It accounts for over 50% of total tea production of India. Moreover, spreading over 3.5 lakh hectares of land, Assam tea gardens and its related industry employ almost 0.7 million workers, while it supports one million dependents.

The uniqueness of Assam tea:

Assam tea is significant not only for its historical value but also for its special characteristics. All over the world Assam tea is preferred by those who love to have a strong and brisk cup of tea. Some of the unique characteristics of Assam tea are mentioned below:

Generally plucking season of tea begins in March. Due to heavy rainfalls, about 75% of the Assam tea is produced between July to September. From December onwards, the dormant period sets in.

a) Assam orthodox: It is protected under Geographical Indication (GI). The liquor made from Assam orthodox tea is rich, textured and has a deep colour. It is exported to the global markets of the USA, Russia, Germany, U.A.E, Iran and Chile.

b) Assam CTC (Crush Tear Curl): This variety of Assam tea is wide, brisk and pungent. Its appearance is granular and blackish brown. If the consumers prefer milk in preparation of the beverage, the CTC tea of Assam makes that cup of tea a unique experience. It caters to the global markets of the UK, Poland, Egypt and Pakistan.

Challenges of the Assam tea industry:

Also, quality of soil and climatic condition of tea garden areas are quite suitable for growing varieties of fruits, spices, medicinal plants, herbs, vegetables and floriculture. As such, the growth of horticulture, floriculture and pisciculture, hand in hand with tea production is very much possible. Such types of crop diversification will also lead to the rapid development of the Food Processing Industry in Assam.

The Government of Assam has already provided Tea Estates permission for diversification and use of land for alternative economic activities. Prospects of Eco-tourism near tea-garden areas are quite encouraging both for investors and tourists. In the near future, diversified tourism prospects such as Tea and Golf tourism, Adventure tourism, Water sports, Wildlife safari etc. will materialise to reality. Pilot projects in tea gardens near Kaziranga National Park and Upper Assam region have shown promising sign. If studies are to be believed, visits of foreign tourists will grow around six-fold in the coming five years, while the inflow of domestic tourists will also increase up to 15% to 20%.

From 1823, when Robert Bruce discovered the wild tea plant in Assam, the tea industry in Assam has traversed through many transformations. Today, tea cultivation has spread to other parts of India and world, such as Sri-Lanka and East Africa. However, in most of the producing nations, Assam variety has been preferred for plantation. It indicates that the history of Assam tea is indeed the history of Global tea industry.

Pranjal Pratim
A post graduate in Electronics from Gauhati University, Pranjal has a knack for creative writing from his childhood. Sometimes the life around him excites him so much that he can't help sharing experiences through his writings.