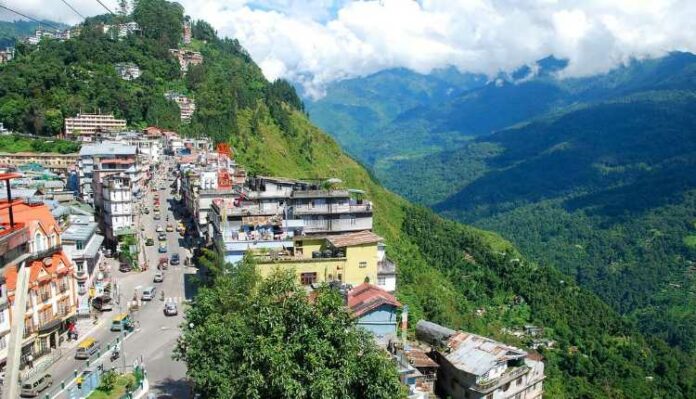 The beautiful hilly state of Sikkim is genuinely a scenic destination to visit. Its beauty is enough to leave anyone awestruck, no wonder it is the only brother of the beautiful seven sisters North-Eastern states of India. It’s a culturally rich state with a royal heritage and beautiful history. It was an independent country for a long period of time from 1642 to 1975 ruled by the Namgyal Dynasty. The rulers of this Namgyal Dynasty were known as “Chogyals”. In 1975, the Indian army arrested the King and the Parliament of India declared Sikkim now as a part of India and its 22nd state.[1]

Sikkim is the least populated and second smallest state in India. Sikkim is not only culturally rich but also economically prosperous. It is the third wealthiest state in India. Sikkim’s main ethnic groups are Lepchas and Bhutias, now along with Nepalese ( including Chettri, Newari, Limbu, Gurung, Rai, Murmi, Kami, Mangar, Brahman and Dorjee). It is also the home of the third highest peak on earth and the highest peak on India, Mt Kangchenjunga. 35% of the state is a part of the Kangchenjunga National Park, and as a result, the state is very well known for its rich Biodiversity. Tourism plays a massive role in the state’s income. Thousands of tourists visit the state every year, especially during the peak time to witness the snow.

The Top 10 Picturesque Places to Visit in Sikkim are: 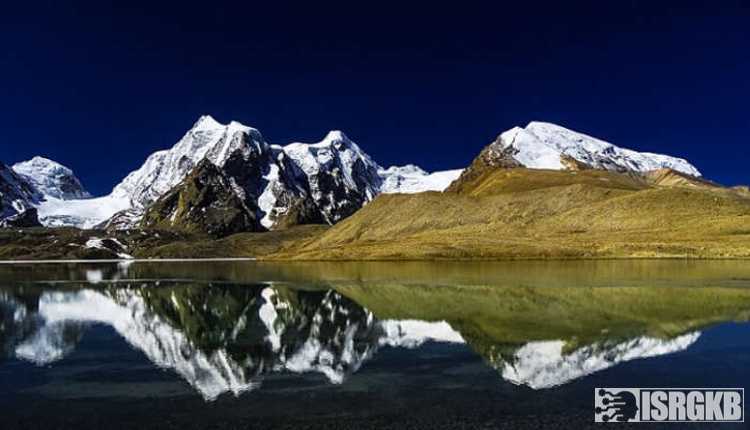 Located in North Sikkim at 18000ft, it is one of Sikkim’s most favourite tourist destinations. The Indian army heavily guards the place, and you have to make inner line permit a day before in Gangtok to visit it. Many travel agencies can help you with and plan your trip to Gurudongmar Lake. You cannot directly reach Gurudongmar lake in one day, and you have to halt for a night in Lachen. There are several guest houses for your convenience. And the next morning, you can begin the journey from there to Gurundongmar lake. When the first rays of the sun touch the snow-covered mountains, they glow like gold, which makes the whole road journey very scenic. The landscape is very similar to Leh. The lake is surrounded by barren land as any vegetation does not cover them. There are no facilities to halt there. You are permitted to visit the place for only around 30 minutes as it is a highly restricted area and to stay there for too long may make you have complications with breathing due to the high altitude. The ideal months to visit Gurudongmar lake is between March to May when the skies are blue, and the lake is greenish-blue in colour. During the winter months between November to February, you can witness the frozen Gurudongmar lake. 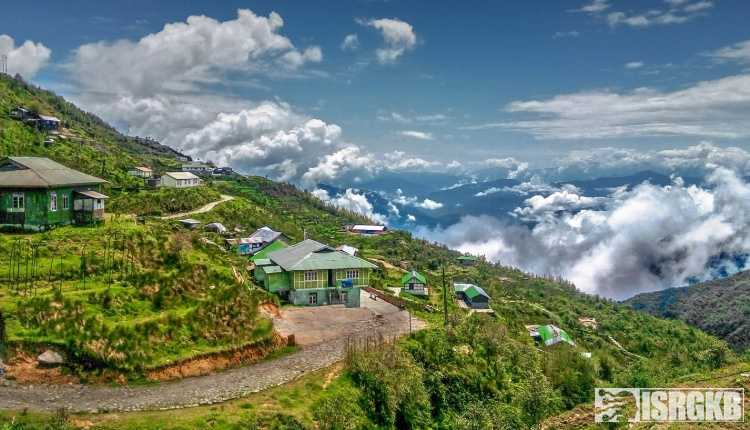 Also located in North Sikkim, this valley is known as the valley of flowers. In the right season, the whole valley is covered with countless beautiful rhododendron flowers, giving you Switzerland’s feels in India. After your trip to Gurudongmar lake, you return to Lachen and then Lachung which is in the other direction, take a halt there for a night and visit Yumthang the next day. The ideal flowering months to visit the Yumthang valley is from March to June, after the harsh winter when the whole valley is covered with snow. Around the valley, you see the pretty sight of yaks grazing by the river. The valley is also known for some natural hot springs. Also, read the best and popular hiking places in India. 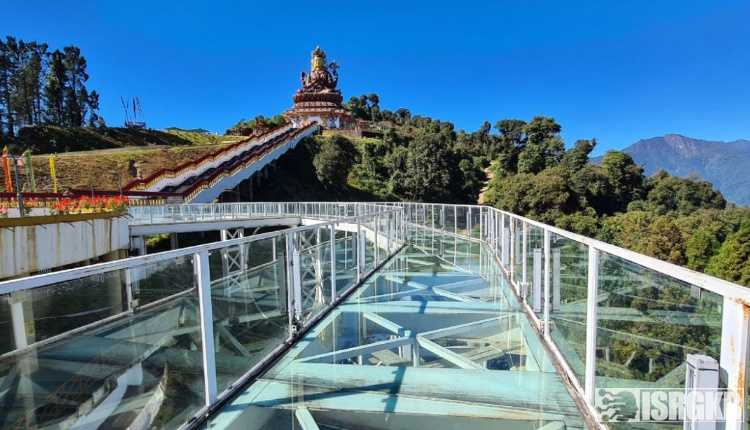 Pelling is a small town in the west of Sikkim where people mostly visit to see the breathtaking view of Mt. Kangchenjunga. After the famous skywalks of China that we have seen a lot on YouTube and news, Sikkim’s small town now has India’s first and only glass skywalk. It was inaugurated in 2018 and ever since has been a hot tourist destination. It is built opposite to the 137ft tall golden statue of Chenrezig or Avalokiteshvara, a Buddha’s calm, composed posture. You cannot have a fainthearted or have vertigo to visit this place as it allows the visitors to look thousands of feet below. The place is quite affordable to visit with entry fees of only INR 50. Although it might not be as big as China’s skywalk, Sikkim holds pride in this glass skywalk. 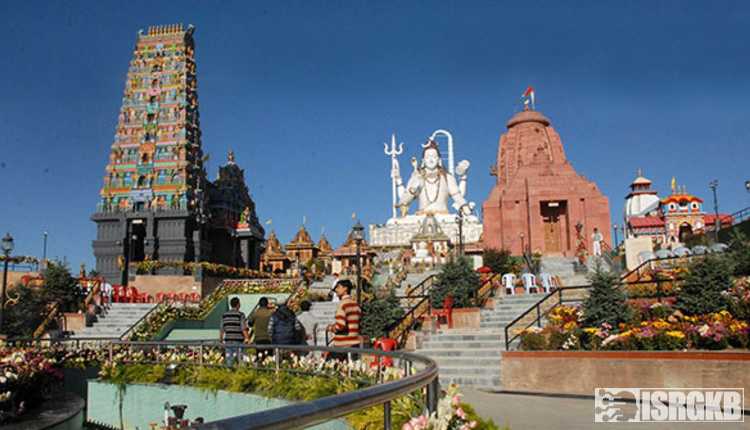 Namchi is located in South Sikkim. The place is home to mini versions of the four religious Hindu Dhams. The whole place has a spiritual vibe. You can find the mini versions of Kedarnath Dham, Rameshwaram Dham, Dwarka Dham and the Badrinath Dham. They are the accurate models of the real Dhams and gives you a blessed feeling. Besides, there is a huge statue of Shiv Ji. The place is so beautiful and magnificent that it will definitely make you speechless; this is definitely going to make your whole Sikkim trip blessed with God’s blessings. The entry here is also only INR 50. Don’t miss the greatest places in India to spend Winter, Summer and Autumn Seasons. 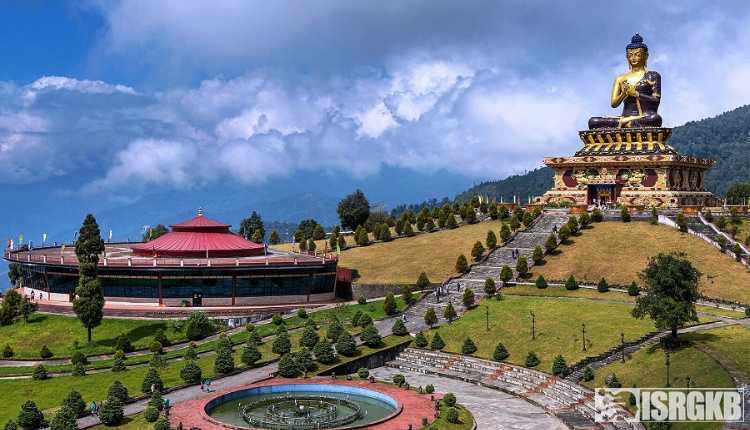 Ravangla is also situated in South Sikkim. You have to cross Namchi to reach there. The Buddha Park is also popularly known as Tathagata Tsal. The Buddha park has a 130-foot-high statue of Buddha which took some time to be constructed from 2006 to 2013. The statue is constructed as a tribute to the 2550th birth anniversary of Lord Gautam Buddha. It was sanctified in March 2013 by 14th Dalai Lama. It is now an important religious destination for the Buddhists. It is surrounded by the Himalayan ranges from all sides and gives brilliant views. The statue is so tall that it is visible from South Sikkim and few West Sikkim parts. The park also has a museum which depicts the story of Buddha’s life. 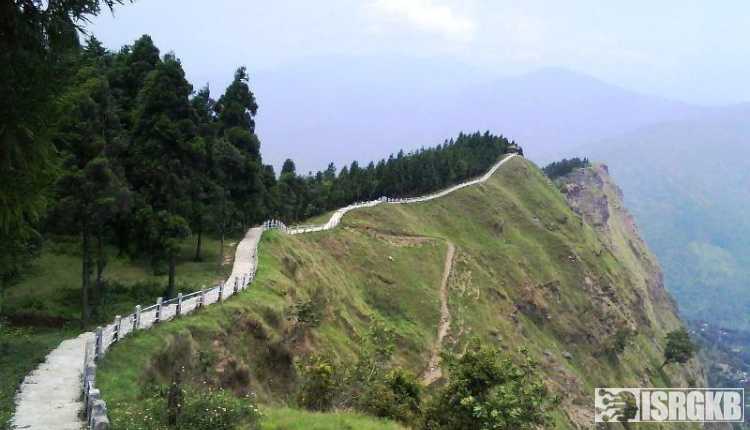 This can be quite scary for those who fear heights but breathtaking for those who love the mountains. It is long stretched gorgeous cliff at the height of about 10,000 ft and at the edge you can get a picturesque view of Sikkim’s beautiful valley and the river Teesta that flows below. It is located in a small hamlet near Sadam in south Sikkim. From there, you can also get the view of Darjeeling and Kalimpong’s neighbouring hills at a lower elevation. This place is not as popular as the others, but it is worth the beautiful view. 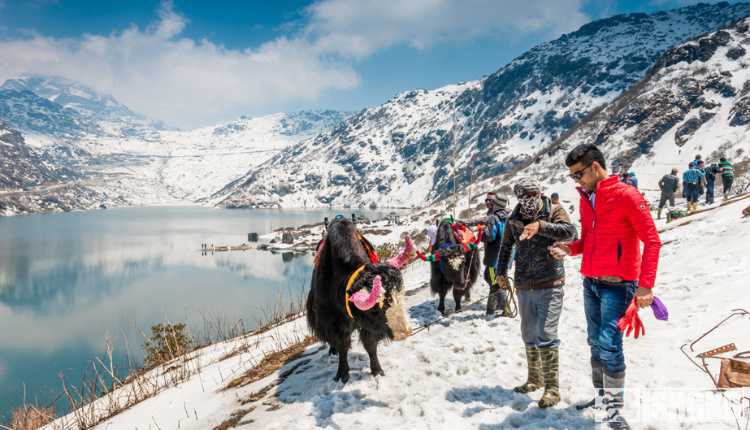 If Gurudongmar lake is too inconvenient for you to visit, the Changu lake is the next best option. This lake is also known as Tsomgo Lake and is near to Gangtok. It is considered a sacred and religious place in Sikkim as the mythological belief is that the spiritual gurus forecasted the state’s future by looking at the water’s colour in the lake. The best time to visit is between October and March when the whole area is covered with snow, and the lake is frozen. You can also visit the Nathula ( China border) pass and the Baba Harbhajan Singh temple. 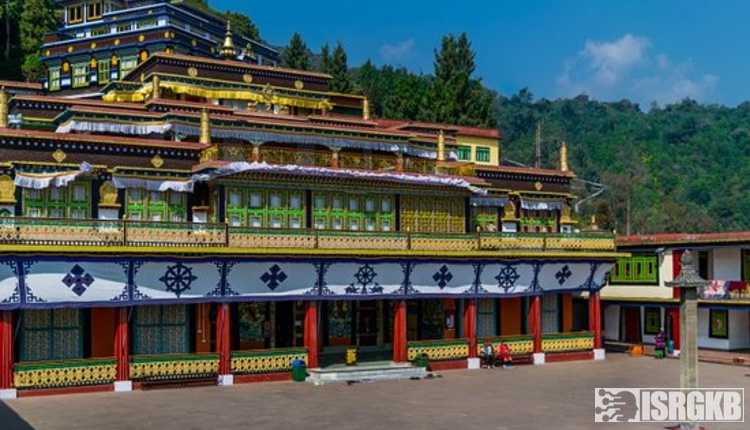 This monastery is one of the most famous and largest monasteries in this state full of monasteries. Rumtek monastery is also known as Dharma Chakra Center. It comprises of the stupa, school, temple, and several buildings for meditating. It is a beautiful traditional Buddhist monastery. Major Buddhists festivals are celebrated here with great galore and joy. Traditional religious dances are done there in the main courtyard of the monastery.

9. In and around Gangtok 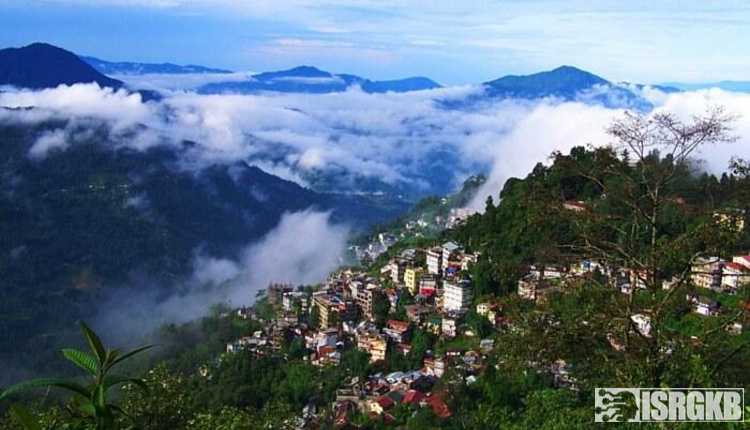 The capital city of Sikkim also has several activities and places to offer. From the very famous and clean MG Marg to the ropeway, which gives a 360 view of the city. The traffic is the only low point of the city; otherwise, it is a great place to vacate with family and friends. The city also has a few monasteries including Palace monastery and Tibetology. On the city’s outskirts, you can find destinations such as Jhakri falls, Ganesh Tok, Tashi Viewpoint and can also go for a chilling cycling ride. When you are in MG Marg, you should definitely try the famous momos, Thukpas, Faley, and traditional Nepalis thali. 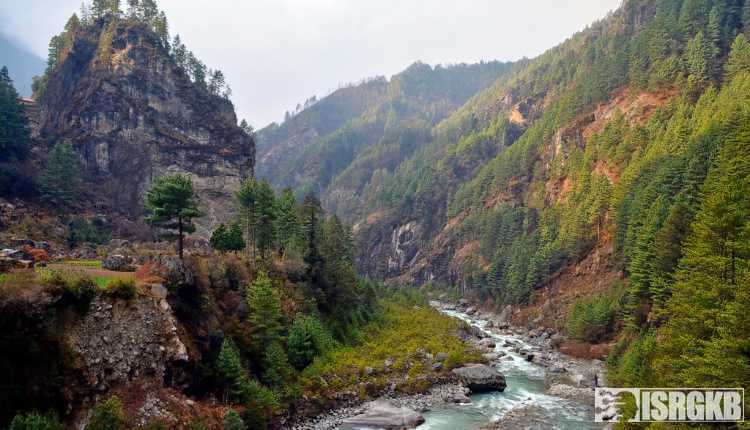 Tinjure is a part of the Fambong Lho Wildlife Sanctuary. It is the nearest trekking destination from Gangtok, only about three hours away. It’s a very organised and easy trek, best for beginners since it is only a one-day trek. It gives a calm retreat from the busy city life. There are small huts and dorms available with all facilities. The view from the top of the peak is also breathtaking. From Tin Jure’s viewpoint, you can get the whole view of Gangtok, which is in the opposite mountain.