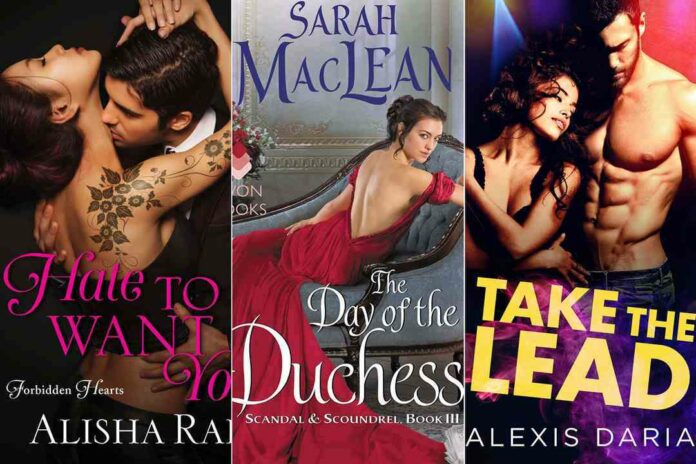 LOVE to read? A book worm? Can’t stay away from books? But why always the same boring stories? Spice up your choice with a pinch of Romance. Here, today you will be discovering a whole new list of Romance novel in Classic and Modern genre. I will represent to you the best and top classics as well as modern day romance tales. So, pull up your socks and lets get started…! 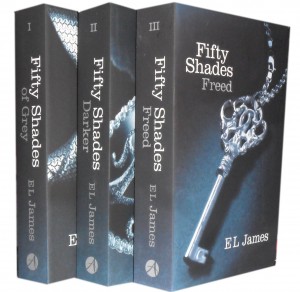 The first installment of the series deals with the on and off relationship of a 21-year-old college graduate Anastasia Steel and a hardcore businessman Christian Grey.

Literature student Anastasia Steele’s life changes forever when she goes to interview the young entrepreneur Christian Grey.Taking a good observation on him Anastasia finds Christian very intimidating but soon the characters develop an attraction for each other and Christian proposes Ana for a different kind of relationship that she didn’t expect. Christian, who was obsessed with certain sexual attributes, tells her that he wasn’t interested in any romantic relationship, but a purely sexual one.As their relationship progresses, Ana realises many aspects of Christian and falls for him.Christian on the hand warns Ana to not expect for more. A consistent struggle to find compatibility leaves Ana confounded and fatigued. Devastated, Ana leaves Christian and returns back to her apartment.

The book starts in the aftermath of Ana and Christian’s breakup.

Daunted by the singular tastes and dark secrets of Christian Grey Ana breakup with him and starts her new job in Seattle Independent Publishing House(SIP).But desires for Christian still builds up.After three days of her broken relationship Ana gets an Email from him asking her if she needs a ride to Jose’s gallery exhibit in Portland, which she had totally forgotten about.Christian proposes Ana with a new arrangement which she could not resist and the pair ends up being together and Anastasia learns more about the past of Christian.

Now, Christian and Ana have it all- passion, wealth, love, intimacy and a world of potentialities for their future. However Ana is aware of that caressing her Fifty Shades won’t be a simple task, which bring along can create challenges that neither of them would  envision. Ana should somehow learn to share Christian’s way while not sacrificing her own identity. And Christian should overcome his compulsion to manage as he wrestles with the demons of a tormented past. Just once it appears that their strength alone can eclipse any obstacle, misfortune, malice, and fate conspire to form Ana’s deepest fears intercommunicate reality. 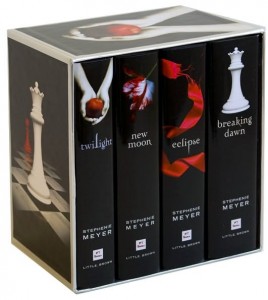 The first book of the installment defines an innocent love forming between two people belonging to two totally different worlds. One is the ravishing protagonist Isabella “Bella” swan and the other is the Immortal Edward Cullen.

The story begins when the 17-year-old Bella moving to her father “Charlie Swan” to forks, Washington disturbed by the fact that her mother “Renee Dwyer” has remarried. Bella now joins college and sees the inhumanly beautiful Edward for the first time. Bells at first thinks negatively about him but soon starts to develop feelings for him but Edward is distant and cold and warns Bella to stay away from him and now Bella is bewildered. It is when Edward saves her from a car accident that she realises there is something strange and completely unnatural about him. Later  a close friend of her “Jacob Black” enlightens her with the fact of Cullen’s being VAMPIRES but  Bella has now developed very strong feelings for Edward and despite Edward revealing the truth to Bella in person she decides that she doesn’t care as long as she loves him and knowing that Edward also feels the same for her they get into a very intense and dangerous relationship where they will be facing challenges that poses threats to Bella’s life.

This book deals with the broken relation of Bella and Edward and the new forming friendship between Bella and Jacob.

Edward, in order to protect Bella from all evils moves away from forks leaving Bells startled with his last words saying that he longer loves her so that she moves on in her life. Bella now is leaving with her loneliness missing Edward from past and feeling his present in present many a times. Bella’s loneliness is overtook by Jacob’s deepening friendship. Bella too now enjoys being with Jacob but could she ever take Edward out of her heart? On the other side a misunderstanding makes Edward believe that Bella is dead. Unable to tolerate the pain of of losing his only true love Edward surrenders himself to Volterra, Italy well aware that they are the vampire royalty who are capable of killing him. Bella now wants only one thing that is to save Edward and have him back to her forever.

This book explores Bella’s compromising between her love Edward and Friend Jacob.

Seattle, is being attacked strangely by some newborn vampires unable to control their thirst for human blood. Bella misses Jacob but Edward would not allow her to meet him fearing Jacob might hurt her. Bella knows that would never do such things to her and visits Jacob without letting Edward know and returns back unharmed. Edward now is now convinced and allows her to meet him. At next, Bella is confronted with Jacob’s feelings for her. Bella is enjoying her relationship phase asks Edward to take it to the next level. Edward agrees to try until they get married. Jacob overhears their engagement conversation and wants to end his life. Bella insist on him not to do so and agrees to kiss Jacob. Bella now realises that she is in love with both the man.Who would she choose between the two?

As Bella and Edward gets married leaving a broken Jacob behind it’s like a dream come true to them making the very impossible “possible” to happen. But how are they going to resist their urges to do more? Both of their lives takes a turn when Bella finds herself getting pregnant. With no other choice she decides upon taking the unborn to the world. But Edward knowing the consequences does not want her to do that. He only considers her to be his world how will he survive if his world gets destructed and the time comes when Bella is on the edge of death but Edward in hope of not losing her takes a major decision of turning Bella into a Vampire and welcomes her to a whole new world. The  world of the Immortals. But challenges are yet to be faced, the challenge of saving the life of their lovely daughter Renesmee.

The story revolves around 4 main characters Jane and Bingley/Elizabeth and Darcy. 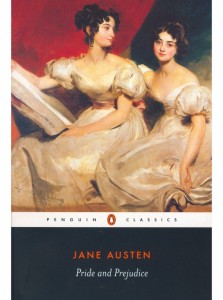 The story starts up with a heated news of a young and fortunate men’s arrival to Bennet’s neighbourhood. Mother of 5 daughters Mrs. Bennet wishes Bingley to fall for one of her daughter including Elizabeth and Jane. Her plans seems to work when she gets to know that Mr. Bingley was about to show up at the Ball. She insists both Jane and Elizabeth to go there and two agrees. Here Bingley for the first time sees Jane and falls for her charms and beauty. Bingley has a friend named Darcy as good looking and fortunate as him who has hots for Elizabeth but Elizabeth finds him sullen and insatiable. she loaths Darcy and the loathness grows even more when John Wickham an old friend of Darcy tells Elizabeth a false story about Darcy cheating on him for inheritance and like that Elizabeth falls for Wickham not aware of the further damages he will do. Mr. Bennet’s property is acquired by a relative of them named Mr. Collins who ends up getting married to a close friend of Elizabeth-Charlotte.

A day comes when Darcy proposes to Elizabeth realizing how much she has affected him bur Elizabeth loathing him due to the false stories told by Wickham rejects his offer. Darcy  convinces Elizabeth that Wickham is telling her a total lie and that he is a Evil man. Elizabeth believes Darcy when Wickham elopes with Lydia and Darcy help Elizabeth with every possible way to get Lydia back. Darcy succeeds to do the same by paying Wickham a desirable amount. Knowing about the good deeds of Darcy Elizabeth feelings for him. On the other hand Jane and Bingley’s relationship gets back in pace and Elizabeth too agrees to marry Darcy. Thus the couples ends up marrying each other.

A poor orphan girl raised torturously by her aunt Mrs. Reed and later at young falls for a married man. 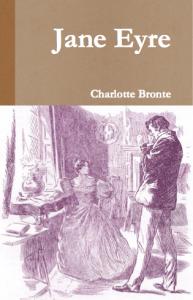 Jane is an orphan who is raised by her cruel and evil aunt. One day when Jane messes with a cousin and son of Mrs. Reed-John Reed she is instantly putted in The Red Room for sufferings. She experiences paranormal and unnatural things happening to her that she believes is done by her uncle late Mr. Reed. Not able to tolerate the trauma she faints and is taken out only to get checked by Mr. Lloyd. Mr. Lloyd suggests Mrs. Reed to send Jane to a school away from her and to Jane’s delight she agreed. Next Jane finds herself at Lowood School with a bunch of new people and a professor Mr. Brocklehurst (a carbon copy of Mrs. Reed). But here she finds her only friend Bessie too who soon dies due to an epidemic leaving their boundless friendship to end. Brocklehurst too soon departs. Brocklehurst’s position is taken by someone else giving Jane’s life a scope to improve. With a new improved life Jane spends next six years of her life studying in the school and two years teaching in the school.

After that Jane starts to work as a Governess for Mr. Rochester, teaching  a girl Adele. Jane starts to fall for Rochester but soon is shattered in pieces when he bring a women named Blanch Ingram to home. She thinks that Rochester might have planned to propose Blanch but instead she herself is proposed. Though on the marriage day Jane is confronted by a truth told by Mason claiming himself to be Bertha’s brother. He tells Jane that Bertha is alive and is kept imprisoned by Rochester from a long period. Rochester agrees to Bertha being alive but reveals that he has kept her locked because of her wild madness. Jane not able to believe decides to flee away.

Eloping from Thorn field Jane meets her three cousins Mary, Diana, St John Rivers who happen to give her help shelter and John finding a job for Jane. Jane decides to equally divide her fortune to all her cousins which her uncle had before dying left for her. John expresses his wish to travel India to Jane and insists her to come with him as her wife. Jane rejects his offer not able to forget the love she had once shared with Mr. Rochester. One day Jane hears Rochester’s painful and needy voice and immediately realizing runs to Thorn field finding it to be burned by Berth Mason. Jane finds Rochester helplessly lying on the floor with lost eye sight and with only one arm that he loses while attempting to save the two servants from fire. Jane takes Rochester to his new residence Fernedean and their relation eventually starts to build up and soon both gets married. Hence lives peaceful and happy life with a son whom Rochester could see with one eyesight visible.