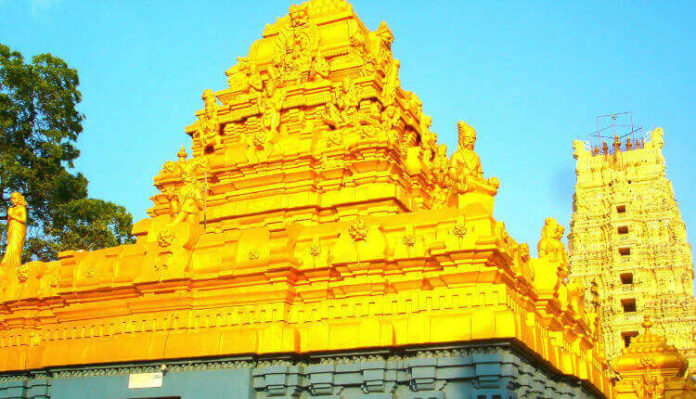 Palakollu, situated in West Godavari district of Andhra Pradesh boasts of an important pancharama temple. The place is a buzzing business town, easily accessible via rail and roadways. Palakollu has a railway station (station code: PKO) and a bus stand. The temple is very near to the bus stand and about 2 km from the railway station. Palakollu is well-connected with the rest of Andhra Pradesh with direct buses and trains.

The mythological relevance of Sree Ksheera Ramalingeswara Temple in Palakollu dates back to Krutayuga. According to the legend demon, Tarakasura performs penance to Lord Siva and gets the boon of immortality. Lord Siva bestows him atmalinga. Tarakasura cannot be killed by anyone who is born in a woman’s womb. He is unconquerable because of the atmalinga, which he wears always. Devatas could not withstand the atrocities of Tarakasura and pray Lord Vishnu for a solution. Lord Vishnu suggests that devatas should pray Kumara Swamy to kill Tarakasura as he is not born out of any woman’s womb.

Historians believe that the temple is built around 918 AD during the reign of Chalukya Bhima I (892AD-922AD). Dynasties such as Chalukyas, Reddies, Kakateeyas and several other kings have given ample donations to the temple. There are 46 stone depictions describing the temple history dating the period between 1136AD-1640AD).

The main attraction of the temple is the gopuram (tower). It is built on 14-4-1777 by a devotee, Batchu Ammayya. It has 9 stories and measures 120 feet. Beautiful sculpture adorns the tower.

Inside the inner sanctum (Garbha Gruha), Gokarneswara and Vigneshwara (Ganapati) alayas are situated at the left with Kshiralingam located at the centre. To the right, Subramanya Swamy and Janardhana Swamy alayas with Nandi at the centre are situated. The Shiva Lingam (Moola Virat) can be seen from all the four sides through windows in the Garbha Gruham. Additionally, Sun God, Kashi Vishweshwara, Goddess Parvathi, Goddess Lakshmi, Nagareshwara Lingam, Dundi Vigneshwara, Veera Bhadra, Sapta Matruka, Kanaka Durga, Brahma, Saraswathi, Kumara Swamy, Kartikeya, Mahishasura Mardhini, Naga sarpa (Serpent God), Nataraja, Sri Dattatreya, Kala Bhairava, Shaneeshwara, Adishankara, Radha, Nageswara and Lord Krishna can also be seen in the temple. All these deities have individual temples along the main corridor of the temple.

Mahasivaratri is celebrated here with much fervour. Pilgrims from all over India throng to the temple in the auspicious Karteekamasa (October-November). APSRTC runs special buses to facilitate visitors during the time. It is usual for the devotees to visit all the pancharamas in Karteekamasa.