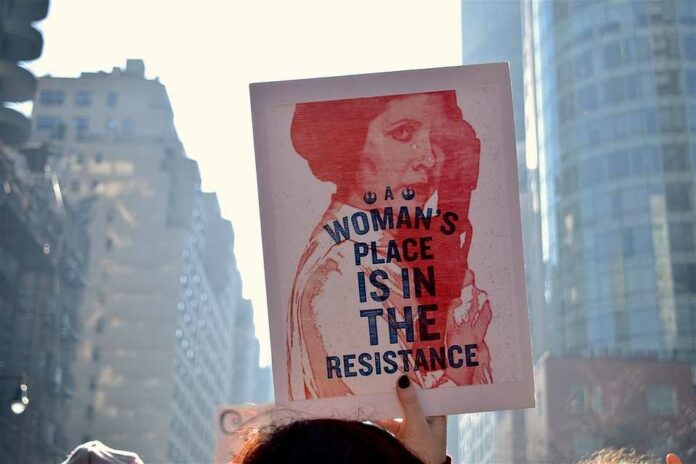 The concern for Women Economic Empowerment and ensuring equality has been a priority in the agenda of many national, non-governmental as well as international agencies. Empowerment and equality can be achieved when women’s productive role gets due recognition through their integration into paying employments. Still, the overemphasis on the reproductive roles of women has undermined their position in the labour market. No, doubt women contribute significantly to the economy, but their contribution often goes undervalued and unrecognised. The common notion that goes is the “Breadwinner man and the Homemaker woman”.

Women are often estimated as unproductive members of society, and their labour input goes undervalued. Despite significant progress in recent decades, the labour market across the world remains undivided between gender lines, and progress towards gender equality seems to have stalled.

Female labour force participation (FLFP) has remained lower than male participation, women account for most unpaid work, and when women are employed in paid employment, they are over-represented in the informal sector and become the most vulnerable to poverty.

ALSO READ: Challenges that are faced by every Women in India

What are the challenges to women’s workforce participation in India?

Women in India face enormous challenges for their participation in the economy; some of them are listed below:

Gender Inequality starts from the family itself. The men are allotted with outdoor economic activities, fulfilling the material needs of the family, taking vital decisions are the vocal duties of males, while women have a feeble role in all this. The women’s reproductive ability imposes them to become good wives, mothers, caregivers and family managers.

Cooking, cleaning, carrying fuel, fodder, and water are their earnest duties. Their physical power is glamorised in providing difficult jobs but within four walls of their household. They lack bargaining power and are denied to demand for any economic return.

The social norms and patriarchal values restrict women’s entry into the labour market.

Labour market itself has its gender orientation. It takes the production, reproduction prescriptions to favour males on the pretext that they are economically more vibrant and contributing than the females. The labour market holds women’s socialisation is for child-rearing, domestic management and they have low aspirations in comparison to the males.

Women’s commitment to the family is an accepted value while males devotion to and innovations in the workplace are given better vintage. So labour force accommodates more men for substantial, non-traditional and technical activities. Further, women become the ultimate victim of labour displacement. Man’s movement has given a second thought with the idea that he is the breadwinner and upon his labour force participation depends on the survival of the entire family.

The labour market is hostile to women in India. It denies equal wage for equal work for the women and positions of prominence for the women. This discourages women’s participation. The sex-based division of labour produces earning discrepancies between men and women. Men are conceived to be the pivot of production while women as central of reproduction.

Though mainstreaming efforts are on for women in the labour market, but the traditional mindset has not been completely eroded. Till now, women are fitted into lower-paid jobs, devote less time to production and concentrate more on domestic management and due to reproductive responsibilities, lack adequate skill and training which fetch them lesser pay than men.

ALSO READ: Why Women Empowerment has Become so important!

Glass ceiling becomes a common practice for women in corporate professionals. It refers to the method by which women are prevented to go up incorporate hierarchies regardless of their qualifications and achievements. Job mobility is restricted because they remain off the corporate ramp to build families and have failed to devote their lingering time in their corporate profession. Again the glass ceiling operates on the production, reproduction contradictions.

Security measures least cover women. As women are less accommodated in organised sectors, they fail to enjoy social security. Women are housed in large numbers in informal areas where social security is absent. Further, hire and fire, vulnerabilities and exploitation are maximum for women which they accept because of their casual sector work. They seldom have a union for collective bargaining.

Lack of education, training and skill of women due to poverty and household burdens becomes the preventing forces for women’s entry into the labour market.

High fertility rates among women in India affect their joining in the employment market. Due to recurrent childbirths and due to lack of spacing, women in India not only become physically weak but also overburdened with childcare responsibilities which prevent them from entering into the workforce.

The gradual deterioration of the agricultural and handicraft sectors has closed down the employment opportunities for women in rural India. Low level of access and control over resources among women also keep them disempowered, and they fail to join the labour force.

Social norms of our country also restrict women to work. Husbands and in-laws often discourage women from working, while in many parts of country restrictions are imposed even on their movement outside the household. That is why labour participation is particularly low in India among urban educated women. Social variables play a significant role in this direction. Labour force participation is more among a middle-aged, lower cost and lower educated women from low-income families.

Significant steps must be taken to make women integrated into the labour market as work participation is beneficial for women as well as society. Women’s full integration into the economy is a desirable goal of equity and efficiency considerations.