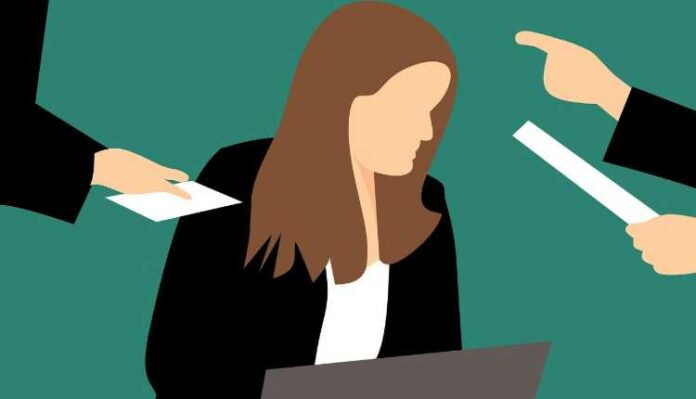 In the present day, bullying has become a common practice all over the country, and for the new generation it is known as “New Normal”. But, there is a type of bullying that is never considered as traumatic for the individual and even not considered as an aspect of bullying, which is known as “Workplace Bullying“. In this article, there is an emphasis on workplace bullying, its effects on the individual’s life, and how at one point in time, it gets converted into Social Harassment.

Workplace Bullying refers to harmful, targeted behaviour with a motive to personally hurt or insult someone at the place of work. It can include, targeting, mocking, spying, insulting in front of everybody, always putting the individual down, degrade, or intimidating. It can even become a habit of an individual to bully someone or a few people in the workplace; this can also refer to imposing one’s thoughts and beliefs on the other person by means of aggression or threatening. During the COVID-19 pandemic, there has been an increase in cyberbullying seen.

What are the Examples of workplace bullying?

Sometimes, we confused workplace bullying by expressing your own ideas or beliefs with attitude and confidence. But, this is not any type of bullying instead it is known as Assertiveness which is an important life skill, but when this expressing of thoughts and ideas gets converted into imposing yourself on the other person who is somehow affecting the other person’s mental well-being and breaking down their self-esteem and confidence. Then, this type of behaviour is known as Workplace Bullying. But, the main question here arises is how one can know that it is a type of bullying?

Does workplace bullying have converted into bullying as social harassment?

Yes, especially in the workplace domains, bullying has now become social harassment which includes tampering person’s self-esteem and confidence, Insulting the person in front of the whole social group, discriminating the person’s on their skin colour, body shaming, showing disgust, degraded comments which somehow affects the person’s mental well-being and even stop them going outside in social engagements and even taking professional help if they are suffering from depression, anxiety disorder, panic attacks or post-traumatic stress disorder experienced due to workplace bullying and this whole process leads to a big Stigma on mental illness which heads up curbing the expression of emotions or anxiety in society as society believed that it would unleash forces which can affect its social norms and regulations. A large number of employees face bullying every day in their places of work and according to a survey done by a company revealed that more than 55% of employees experience bullying at their workplace’s everyday which can include false accusations, social harassment, and constant criticisms by their managers, or heads. The two most common bullying which employees faced includes false accusations which they, in reality, didn’t commit and it just imposed on the person to humiliate them or for the person’s entertainment followed by being ignored wherein their ideas, and comments are disregarded or not even considered.

How can workplace bullying traumatise the individual’s mental well being?

Bullying can really prove to be very dangerous and devastating for the targeted person, and it can even affect the person’s daily personal, social, and occupational functioning.

How it affects the mental well being and bring a range of effects and verge of emotions, we shall view in the points written below:

How to deal with bullying if one ever experienced it?

There are no legal laws in India to protect oneself from the bullying occurring in the workplace. But, these cases are dealt under different sections of Indian Penal Code which include, Section 399 that state about wrongful restraint which refers to becoming an obstacle in the way of the person or stopping them moving ahead in a particular direction, Section 340 that state about Wrongful Confinement, Section 506 which is a punishment for criminal intimidation that is an intention to harm somebody physically or mentally, Section 323 which include Punishment for voluntarily causing hurt to somebody in the workplace and Section 306 under abetment of suicide.

These are all the legal sections that are stated in our IPC but there are some pointers or ways which one can perform in order to deal with this kind of workplace bullying. Before following any of these ways, just firstly remind oneself that it is not one’s fault that one is being bullied or there is no problem in one’s appearance or one’s dressing sense which stimulates the bulling.

So, one can begin the action against bullying by taking these steps-

Bullying is not an entertainment or any type of fun; instead, it is traumatising and even death-causing.

So, STOP BULLYING, it is a heinous crime.