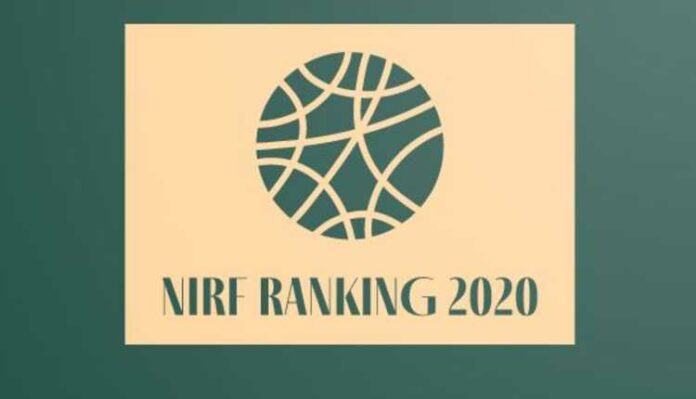 NIRF ranking of 2020 has been released by Human Resource Development Minister. Dr Ramesh Pokhriyal Nishank confirmed this. Consisting NIRF ranking has been listed for the last five years. For the first time this year, dental colleges have also been added to the NIRF rankings. The Central Government was requested by the Dental Council of India to list dental colleges as well. It has been told in the declaration that compared to last year, 20 % more colleges this year applied for a place in the ranking.

This time 3700 institutes have applied for ranking and very close to 5800 applications have reached the HRD. It can be guessed that the same institute had applied in other categories as well. The following are the institutes that have topped the NIRF rankings.

The NIRF ranking was first launched by the Union Human Resource Development Minister on 29 September 2015. The first ranking was released in 2016. Since then NIRF rankings are released every year.NIRF rankings are given based on the institution’s excellence. Institutes are awarded marks after examining various aspects. Although the NIRF ranking was released on April 8 last year, it was delayed this year due to Corona. Students get all other benefits from ranking institutes. If we talk about 2016, the list was released in only four categories, and it reached nine categories in 2020. JNU Vice-Chancellor Jagdish Kumar said that JNU retained its position for four consecutive years from 2017 to 2020 and the credit goes to the teachers and staff who brought JNU to this place through their hard work. Talking about the university category, Delhi Technological University got 45th place, and Guru Govind Singh Indraprastha University got 95th place.

Delhi University, which was ranked 13th last year, this year Delhi University secured 11th place in the University Rankings. About Jamia, Jamia was ranked 12th last year, but with its good results, Jamia Millia Islamia retained its position in the top 10 list. Jamia is ranked 10th in the NIRF rankings. Jamia also performed well in the overall rankings. Jamia was ranked 19th in the overall ranking last year, while the university got 16th rank this year. Jamia Vice Chancellor Najma Akhtar told in an interview that Jamia did well in view of the challenging situation. She said that it is possible only with a good education system and in the coming days we will show better by doing better. Centurion University of Technology and Management of Odisha has also got a place in the top 20 in India, and Centurion has also been ranked top 25 in engineering.

According to the report of Centurion University, 195000 students have been trained so far. University Vice-Chancellor Supriya Patnaik says that her goal is to prepare the youth for the future and to provide better training. Earlier, there was no government organization for ranking. The ranking was assessed by private institutions, But now all private and government institutions are ranked by the government on the basis of different standards.

Institutes topped the NIRF rankings in 2019:

Top 20 colleges in India and scores obtained by NIRF: