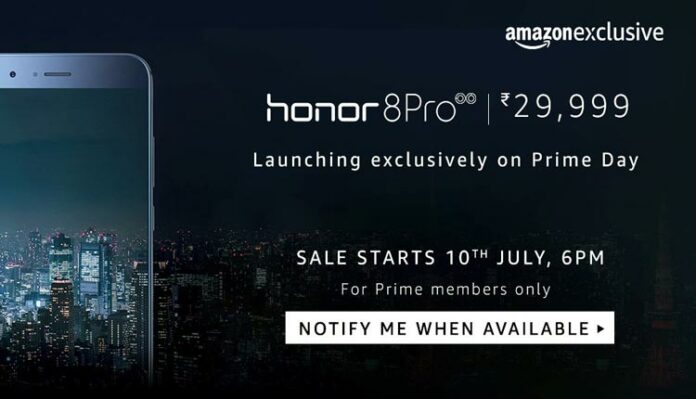 The company is giving some offers along with its new phone such as HDFC Credit and Debit Card holders and  Amazon Prime users can save extra bucks during the Sale Day on July 10 as the cashback up to 15 percent on purchasing this phone. With this, users can also buy this phone under the “No Cost EMI” Offer which require no down payment. Not only this, there is surprise and additional offer for the Vodafone users with this phone as Vodafone exclusively giving 45 GB of data for the period 5 months.

This phone has a dual camera setup with two rear sensors of 12 megapixels which are equipped with features like f / 2.2 aperture, laser Autofocus, LED flash and 4K video recording. Its one sensor takes RGB photos while the second takes monochrome photos along with this, the phone has an 8 megapixel front camera.

It has a 5.7 inch QUAD-HD LTPS LCD display with a resolution of 2560 x 1440. This phone is equipped with Kirin 960 (108 GHz 4 Cortex-A53 Cores and 2.4 GHz 4 Cortex-A73 Cores) Processor and 6 GB RAM. It comes with 128 GB of Internal Storage which is expandable up to 256 GB with MicroSD card. This phone runs on Android 7.0 Nougat which is customized by EMUI 5.1. This device is powered by powerful 4000mAh of battery. Fingerprint sensor and all other important sensors are present in the phone. For connectivity, features such as Bluetooth 4.2 and NFC 4G LTE, Wi-Fi, USB Type-C have been provided.

Great Flagship Killer at this price range which would definitely give tough competition to One Plus 5, but this Smartphone offers lots of features including too many sensors, MicroSD Slot, 4000mAh battery which One Plus doesn’t have. So, Get’s Ready for 10 July to grab this beautiful smartphone on Amazon.