Highlights Of Moto G5 Plus 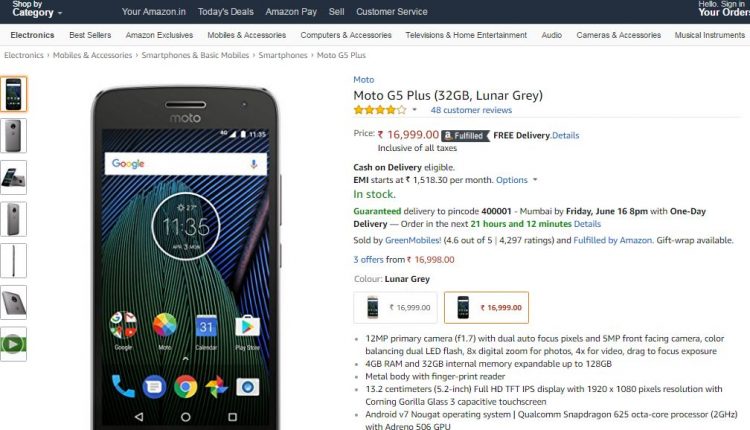 Amazon is only selling Moto G5 Plus 32 GB variant for Rs.16,999 in two colour options Lunar Grey and Fine Gold.in addition to that Amazon is giving exchange offers up to Rs.11800 off on the Purchase of Moto G5 Plus if you have an old smartphone that you want to exchange.

The Moto G5 Plus has compact sized 5.2″ Full HD display which measures 1920×1080 resolution protected with Corning  Gorilla glass 3. The smartphone is Powered by the energy efficient Qualcomm Snapdragon 625 Octa-Core Chipset clocked at 2.0 GHz Frequency with Adreno 506 GPU.This smartphone could easily handle all heavy games thanks to the SD625 Processor. As we have already mentioned that this device comes in two Variants 3GB/16GB and 4GB/32GB storage spaces which is expandable with microSD card up to 256 GB. Moto G5 Plus Runs on the latest Android Operating System, Nougat 7.0 out-of-the-box, this device also offers stock Android as Motorola always offers and the Smartphone Manufacturer said they will deliver regular updates as the newer version will be made available.

Moto G5 Plus is equipped with 12 MP rear camera with aperture f/1.7, 1.4-micron pixel-size, dual AF pixels and LED flash,On the Front,5 MP camera for shooting selfies and video calls. This smartphone also have nano coating for water grills to protect smartphone. 3000 mAH Battery with support of Turbo Charger which is  enough for a day. SD525 is very efficient Mid-Range Balanced Processor in terms of Battery Performance and Gaming Capabilities. Most of may get a bit disappointment as this device also comes with a non-removable battery,but the back cover is removable. Other features of Moto G5 Plus include GPS, 4G VoLTE, Dual Sim, MicroSD Card slot which doesn’t offered by most of the smartphones Today.

Now You can buy Moto G5 Plus for Rs.16,999 on Amazon India, this device can also be bought from Flipkart. Amazon is giving exchange offers and now it’s upon the customer to choose Amazon or Flipkart to Buy this smartphone. Also smartphone has some minor down-sides, but overall this device has brilliant features.