Why Sauces are Essential Ingredients? 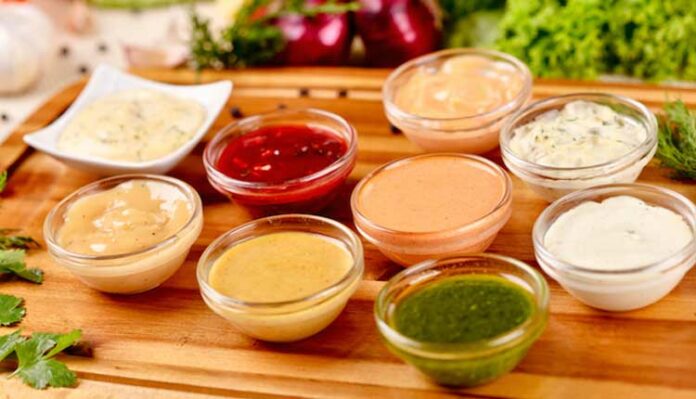 Sauces are defined as liquids or semi-liquid mixtures which are flavored from stocks. They have a keen sense of taste, texture and require a strong hand of blending. The sauce is essentially a moist or liquid component which is served along with the dish in contrasting or complementary flavors.Grimande de la Royere, a great philosopher and gastronome wrote: “The sauce to culinary art is like what grammar is to language”. A perfect sauce has the colorful appearance, smooth, velvety texture, and a definite taste as well as a distinct flavor. It complements the food it accompanies.

Grimande de la Royere, a great philosopher and gastronome wrote: “The sauce to culinary art is like what grammar is to language”. A perfect sauce has the colorful appearance, smooth, velvety texture, and a definite taste as well as a distinct flavor. It complements the food it accompanies.

Sauces are classified on the basis of their application or the degree of heat at which they are prepared. The four key categories of sauces are:

White or Béchamel Sauce: The sauce consists of milk thickened with a roux ( a mixture of equal quantity of butter and refined flour cooked together). Marquis Louis is said to have invented Bechamel sauce in the 17th century.

Espagnole meaning ‘Spanish’ in French was the original brown sauce and still is one of the glories of French Kitchen. Its name dates back to the 18th century. It is prepared by thickening brown stock with a brown roux (equal quantity of butter and flour cooked together up to brown color).

It literally means ‘Velvet’. It is a light blond sauce made from the stock of chicken, fish or beef/veal thickened with a blonde roux (equal quantity of butter and flour cooked together up to blonde color).

It is more commonly associated with Italian cuisine as an accompaniment to pasta dishes. It is prepared with pork, tomato concasse, tomato puree and thickened roux.

Mayonnaise: It is the only cold sauce among all the mother sauces. It is an emulsified sauce based on egg yolks. A lot of care needs to be taken while preparing mayonnaise. If it is not handled properly, the sauce may get separated and get a curdled appearance. It contains oil, egg yolk, and vinegar or lemon juice. It is always kept at chilled temperature. This sauce is always served cold and thus forms the base for most of the salads and sandwich fillings. It is generally served with the dipping sauce with snacks.

These sauces are made and used in the kitchens since a long time. For instance, Chinese Soya sauce was manufactured in the 16th century BC and is widely used today. Many of them are secret recipes passed from generation to generation. The list of proprietary sauces includes:

Chefs today are responding to demands for lighter sauces or the sauces that are simpler, less rich and more easily prepared. Modern day sauces complement and enhances the flavor of the dish it accompanies, be it an egg preparation, a fish curry, a poultry based dish or vegetable based preparations. The examples of Contemporary Sauces include:

Points to remember while making a Sauce:

As a direct outcome of the rise of globalized cuisines, the Chefs these days avoid very creamy and flour based sauces.