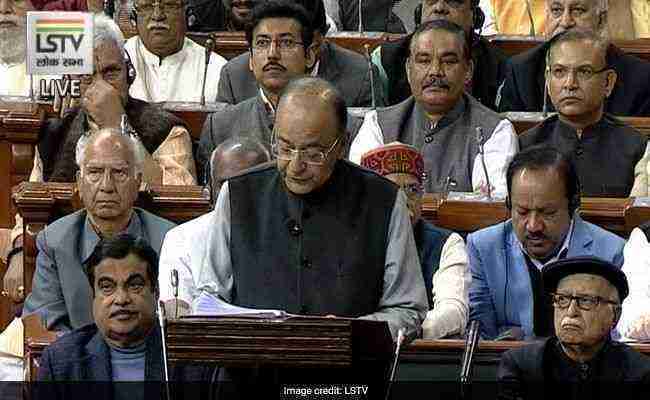 In the Union Budget 2018 Finance Minister Arun Jaitley makes important announcements for farmers, common man, students and women. Commenting on the budget presented by Jaitley, PM, Modi said it is developing friendly and strengthen The vision of “New India” by 2022.

The PM said the budget is farmers friendly, common citizen friendly, business environment friendly and will add to ease of living and ease of doing business.

The main head lines of Budget 2018 are as under

Agriculture got prime attention as presented by Finance Minister Arun Jaitley on Thursday. In his statement he outlined the schemes to promote agriculture, organic farming, animal husbandry and fisheries.

A number of announcements, including the minimum support price for farmers, easily accessible markets, disposal of crop residue and development reforms were made in the speech.

Jaitley said ” We consider agriculture as an enterprise and want to help farmers produce more from the same land parcel at lesser cost and simultaneously realize higher prices for their produce. Our emphasis is also on generating productive and gainful on farm and non farm employment for farmers and landless families”.

Jaitley said, referring to 86% of farmers in India efforts will be made to link them to market to get adequate remuneration for their produce. One of the steps for that will be setting the minimum support price at 1.5 times the cost of production of kharif crops.

Niti Aayog in consultation with the Central and State Government will be put in place, so that farmers will get an adequate price for their produce.

The Government plans to upgrade local Agri- markets and expanding e-NAM network to all Agriculture Produce Market Committee (APMCs) by March 2018. An Agri-Market infrastructure fund of Rs 2000 crore will be set up for developing 22,000 Gramin Agricultural Markets (GrAms) and 585 APMCs

The Government also plans to strengthen the physical infrastructure of local Agri markets through MGNREGA and other government schemes. Under Pradhan Mantri Gram Sadak Yojna (PMGSY) the government will make efforts to link villages and rural roads to agricultural markets, schools and hospitals too.

Mr. Jaitley also announced an increase in agricultural credit to Rs 11 trillion. He allotted Rs 500 crore under Operation Greens to address price volatility of perishable commodities like potatoes, tomatoes and onions. A sum of Rs 200 crore has been allocated to support organized cultivation of highly specialized medicinal and aromatic plants to aid small and cottage industries that manufacture perfumes, essential oils and other associated products.

The Finance Minister announced an allocation of Rs 2600 crore to insure irrigation facilities in 96 irrigation deprived districts besides funds to boost fisheries and animal farming. The corpus fund available to women in self help groups (SHGs) in 2016-17 was 42,000 crore, which would be increased to Rs 75,000 crore by March 2019.

The Finance Minister said that special schemes will be implemented to support the efforts of governments of Haryana, Punjab, Uttar Pradesh and NCT of Delhi to address air pollution and to subsidize machinery required for on-site management of crop residue. Rs 1290 crore is allotted for re – structured National Bamboo Mission announced to promote the bamboo sector in a holistic manner.

In the announcement of Budget 2018, the Finance Minister said that education is the priority area for government. He announced various benefits for students and education sector in India and allocated Rs 85,010 crore to the education sector, in which 35,010 cursors has been earmarked for higher education and 50,000 care for school education.

Jaitley said the country is looking to spend Rs 1 trillion to revitalize the infrastructure of higher educational institutions. He proposed to launch “Revitalizing Infrastructure and Systems in Education ” (RISE) by 2022 with a total investment of Rs 1,00,000 crore in next four years.

He further mentioned that a Higher Education Financing Agency (HEFA) would be suitably structured for funding the RISE initiative. To enhance the education of tribal people and Schedule tribes, he announced that every block with more than 50% ST population and at least 20,000 tribal people will have Eklavya Schools at par with Navodya Vidyalas by 2022.

For top 1000 Btech students A Prime Minister Fellowship Scheme was also announced in the country to provide the opportunity to pursue a PhD and IITs and Indian Institute of Sciences (IISc) with handsome fellowship. To upgrade the skills of teachers, finance minister aims to use technology to improve the quality of education through the recently launched digital portal “DIKSHA”.

The Union Budget 2018 also aims to set 24 new Government Medical Colleges and Hospitals by upgrading district hospitals in the country.

From an individual point of view the budget 2018 is a major disappointment for the common man. No changes have been made in tax slab in 2018, it will remain the same as current slab. However, some relief has been provided to salaried taxpayers to increase personal disposable income and bring parity with self employed people by reintroducing a standard deduction up to Rs 40,000 per annum.

The tax exempt transport allowance up to 19,200 per annum and medical reimbursement up to Rs 15,000 per annum, which effectively results in a net deduction of taxable salary income of Rs 5800 The deduction towards health insurance premium or medical expenses has been increased from Rs 30,000per annum to Rs 50,000 per annum under Section 80D.

Annual tax savings to employees depending upon the applicable income tax rate would range from Rs 302 to Rs 2,081. An employee contributing to the NPS is allotted an exemption in respect of 40 percent to the total amount payable on closure of the account or on opting out.

Relief has been provided to senior citizen tax payers in the form of the new deduction for interest incomes on deposits with banks and post offices. Also, the deduction towards medical expenses for specified ailments or critical illness has been increased to Rs 1,00,000 from Rs 60,000 for senior citizens and Rs 80,000 for very senior citizens (80 years and above).

Finance Minister Arun Jaitley has allotted Rs 267 crore from 64 crore to Mahila Shakti Kendra under Protection and Empowerment of Women, while 500 crore has been provided for transfer to Nirbhaya Fund. 1.26 car girls have been benefited through Sukanya Samridhi Yojna accounts.

Union Minister for WCD Maneka Gandhi said that “increased allocation will help the Ministry fight malnutrition and provide safety for women and girls through expansion of various ongoing schemes”. Jaitley allotted Rs 24,700 crore to the Ministry of Women and Child Development (WCD) with malnutrition schemes as the main focus.

Under Ujwalla Yojna Free gas connections will rise to 8 crore connections from current 5 cores. The Finance Minister will also increase loans to women self help groups as much as 37%. Also the contribution to EPF for women employees will decrease to 8% from 12%, which gives them reason to cheer.