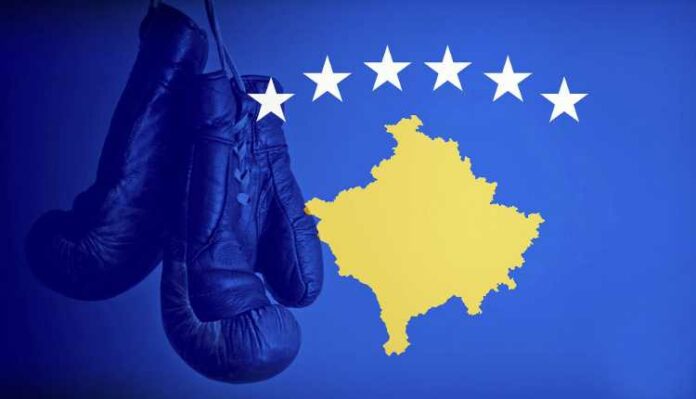 Kosovo was an autonomous province in the Republic of Serbia. Initially, the Kosovo Albanians revolved for making it from an autonomous region to a Republic; this led to atrocities and discrimination against the minority Serbs, which lead to the rise of a wave of—nationalism in Serbia. The events led to the end of autonomy of Kosovo in 1989. Subsequently, a new struggle for regaining the autonomy began in Kosovo. In 1991 and 1992, four out of six Republics in Serbia, namely Bosnia, Croatia, Macedonia and Slovenia, declared independence, which was a result of decades of brutal repressions by the dominant groups in the region; this gave a change of direction to the revolt and struggle in Kosovo, which now wanted independence from Yugoslavia.

The struggle in Kosovo was organised by the aid of League for a Democratic Kosovo (LDK) and was initially for several years political and non-violent. The LKD had all developed a parallel system of education and taxation system in Kosovo. However, not much was gained, and due to the lack of progress towards independence, the violence in Kosovo increased. Soon, the Albanians formed the Kosovo Liberation Army (KLA)which fought until 1999. Later, the tension between the militaries of Yugoslavia and Kosovo increases which led to the death of many Kosovo Albanians. Things became worse with the NATO bombing of Yugoslavia, after which the UN Security Council had o intervene, and they passed the Resolution 1244 (1999). It authorised the administration of Kosovo by the UN and also made a framework for resolving the political and legal status of Kosovo. This administration by the UN continued for the next nine years. However, even after various negotiations, the status of Kosovo as an independent territory is still inconclusive.

Declaration of Independence of Kosovo

The advisory by ICJ witnessed various reactions and criticism. Some countries recognised the Declaration of Independence made by Kosovo, out of which many believed it to be unique but at the same time lacking an ability to set a precedent. In contrast, many countries which did not recognise Kosovo reasoned that this could set a precedent for secession in other places. Meanwhile, Kosovo praised the verdict given by the court and expressed its desires to be recognised for membership in the EU and the UN. However, due to firm decision of Serbia to not agree with the advisory and to never recognise Kosovo as an independent state, a joint Serbia-European Union resolution was passed in the United Nations General Assembly for a dialogue between Serbia and Kosovo, which resulted in the formation of the 2013 Brussels deal that abolished institutions of Serbia in the territory of Kosovo.

While some countries like US, UK, Germany, France and Italy have agreed to recognise Kosovo as an independent State, many like Serbia, Cyprus, Russia and Romania have refused to do so. The refusing countries argued that recognising the secession of Kosovo and its secession would amount to a breach of international law.

India was among those countries which refused to recognise the Kosovo Declaration of Independence. However, it can be seen that India seems to have maintained a pragmatic approach over Kosovo, that is, by not recognising it and by also no denying its existence. The main reason for the refusal to recognise Kosovo can be seen in its implications to set precedents for many secessionist movements. Thus, while India has been witnessing secessionist movements, it cannot afford to promote the independence of countries wanting to secede like Kosovo. Hence, it tried to keep a more pragmatic approach to the issue of recognition of Kosovo as an independent State.

Kosovo has yet to fight for its recognition of an independent State. Events in history make it clear that secessions have been prevalent and will continue to be. Some famous examples are the succession of Pakistan in the partition of India in 1947, the independence of Singapore from Malaysia in 1965 and the formation of Bangladesh from Pakistan in 1971. Criticism that Kosovo would give rise to various new secessions seems rather absurd. It can be argued that while Bosnia, Croatia, Macedonia and Slovenia gained independence prior to Kosovo, the non-acceptance of the declaration could be steaming out of the violent path Kosovo had chosen. Thus, it can clearly be seen that the case of Kosovo highlights the importance and dependence of a State on international recognition and acceptance of its status.